Axelrodichthys is an extinct genus of mawsoniid coelacanth from the Cretaceous of Africa, North and South America, and Europe. Several species are known, the remains of which were discovered in the Lower Cretaceous (Aptian-Albian) of Brazil ,[1] North Africa,[2] and possibly Mexico,[3][4] as well as in the Upper Cretaceous of Morocco (Cenomanian),[5] Madagascar (Coniacian –Santonian)[2] and France (Lower Campanian to Lower Maastrichtian).[6][7] The Axelrodichthys of the Lower Cretaceous frequented both brackish and coastal marine waters (lagoon-coastal environment) while the most recent species lived exclusively in fresh waters (lakes and rivers).[6][7] The French specimens are the last known fresh water coelacanths.[7] Most of the species of this genus reached 1 metre (3 ft 3 in) to 2 metres (6 ft 7 in) in length.[1] Axelrodichthys was named in 1986 by John G. Maisey in honor of the American ichthyologist Herbert R. Axelrod.[1]

Like its close relative Mawsonia, Axelrodichthys is a coelacanth with an elongated, low, and wide skull, whose skull roof and cheek bones are characterized by strong ornamentation.[7] It differs from Mawsonia mainly in its more elongated parietonasal shield, the development of the descending process of the supratemporal, and by the shape and arrangement of the cheek and lower jaw bones. On the latter, the two posterior branches of the dentary are similar in length in Axelrodichthys while the lower branch of the bifurcation is much longer than the upper in Mawsonia. The contact area with the angular is also more extensive in Axelrodichthys.[8]

Several species of Axelrodichthys have been described. The validity of some of them is discussed and other specimens are left in open nomenclature because they are represented by specimens too incomplete for specific determinations. The genus includes the following taxa: 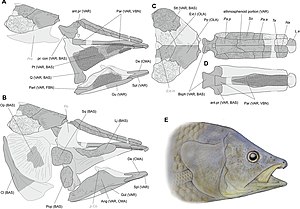 Axelrodichthys lived in different environments depending the species and the time. During the Lower Cretaceous, the species A. araripensis inhabited both brackish and coastal marine waters of western Gondwana. Indeed, the Romualdo Formation, where this species mainly comes from, was deposited in a coastal lagoon influenced by cycles of marine transgressions and regressions and a variable supply of fresh water.[9] At the end of the Upper Cretaceous, the species A. megadromos lived exclusively in fresh water (lakes and rivers), on the Ibero-Armorican island, an unsular landmass made up of much of France and the Iberian peninsula.[6][7][18] All the sites that yielded this species show no marine influence. Lower Campanian specimens come from lacustrine deposits, and Upper Campanian and Lower Maastrichtian specimens were found in river and floodplain sediments.[19][6][7] The remains of Axelrodichthys from the Upper Cretaceous of Morocco and Madagascar also come from freshwater sediments.[5][2] The arrival of the genus Axelrodichthys in the continental ecosystems of southwestern Europe probably occurred as a result of land connections that provided fluvial links between Europe and Gondwana.[18]

Little is known about the diet of mawsoniids. Although tiny teeth are present on the palate and the inner part of the mandible, the mouths of these fish are mostly toothless. As a result, some authors have speculated that they swallowed their preys using suction, such as the present-day Latimeria.[20] Other scientists have suggested that they may be filter feeders.[20] The description in 2018 of an articulated specimen of A. araripensis that swallowed a whole fish appears to confirm the suction technique.[21]

A phylogenetic analysis of the mawsoniids published in 2020 found a polytomy grouping together the Cretaceous genera “Lualabaea”, Axelrodichthys, and Mawsonia, as well as the Jurassic marine genus Trachymetopon. The genus “Lualabaea” could be congeneric with Axelrodichthys.[7]