Short description: Phylum of animals having a dorsal nerve cord

A chordate (/ˈkɔːrdeɪt/) is an animal of the phylum Chordata (/kɔːrˈdeɪtə/). All chordates possess five synapomorphies, or primary characteristics, at some point during their larval or adulthood stages that distinguish them from all other taxa. These five synapomorphies include a notochord, dorsal hollow nerve cord, endostyle or thyroid, pharyngeal slits, and a post-anal tail. The name “chordate” comes from the first of these synapomorphies, the notochord, which plays a significant role in chordate structure and movement. Chordates are also bilaterally symmetric, have a coelom, possess a circulatory system, and exhibit metameric segmentation.

In addition to the morphological characteristics used to define chordates, analysis of genome sequences has identified two conserved signature indels (CSIs) in the proteins cyclophilin-like protein and mitochondrial inner membrane protease ATP23, which are exclusively shared by all vertebrates, tunicates and cephalochordates.[5] These CSIs provide molecular means to reliably distinguish chordates from all other metazoan.

The Chordata and Ambulacraria together form the superphylum Deuterostomia. Chordates are divided into three subphyla: Vertebrata (fish, amphibians, reptiles, birds, and mammals); Tunicata or Urochordata (sea squirts, salps); and Cephalochordata (which includes lancelets). There are also extinct taxa such as Vetulicolia and Conodonta. Hemichordata (which includes the acorn worms) has been presented as a fourth chordate subphylum, but now is treated as a separate phylum: hemichordates and Echinodermata form the Ambulacraria, the sister phylum of the Chordates. Of the more than 65,000 living species of chordates, about half are ray-finned fishes that are members of the class Actinopterygii.

Chordate fossils have been found from as early as the Cambrian explosion, 539 million years ago.[6] Cladistically (phylogenetically), vertebrates – chordates with the notochord replaced by a vertebral column during development – are considered to be a subgroup of the clade Craniata, which consists of chordates with a skull. The Craniata and Tunicata compose the clade Olfactores. (See diagram under Phylogeny.)

The glass catfish (Kryptopterus vitreolus) is one of the few chordates with a visible backbone. The spinal cord is housed within its backbone.

Chordates form a phylum of animals that are defined by having at some stage in their lives all of the following anatomical features:[7]

There are soft constraints that separate chordates from other biological lineages, but are not part of the formal definition:

Anatomy of the cephalochordate Amphioxus. Bolded items are components of all chordates at some point in their lifetimes, and distinguish them from other phyla.

The following schema is from the 2015 edition of Vertebrate Palaeontology.[11][12] The invertebrate chordate classes are from Fishes of the World.[13] While it is structured so as to reflect evolutionary relationships (similar to a cladogram), it also retains the traditional ranks used in Linnaean taxonomy. 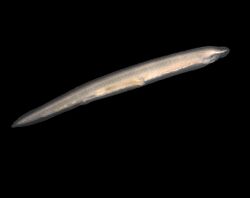 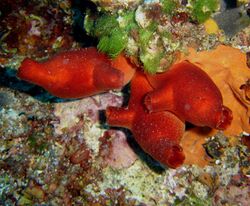 Most tunicates appear as adults in two major forms, known as "sea squirts" and salps, both of which are soft-bodied filter-feeders that lack the standard features of chordates. Sea squirts are sessile and consist mainly of water pumps and filter-feeding apparatus;[22] salps float in mid-water, feeding on plankton, and have a two-generation cycle in which one generation is solitary and the next forms chain-like colonies.[23] However, all tunicate larvae have the standard chordate features, including long, tadpole-like tails; they also have rudimentary brains, light sensors and tilt sensors.[22] The third main group of tunicates, Appendicularia (also known as Larvacea), retain tadpole-like shapes and active swimming all their lives, and were for a long time regarded as larvae of sea squirts or salps.[24] The etymology of the term Urochordata (Balfour 1881) is from the ancient Greek οὐρά (oura, "tail") + Latin chorda ("cord"), because the notochord is only found in the tail.[25] The term Tunicata (Lamarck 1816) is recognised as having precedence and is now more commonly used.[22] 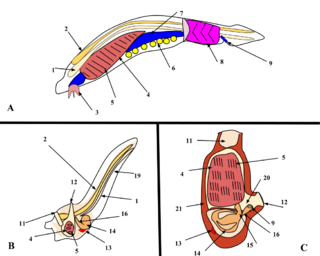 Craniates all have distinct skulls. They include the hagfish, which have no vertebrae. Michael J. Benton commented that "craniates are characterized by their heads, just as chordates, or possibly all deuterostomes, are by their tails".[26]

Most craniates are vertebrates, in which the notochord is replaced by the vertebral column.[27] These consist of a series of bony or cartilaginous cylindrical vertebrae, generally with neural arches that protect the spinal cord, and with projections that link the vertebrae. However hagfish have incomplete braincases and no vertebrae, and are therefore not regarded as vertebrates,[28] but as members of the craniates, the group from which vertebrates are thought to have evolved.[29] However the cladistic exclusion of hagfish from the vertebrates is controversial, as they may be degenerate vertebrates who have lost their vertebral columns.[30]

The position of lampreys is ambiguous. They have complete braincases and rudimentary vertebrae, and therefore may be regarded as vertebrates and true fish.[31] However, molecular phylogenetics, which uses biochemical features to classify organisms, has produced both results that group them with vertebrates and others that group them with hagfish.[32] If lampreys are more closely related to the hagfish than the other vertebrates, this would suggest that they form a clade, which has been named the Cyclostomata.[33]

Haikouichthys, from about 518 million years ago in China, may be the earliest known fish.[34]

There is still much ongoing differential (DNA sequence based) comparison research that is trying to separate out the simplest forms of chordates. As some lineages of the 90% of species that lack a backbone or notochord might have lost these structures over time, this complicates the classification of chordates. Some chordate lineages may only be found by DNA analysis, when there is no physical trace of any chordate-like structures.[35]

Attempts to work out the evolutionary relationships of the chordates have produced several hypotheses. The current consensus is that chordates are monophyletic, meaning that the Chordata include all and only the descendants of a single common ancestor, which is itself a chordate, and that craniates' nearest relatives are tunicates. Recent identification of two conserved signature indels (CSIs) in the proteins cyclophilin-like protein and mitochondrial inner membrane protease ATP23, which are exclusively shared by all vertebrates, tunicates and cephalochordates also provide strong evidence of the monophyly of Chordata.[5]

All of the earliest chordate fossils have been found in the Early Cambrian Chengjiang fauna, and include two species that are regarded as fish, which implies that they are vertebrates. Because the fossil record of early chordates is poor, only molecular phylogenetics offers a reasonable prospect of dating their emergence. However, the use of molecular phylogenetics for dating evolutionary transitions is controversial.

It has also proved difficult to produce a detailed classification within the living chordates. Attempts to produce evolutionary "family trees" shows that many of the traditional classes are paraphyletic.

Diagram of the family tree of chordates[8]

While this has been well known since the 19th century, an insistence on only monophyletic taxa has resulted in vertebrate classification being in a state of flux.[36]

A skeleton of the blue whale, the largest animal, extant or extinct, ever discovered, outside the Long Marine Laboratory at the University of California, Santa Cruz. The largest blue whale ever reliably recorded measured 98ft (29.9m) long. 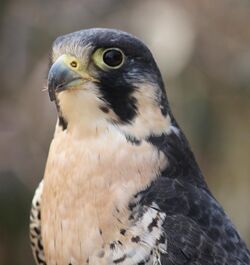 A peregrine falcon, the world's fastest animal. Peregrines use gravity and aerodynamics to achieve their top speed of around 242mph (389km/h), as opposed to locomotion.

Fossils of one major deuterostome group, the echinoderms (whose modern members include starfish, sea urchins and crinoids), are quite common from the start of the Cambrian, 542 million years ago.[41] The Mid Cambrian fossil Rhabdotubus johanssoni has been interpreted as a pterobranch hemichordate.[42] Opinions differ about whether the Chengjiang fauna fossil Yunnanozoon, from the earlier Cambrian, was a hemichordate or chordate.[43][44] Another fossil, Haikouella lanceolata, also from the Chengjiang fauna, is interpreted as a chordate and possibly a craniate, as it shows signs of a heart, arteries, gill filaments, a tail, a neural chord with a brain at the front end, and possibly eyes—although it also had short tentacles round its mouth.[44] Haikouichthys and Myllokunmingia, also from the Chengjiang fauna, are regarded as fish.[34][45] Pikaia, discovered much earlier (1911) but from the Mid Cambrian Burgess Shale (505 Ma), is also regarded as a primitive chordate.[46] On the other hand, fossils of early chordates are very rare, since invertebrate chordates have no bones or teeth, and only one has been reported for the rest of the Cambrian.[47]

The evolutionary relationships between the chordate groups and between chordates as a whole and their closest deuterostome relatives have been debated since 1890. Studies based on anatomical, embryological, and paleontological data have produced different "family trees". Some closely linked chordates and hemichordates, but that idea is now rejected.[8] Combining such analyses with data from a small set of ribosome RNA genes eliminated some older ideas, but opened up the possibility that tunicates (urochordates) are "basal deuterostomes", surviving members of the group from which echinoderms, hemichordates and chordates evolved.[48] Some researchers believe that, within the chordates, craniates are most closely related to cephalochordates, but there are also reasons for regarding tunicates (urochordates) as craniates' closest relatives.[8][49]

Since early chordates have left a poor fossil record, attempts have been made to calculate the key dates in their evolution by molecular phylogenetics techniques—by analyzing biochemical differences, mainly in RNA. One such study suggested that deuterostomes arose before 900 million years ago and the earliest chordates around 896 million years ago.[49] However, molecular estimates of dates often disagree with each other and with the fossil record,[49] and their assumption that the molecular clock runs at a known constant rate has been challenged.[50][51]

A specific relationship between Vertebrates and Tunicates is also strongly supported by two CSIs found in the proteins predicted exosome complex RRP44 and serine palmitoyltransferase, that are exclusively shared by species from these two subphyla but not Cephalochordates, indicating Vertebrates are more closely related to Tunicates than Cephalochordates.[5]

Phylogenetic tree of the chordate phylum. Lines of the cladogram show probable evolutionary relationships between both extinct taxa, which are denoted with a dagger (†), and extant taxa. Relatives of vertebrates are invertebrates. The positions (relationships) of the lancelets, tunicates, and craniates/vertebrates are based on the following studies:[52][53][54][55] 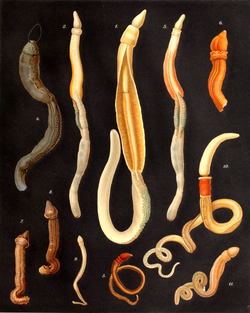 Hemichordates ("half chordates") have some features similar to those of chordates: branchial openings that open into the pharynx and look rather like gill slits; stomochords, similar in composition to notochords, but running in a circle round the "collar", which is ahead of the mouth; and a dorsal nerve cord—but also a smaller ventral nerve cord.

There are two living groups of hemichordates. The solitary enteropneusts, commonly known as "acorn worms", have long proboscises and worm-like bodies with up to 200 branchial slits, are up to 2.5 metres (8.2 ft) long, and burrow though seafloor sediments. Pterobranchs are colonial animals, often less than 1 millimetre (0.039 in) long individually, whose dwellings are interconnected. Each filter feeds by means of a pair of branched tentacles, and has a short, shield-shaped proboscis. The extinct graptolites, colonial animals whose fossils look like tiny hacksaw blades, lived in tubes similar to those of pterobranchs.[56]

Echinoderms differ from chordates and their other relatives in three conspicuous ways: they possess bilateral symmetry only as larvae – in adulthood they have radial symmetry, meaning that their body pattern is shaped like a wheel; they have tube feet; and their bodies are supported by skeletons made of calcite, a material not used by chordates. Their hard, calcified shells keep their bodies well protected from the environment, and these skeletons enclose their bodies, but are also covered by thin skins. The feet are powered by another unique feature of echinoderms, a water vascular system of canals that also functions as a "lung" and surrounded by muscles that act as pumps. Crinoids look rather like flowers, and use their feather-like arms to filter food particles out of the water; most live anchored to rocks, but a few can move very slowly. Other echinoderms are mobile and take a variety of body shapes, for example starfish, sea urchins and sea cucumbers.[57]

Although the name Chordata is attributed to William Bateson (1885), it was already in prevalent use by 1880. Ernst Haeckel described a taxon comprising tunicates, cephalochordates, and vertebrates in 1866. Though he used the German vernacular form, it is allowed under the ICZN code because of its subsequent latinization.[4]