Main page: Biology:Polymerase chain reaction
(This article assumes familiarity with the terms and components used in the PCR process.) 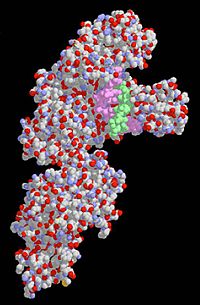 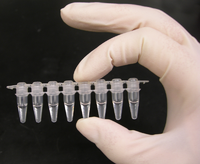 A strip of eight PCR tubes.

The history of the polymerase chain reaction (PCR) has variously been described as a classic "Eureka!" moment,[1] or as an example of cooperative teamwork between disparate researchers.[2] Following is a list of events before, during, and after its development:

"one would hope to obtain two structures, each containing the full length of the template strand appropriately complexed with the primer. DNA polymerase will be added to complete the process of repair replication. Two molecules of the original duplex should result. The whole cycle could be repeated, there being added every time a fresh dose of the enzyme." [10]

No results are shown there, and the mention of unpublished experiments in another paper[9] may (or may not) refer to the two-primer replication system. (These early precursors to PCR were carefully scrutinized in a patent lawsuit, and are discussed in Mullis' chapters in The Polymerase Chain Reaction (1994).[11])

By 1980 all of the components needed to perform PCR amplification were known to the scientific community. The use of DNA polymerase to extend oligonucleotide primers was a common procedure in DNA sequencing and the production of cDNA for cloning and expression. The use of DNA polymerase for nick translation was the most common method used to label DNA probes for Southern blotting.