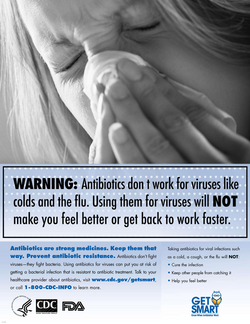 This poster from the U.S. Centers for Disease Control and Prevention "Get Smart" campaign, intended for use in doctors' offices and other healthcare facilities, warns that antibiotics do not work for viral illnesses such as the common cold.

Antibiotic misuse, sometimes called antibiotic abuse or antibiotic overuse, refers to the misuse or overuse of antibiotics, with potentially serious effects on health. It is a contributing factor to the development of antibiotic resistance, including the creation of multidrug-resistant bacteria, informally called "super bugs": relatively harmless bacteria (such as staphylococcus, enterococcus and acinetobacter) can develop resistance to multiple antibiotics and cause life-threatening infections.[1]

Antibiotics have been around since 1928 when penicillin was discovered by Alexander Fleming. In the 1980s, antibiotics that were determined medically important for treatment of animals could be approved under veterinary oversight. In 1996, the National Antimicrobial Resistance Monitoring System (NARMS) was established.[2] Starting in 2010, publications regarding antimicrobial drugs in food become an annual report. Starting in 2012, there was publicly solicited input on how data is to be collected and reported for matters relating to the use of antimicrobials for food-producing animals. Resulting from this, the FDA revised its sampling structure within NARMS with the goal of obtaining more representative livestock data for the key organisms under surveillance.[2] “NARMS partners at CDC and USDA have published over 150 peer-reviewed research articles examining the nature and magnitude of antimicrobial resistance hazards associated with antibiotic use in food-producing animals.” In 2014, the FDA began working with the United States Department of Agriculture (USDA) and the Centers of Disease Control and Prevention (CDC) to explore additional mechanisms to obtain data that is representative of antibiotic use in food-producing animals. In 2015, the FDA issues the Veterinary Feed Directive (VFD) final rule. Under this rule veterinarians must authorize the use of antimicrobials within feed for the animals they serve.[2] 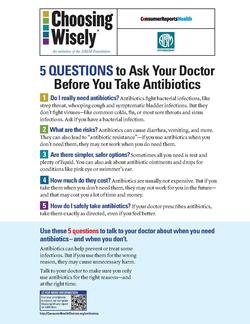 Health advocacy messages such as this one encourage patients to talk with their doctor about safety in using antibiotics.

Common situations in which antibiotics are overused include the following:

Antibiotics can cause severe reactions and add significantly to the cost of care.[10] In the United States, antibiotics and anti-infectives are the leading cause of adverse effect from drugs. In a study of 32 States in 2011, antibiotics and anti-infectives accounted for nearly 24 percent of ADEs that were present on admission, and 28 percent of those that occurred during a hospital stay.[11]

If antimicrobial resistance continues to increase from current levels, it is estimated that by 2050 ten million people would die every year due to lack of available treatment and the world’s GDP would be 2 - 3.5% lower in 2050.[12] If worldwide action is not taken to combat antibiotic misuse and the development of antimicrobial resistance, from 2014 - 2050 it is estimated that 300 million people could die prematurely due to drug resistance and $60 – 100 trillion of economic output would be lost.[12] If the current worldwide development of antimicrobial resistance is delayed by just 10 years, $65 trillion of the world’s GDP output can be saved from 2014-2050.[12]

Though antibiotics are required to treat severe bacterial infections, misuse has contributed to a rise in bacterial resistance. The overuse of fluoroquinolone and other antibiotics fuels antibiotic resistance in bacteria, which can inhibit the treatment of antibiotic-resistant infections.[14][15][16] Their excessive use in children with otitis media has given rise to a breed of bacteria resistant to antibiotics entirely.[17] Additionally, the use of antimicrobial substances in building materials and personal care products has contributed to a higher percentage of antibiotic resistant bacteria in the indoor environment, where humans spend a large majority of their lives.[18]

Widespread use of fluoroquinolones as a first-line antibiotic has led to decreased antibiotic sensitivity, with negative implications for serious bacterial infections such as those associated with cystic fibrosis, where quinolones are among the few viable antibiotics.[19][20][21] 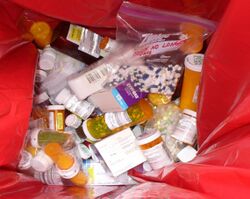 Antibiotics have no effect on viral infections such as the common cold. They are also ineffective against sore throats, which are usually viral and self-resolving.[22] Most cases of bronchitis (90–95%) are viral as well, passing after a few weeks—the use of antibiotics against bronchitis is superfluous and can put the patient at risk of suffering adverse reactions.[23]

Official guidelines by the American Heart Association for dental antibiotic prophylaxis call for the administration of antibiotics to prevent infective endocarditis. Though the current (2007) guidelines dictate more restricted antibiotic use, many dentists[24] and dental patients[25] follow the 1997 guidelines instead, leading to overuse of antibiotics.[26]

A study by Imperial College London in February 2017 found that of 20 online websites, 9 would provide antibiotics (illegally) without a prescription to UK residents.[27]

Main page: Biology:Antibiotic use in livestock

There has been massive use of antibiotics in animal husbandry. The most abundant use of antimicrobials worldwide is in livestock; they are typically distributed in animal feed or water for purposes such as disease prevention and growth promotion.[28] Debates have arisen surrounding the extent of the impact of these antibiotics, particularly antimicrobial growth promoters, on human antibiotic resistance. Although some sources assert that there remains a lack of knowledge on which antibiotic use generates the most risk to humans,[29] policies and regulations have been placed to limit any harmful effects, such as the potential of bacteria developing antibiotic resistance within livestock, and that bacteria transferring resistance genes to human pathogens [30] On January 1, 2017, the FDA enacted legislation to require that all human medically important feed-grade antibiotics (many prior over-the-counter-drugs) become classified as Veterinary Feed Directive drugs (VFD). This action requires that farmers establish and work with veterinaries to receive a written VFD order.[31] The effect of this act places a requirement on an established veterinarian-client-patient relationship (VCPR). Through this relationship, farmers will receive an increased education in the form of advice and guidance from their veterinarian.