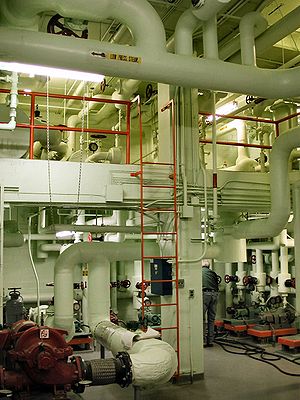 Within industry, piping is a system of pipes used to convey fluids (liquids and gases) from one location to another. The engineering discipline of piping design studies the efficient transport of fluid.[1][2]

Industrial process piping (and accompanying in-line components) can be manufactured from wood, fiberglass, glass, steel, aluminum, plastic, copper, and concrete. The in-line components, known as fittings,[3] valves, and other devices, typically sense and control the pressure, flow rate and temperature of the transmitted fluid, and usually are included in the field of piping design (or piping engineering), though the sensors and automatic controlling devices may alternatively be treated as part of instrumentation and control design. Piping systems are documented in piping and instrumentation diagrams (P&IDs). If necessary, pipes can be cleaned by the tube cleaning process.

Piping sometimes refers to piping design, the detailed specification of the physical piping layout within a process plant or commercial building. In earlier days, this was sometimes called drafting, technical drawing, engineering drawing, and design, but is today commonly performed by designers that have learned to use automated computer-aided drawing or computer-aided design (CAD) software.

Plumbing is a piping system with which most people are familiar, as it constitutes the form of fluid transportation that is used to provide potable water and fuels to their homes and businesses. Plumbing pipes also remove waste in the form of sewage, and allow venting of sewage gases to the outdoors. Fire sprinkler systems also use piping, and may transport nonpotable or potable water, or other fire-suppression fluids.

Piping also has many other industrial applications, which are crucial for moving raw and semi-processed fluids for refining into more useful products. Some of the more exotic materials used in pipe construction are Inconel, titanium, chrome-moly and various other steel alloys.

Process piping and power piping are typically checked by pipe stress engineers to verify that the routing, nozzle loads, hangers, and supports are properly placed and selected such that allowable pipe stress is not exceeded under different loads such as sustained loads, operating loads, pressure testing loads, etc., as stipulated by the ASME B31, EN 13480, GOST 32388, RD 10-249 or any other applicable codes and standards. It is necessary to evaluate the mechanical behavior of the piping under regular loads (internal pressure and thermal stresses) as well under occasional and intermittent loading cases such as earthquake, high wind or special vibration, and water hammer.[4][5] This evaluation is usually performed with the assistance of a specialized (finite element) pipe stress analysis computer programs such as AutoPIPE,[6] CAEPIPE,[7] CAESAR,[8] PASS/START-PROF,[9] ROHR2.[10]

In cryogenic pipe supports, most steel become more brittle as the temperature decreases from normal operating conditions, so it is necessary to know the temperature distribution for cryogenic conditions. Steel structures will have areas of high stress that may be caused by sharp corners in the design, or inclusions in the material.[11]

The material with which a pipe is manufactured often forms as the basis for choosing any pipe. Materials that are used for manufacturing pipes include:

Wooden pipes were easier to maintain than metal, because the wood did not expand or contract with temperature changes as much as metal and so consequently expansion joints and bends were not required. The thickness of wood afforded some insulating properties to the pipes which helped prevent freezing as compared to metal pipes. Wood used for water pipes also does not rot very easily. Electrolysis does not affect wood pipes at all, since wood is a much better electrical insulator.

In the Western United States where redwood was used for pipe construction, it was found that redwood had "peculiar properties" that protected it from weathering, acids, insects, and fungus growths. Redwood pipes stayed smooth and clean indefinitely while iron pipe by comparison would rapidly begin to scale and corrode and could eventually plug itself up with the corrosion.[14]

Stacking of a connected pipeline for transportation of oil products

There are certain standard codes that need to be followed while designing or manufacturing any piping system. Organizations that promulgate piping standards include: