The Volta potential is named after Alessandro Volta. 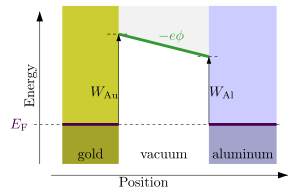 When the two metals depicted here are in thermodynamic equilibrium with each other as shown (equal Fermi levels), the vacuum electrostatic potential ϕ is not flat due to a difference in work function.

When two metals are electrically isolated from each other, an arbitrary potential difference may exist between them. However, when two different neutral metal surfaces are brought into electrical contact (even indirectly, say, through a long electro-conductive wire), electrons will flow from the metal with a higher Fermi level to the metal with the lower Fermi level until the Fermi levels in the both phases are equal. Once this has occurred, the metals are in thermodynamic equilibrium with each other (the actual number of electrons that passes between the two phases is usually small). Just because the Fermi levels are equal, however, does not mean that the electric potentials are equal. The electric potential outside each material is controlled by its work function, and so dissimilar metals can show an electric potential difference even at equilibrium.

Not to be confused with Kelvin clip. 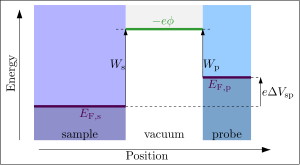 The Volta potential can be significant (of order 1 volt) but it cannot be measured directly by an ordinary voltmeter. A voltmeter does not measure vacuum electrostatic potentials, but instead the difference in Fermi level between the two materials, a difference that is exactly zero at equilibrium.