Global Research & Analytics – Irevna is an offshoring company based in India operating in the Financial Research & Analytics segment of the Knowledge Process Outsourcing (KPO) industry. It is known for its equity, credit, derivatives research for investment banking clients, actuarial support for the insurance companies and research support for corporates. According to Datamonitor's The Black Book of Outsourcing, survey participants ranked Irevna #1 in 14 of the 18 evaluation criteria [2009]

Founded in 2001, it is now a division of CRISIL Ltd (NSE:CRISIL, BSE:500092). CRISIL's majority shareholder is Standard & Poor's, a division of The McGraw-Hill Financial Companies and one of the world's providers of financial market intelligence.

In September 2010, CRISIL-Irevna signed an agreement to acquire Chicago-based Pipal Research Corporation (Pipal), another player in the KPO space for a consideration of $12.75 million. This marked the first acquisition of a KPO firm by a third party pure-play KPO firm. According to CEO of CRISIL Ltd, the acquisition was completely complementary in terms of research centers, business development centres and service offerings.:[1]

In June 2012, CRISIL GR&A acquired UK-headquartered Coalition Development Ltd. along with its subsidiaries (Coalition). Coalition provides high-end analytics, mainly to leading global investment banks. A change from the earlier GR&A service company acquisitions), Coalition, a premium product based company, was formed in 2002 and reported 2011 revenues of GBP 8 million. Subject to conditions, the acquisition was CRISIL GR&A's largest at the time of announcement and payout could reach GBP 29 million over 2 years.:[2] 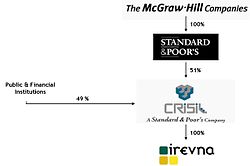 This above locations doesn't include Coalition Offices.

Founded in 2001, the company was initially known as Irevna Solutions Private Limited and was based out of Hyderabad, India . The company relocated to Chennai in 2003 and was renamed Irevna Research Services Pvt. Ltd. In 2005, CRISIL announced its intention to purchase Irevna Research Services for an initial cash payment of about Rs 43 crores (Approx US$8.6 Million, based on then USD-INR exchange rate).[6] The company has since been rechristened as Irevna, a division of Crisil. Subsequently, in 2011, the global research support units of CRISIL have been rebranded as "CRISIL – Global Research and Analytics" (Irevna and Pipal serve as exclusive brands for external clients; and a Captive unit)

Irevna moved to Chennai in 2002 with about 20 people. At the start of 2010, the Chennai operations alone have grown over 25 times and accounts for around 40% of CRISIL's global offshoring operations.[7]

Irevna claims to have pioneered the concept of "offshoring investment research" to the world's leading investment banks and financial institutions.[8]

The company has been consistently ranked the best outsourcer in its niche segment of high end financial research & analytics space.