Principally, thunderstorms throughout the world carry negative charges to the earth, which is then discharged gradually through the air in fair weather.[1]

This atmospheric circuit is central to the study of atmospheric physics and meteorology. It is used in the prediction of thunderstorms,[2] and was central to the understanding of electricity. In the past it has been suggested as a source of available energy, or communications platform. 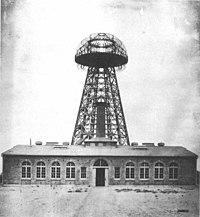 In the 18th century, scientists began understanding the link between lightning and electricity. In addition to the iconic kite experiments of Benjamin Franklin and Thomas-François Dalibard, some early studies of electric charges in a "cloudless atmosphere" were done by John Canton, Giambatista Beccaria, and John Read.[4]

In 1752, Louis-Guillaume Le Monnier observed electrification in fair weather. Various others performed measurements throughout the late 18th century, often finding consistent diurnal variations. During the 19th century, several long series of observations were made. Measurements near cities were heavily influenced by smoke pollution. In the early 20th century, balloon ascents provided information about the electric field in the upper atmosphere. Important work was done by the research vessel Carnegie, which produced standardised measurements around the world's oceans (where the air is relatively clean).

Lightning strikes the earth 40,000 times per day,[1] and can be thought to charge the earth[clarification needed] like a battery. Thunderstorms generate an electrical potential difference between the earth's surface and the ionosphere, mainly by means of lightning. Because of this, the ionosphere is positively charged relative to the earth. Consequently, there is always a small current transporting charged particles between the ionosphere and the surface.

This current is carried by a small number of ions present in the atmosphere (generated mainly by cosmic rays in the upper atmosphere, and by radioactivity near the surface). Different locations, and meteorological conditions on the earth can have different electrical conductivity. Fair weather condition describes the state of atmospheric electricity where air carries this electrical current between the earth and the ionosphere.

The voltages involved in the Earth's circuit are significant. At sea level, the typical potential gradient in fair weather is 120 V/m. Nonetheless, since the conductivity of air is limited, the associated currents are also limited. A typical value is 1800 A over the entire planet. When it is not rainy or stormy, the amount of electricity within the atmosphere[clarification needed] is typically between 1000 and 1800 amps. In fair weather conditions, there are about 3.5 microamps per square kilometer (9 microamps per square mile).[5] This can produce a 200+ volt difference between the head and feet of a regular person.

Local turbulence, winds, and other fluctuations also cause small variations in the fair weather electric field, causing the fair-weather condition to be partially regional.[3]

The Earth's electrical current varies according to a daily pattern called the Carnegie curve, believed to be caused by the regular daily variations in atmospheric electrification associated with the earth's weather regions.[6] The pattern also shows seasonal variation, linked to the earth's solstices and equinoxes. It was named after the Carnegie Institution for Science.