Short description: Material trapped inside a mineral during formation 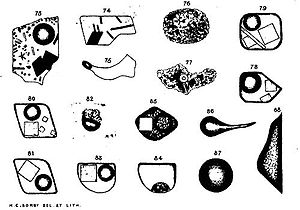 According to Hutton's law of inclusions, fragments included in a host rock are older than the host rock itself.[2][3]

Inclusions are usually other minerals or rocks, but may also be water, gas or petroleum. Liquid or vapor inclusions are known as fluid inclusions. In the case of amber it is possible to find insects and plants as inclusions.

The analysis of atmospheric gas bubbles as inclusions in ice cores is an important tool in the study of climate change.[4]

A xenolith is a pre-existing rock which has been picked up by a lava flow. Melt inclusions form when bits of melt become trapped inside crystals as they form in the melt.

An insect encased in amber, has gas bubbles protruding from its thorax and head.

The term three phase relates to the three phases of matter, solid, liquid, and gas. This is a three phase inclusion in rock crystal quartz. The solid is a black material that is of bituminous origin. The liquid encased is petroleum, and the gas bubble is methane.

Inclusions are one of the most important factors when it comes to gem valuation. In many gemstones, such as diamonds, inclusions affect the clarity of the gem, diminishing the value. In some gems, however, such as star sapphires, the inclusion actually increases the value of the gem.[5]

The term "inclusion" is also used in the context of metallurgy and metals processing.[6][7] During the melt stage of processing particles such as oxides can enter or form in the liquid metal which are subsequently trapped when the melt solidifies. The term is usually used negatively such as when the particle could act as a fatigue crack nucleator or as an area of high stress intensity.[8][9]