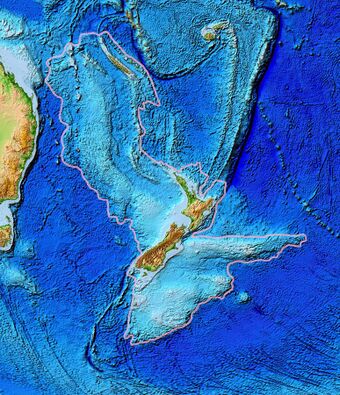 Topography of Zealandia, outlined in pink. The linear ridges running north-northeast (Colville to the west and Kermadec to the east, separated by the Havre Trough and Lau Basin) and southwest (the Resolution Ridge System) away from New Zealand are not considered part of Zealandia, nor are Australia (upper left), Vanuatu, or Fiji (top centre).[1]

Zealandia (pronounced /ziːˈlændiə/), also known as Te Riu-a-Māui (Māori)[2] or Tasmantis,[3][4] is an almost entirely submerged mass of continental crust that subsided after breaking away from Gondwanaland 83–79 million years ago.[5] It has been described variously as a submerged continent, a continental fragment (or microcontinent), and a continent.[6] The name and concept for Zealandia was proposed by Bruce Luyendyk in 1995,[7] and satellite imagery shows it to be almost the size of Australia.[8] A 2021 study suggests Zealandia is 1 billion years old, about twice as old as geologists previously thought.[9]

By approximately 23 million years ago the landmass may have been completely submerged.[10][11] Today, most of the landmass (94%) remains submerged beneath the Pacific Ocean.[12] New Zealand is the largest part of Zealandia that is above sea level, followed by New Caledonia.

With a total area of approximately 4,900,000 km2 (1,900,000 sq mi), Zealandia is substantially larger than any features termed microcontinents and continental fragments. If classified as a microcontinent, Zealandia would be the world's largest microcontinent. Its area is six times the area of Madagascar , the next-largest microcontinent in the world, and more than half the area of the Australian continent. Zealandia is more than twice the size of the largest intraoceanic large igneous province (LIP) in the world, the Ontong Java Plateau (approximately 1,900,000 km2 or 730,000 sq mi), and the world's largest island, Greenland (2,166,086 km2 or 836,330 sq mi). Zealandia is also substantially larger than the Arabian Peninsula (3,237,500 km2 or 1,250,000 sq mi), the world's largest peninsula, and the Indian subcontinent (4,300,000 km2 or 1,700,000 sq mi). Due to these and other geological considerations, such as crustal thickness and density,[13][14] some geologists from New Zealand, New Caledonia, and Australia have concluded that Zealandia fulfills all the requirements to be considered a continent rather than a microcontinent or continental fragment.[6] Geologist Nick Mortimer (in German) commented that if it was not for the ocean level, it would have been recognized as such long ago.[15]

GNS Science recognises two names for the landmass. In English, the most common name is Zealandia, a Latinate name for New Zealand; the name was coined in the mid-1990s and became established through common use. In the Māori language, the landmass is named Te Riu-a-Māui, meaning 'the hills, valleys, and plains of Māui'.[2] 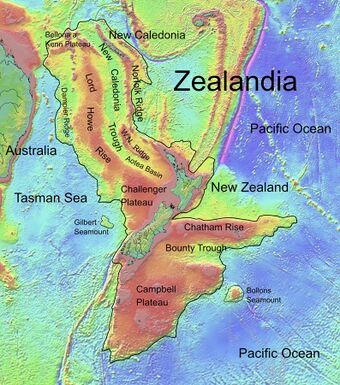 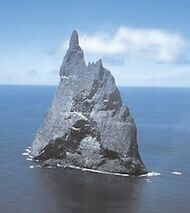 Most of Zealandia is underwater. Ball's Pyramid, near Lord Howe Island, is one place where it rises above sea level.

Zealandia is largely made up of two nearly parallel ridges, separated by a failed rift, where the rift breakup of the continent stops and becomes a filled graben. The ridges rise above the sea floor to heights of 1,000–1,500 m (3,300–4,900 ft), with a few rocky islands rising above sea level. The ridges are continental rock, but are lower in elevation than normal continents because their crust is thinner than usual, approximately 20 km (12 mi) thick, and consequently, they do not float so high above Earth's mantle as that of most landmasses.

About 25 million years ago, the southern part of Zealandia (on the Pacific Plate) began to shift relative to the northern part (on the Indo-Australian Plate). The resulting displacement by approximately 500 km (310 mi) along the Alpine Fault is evident in geological maps.[18] Movement along this plate boundary also has offset the New Caledonia Basin from its previous continuation through the Bounty Trough.

Compression across the boundary has uplifted the Southern Alps, although due to rapid erosion their height reflects only a small fraction of the uplift. Farther north, subduction of the Pacific Plate has led to extensive volcanism, including the Coromandel and Taupo Volcanic Zones. Associated rifting and subsidence has produced the Hauraki Graben and more recently, the Whakatane Graben and Wanganui Basin.

Volcanism on Zealandia has taken place repeatedly in various parts of the continental fragment before, during, and after it rifted away from the supercontinent Gondwana. Although Zealandia has shifted approximately 6,000 km (3,700 mi) to the northwest with respect to the underlying mantle from the time when it rifted from Antarctica, recurring intracontinental volcanism exhibits magma composition similar to that of volcanoes in previously adjacent parts of Antarctica and Australia.

This volcanism is widespread across Zealandia, but generally it is of low volume apart from the huge mid to late Miocene shield volcanoes that developed the Banks and Otago Peninsulas. In addition, it took place continually in numerous limited regions all through the Late Cretaceous and the Cenozoic. However, its causes remain in dispute. During the Miocene, the northern section of Zealandia (Lord Howe Rise) might have slid over a stationary hotspot, forming the Lord Howe Seamount Chain.

It has been suggested that Zealandia may have played an important part in the origin of the Pacific Ocean's volcanic Ring of Fire.[19]

Occasionally, Zealandia is divided into two regions by scientists, North Zealandia (or Western Province) and South Zealandia (or Eastern Province), the latter of which contains most of the Median Batholith crust. These two features are separated by the Alpine Fault and Kermadec Trench and by the wedge-shaped Hikurangi Plateau, and they are moving separately to each other.[13]

Classification as a continent

The case for Zealandia being a continent in its own right was argued by Nick Mortimer and Hamish Campbell in their 2014 book, entitled Zealandia: Our continent revealed,[13] citing geological and ecological evidence to support the proposal.[20]

In 2017, a team of eleven geologists from New Zealand, New Caledonia, and Australia concluded that Zealandia fulfills all the requirements to be considered a submerged continent, rather than a microcontinent or continental fragment.[6] This verdict was widely covered by news media.[21][22][23]

New Caledonia is at the northern end of the ancient continent, while New Zealand rises at the plate boundary that bisects it. These land masses constitute two outposts of the Antarctic flora, featuring araucarias and podocarps. At Curio Bay, logs of a fossilized forest closely related to modern Kauri and Norfolk pine can be seen that grew on Zealandia approximately 180 million years ago during the Jurassic period, before it split from Gondwana.[24] The trees growing in these forests were buried by volcanic mud flows and gradually replaced by silica to produce the fossils now exposed by the sea.

As sea levels drop during glacial periods, more of Zealandia becomes a terrestrial environment rather than a marine environment. Originally, it was thought that Zealandia had no native land mammal fauna, but the discovery in 2006 of a fossil mammal jaw from the Miocene in the Otago region demonstrates otherwise.[25]

The total land area (including inland water bodies) of Zealandia is 286,655 km2 (110,678 sq mi). Of this, New Zealand comprises the overwhelming majority, at 267,988 km2 (103,471 sq mi, or 93%) that includes the mainland (the North and South islands), nearby islands, and most outlying islands, including the Chatham Islands, the New Zealand Subantarctic Islands, the Solander Islands, and the Three Kings Islands (but not the Kermadec Islands or Macquarie Island (Australia ), which are part of the rift).[26]

(As of 2021) the total human population of Zealandia is approximately 5.4 million people.