Short description: Layer of rock that forms the continents and continental shelves The thickness of Earth's crust (km) 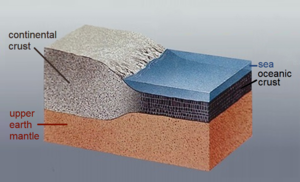 Continental and oceanic crust on the upper earth mantle

Continental crust is the layer of igneous, sedimentary, and metamorphic rocks that forms the geological continents and the areas of shallow seabed close to their shores, known as continental shelves. This layer is sometimes called sial because its bulk composition is richer in aluminium silicates and has a lower density compared to the oceanic crust, called sima which is richer in magnesium silicate minerals and is denser. Changes in seismic wave velocities have shown that at a certain depth (the Conrad discontinuity), there is a reasonably sharp contrast between the more felsic upper continental crust and the lower continental crust, which is more mafic in character.

Most continental crust is dry land above sea level. However, 94% of the Zealandia continental crust region is submerged beneath the Pacific Ocean,[5] with New Zealand constituting 93% of the above-water portion.

Because the surface of continental crust mainly lies above sea level, its existence allowed land life to evolve from marine life. Its existence also provides broad expanses of shallow water known as epeiric seas and continental shelves where complex metazoan life could become established during early Paleozoic time, in what is now called the Cambrian explosion.[6]

The height of mountain ranges is usually related to the thickness of crust. This results from the isostasy associated with orogeny (mountain formation). The crust is thickened by the compressive forces related to subduction or continental collision. The buoyancy of the crust forces it upwards, the forces of the collisional stress balanced by gravity and erosion. This forms a keel or mountain root beneath the mountain range, which is where the thickest crust is found.[13] The thinnest continental crust is found in rift zones, where the crust is thinned by detachment faulting and eventually severed, replaced by oceanic crust. The edges of continental fragments formed this way (both sides of the Atlantic Ocean, for example) are termed passive margins.

The high temperatures and pressures at depth, often combined with a long history of complex distortion, cause much of the lower continental crust to be metamorphic – the main exception to this being recent igneous intrusions. Igneous rock may also be "underplated" to the underside of the crust, i.e. adding to the crust by forming a layer immediately beneath it.

Continental crust is produced and (far less often) destroyed mostly by plate tectonic processes, especially at convergent plate boundaries. Additionally, continental crustal material is transferred to oceanic crust by sedimentation. New material can be added to the continents by the partial melting of oceanic crust at subduction zones, causing the lighter material to rise as magma, forming volcanoes. Also, material can be accreted horizontally when volcanic island arcs, seamounts or similar structures collide with the side of the continent as a result of plate tectonic movements. Continental crust is also lost through erosion and sediment subduction, tectonic erosion of forearcs, delamination, and deep subduction of continental crust in collision zones.[14] Many theories of crustal growth are controversial, including rates of crustal growth and recycling, whether the lower crust is recycled differently from the upper crust, and over how much of Earth history plate tectonics has operated and so could be the dominant mode of continental crust formation and destruction.[15]

It is a matter of debate whether the amount of continental crust has been increasing, decreasing, or remaining constant over geological time. One model indicates that at prior to 3.7 Ga ago continental crust constituted less than 10% of the present amount.[16] By 3.0 Ga ago the amount was about 25%, and following a period of rapid crustal evolution it was about 60% of the current amount by 2.6 Ga ago.[17] The growth of continental crust appears to have occurred in spurts of increased activity corresponding to five episodes of increased production through geologic time.[18]