Al-Samoud (الصمود, alternately Al-Samed, which means steadfastness in Arabic)[2] was a liquid-propellant rocket tactical ballistic missile developed by Iraq in the years between the Gulf War and the 2003 Invasion of Iraq. The Iraqi army also developed a solid-fuel rocket version known as Ababil-100.

The missile was essentially a scaled-down Scud,[3] though parts were mostly derived from the Russian SA-2 'Guideline' surface-to-air missile. The first test-firing was carried out as early as 1997[2] and was supervised by UNSCOM.[4] The production started in 2001, and the goal was the assembly of ten missiles each month. The Al Samoud 2 was not fully operational by 2003, but some of them had been already delivered to the Iraqi army.[5]

The rocket engine evolved from the SA-2 design and the thrust vector controls from the Scud. The system also included an Iraqi-designed mobile launcher similar to the Al-Nida, built for the missile Al Hussein,[6] produced by the Iraqi company Al-Fida.[7]

The missile carried a 280 kilogram warhead that was half high explosives and half protective steel shell. The explosive charge weighed 140 kg, made of a mixture of 84 kg of RDX=60%, 42 kg of TNT= 30% and 14 kg of aluminium= 10%, the latter used as an energetic blast enhancer. The payload was also designed to upload different types of bomblets.[5]

The guidance package was assembled by cannibalizing gyroscopes from the Chinese Silkworm cruise missile.[5] A source is cited as claiming that there were inertial and even GPS guidance systems illegally imported from Belarus , but these allegations have not been confirmed.[8]

Banned by the UN

Iraq agreed to destroy the Al-Samoud 2 long range missiles, and by mid-March 2003, a number had been destroyed. Although UNMOVIC ordered to stop its production, Iraq assembled some 20 missiles during the early months of 2003.[10] 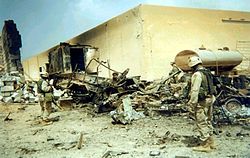 Aftermath of the Iraqi missile attack on 7 April

A number of Al-Samoud 2 missiles were fired at Kuwait during the 2003 conflict.[12] One of them, aimed at the Coalition Headquarters at Camp Doha, was successfully intercepted by a Patriot missile on March 27. Some debris hit buildings inside the US base.[13] The other missiles were also shot down or landed harmlessly in the desert.

A similar development, the Al-Fahd or Ababil-100, a solid propellant version of the Al-Samoud,[8] was also used by the Iraqi army during the invasion. The Headquarters of the 2nd Brigade, US 3rd Infantry Division, were struck south of Baghdad by a missile of this kind on April 7. Three soldiers and two foreign reporters were killed in the blast.[14][15][16][17][18][19]