Short description: Aid for drilling boreholes into the ground 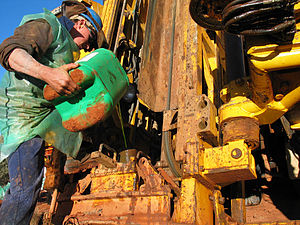 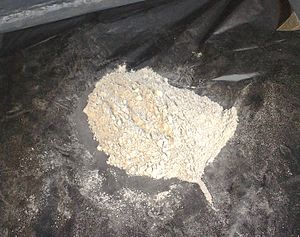 In geotechnical engineering, drilling fluid, also called drilling mud, is used to aid the drilling of boreholes into the earth. Often used while drilling oil and natural gas wells and on exploration drilling rigs, drilling fluids are also used for much simpler boreholes, such as water wells. One of the functions of drilling mud is to carry cuttings out of the hole.

The three main categories of drilling fluids are: water-based muds (WBs), which can be dispersed and non-dispersed; non-aqueous muds, usually called oil-based muds (OBs); and gaseous drilling fluid, in which a wide range of gases can be used. Along with their formatives, these are used along with appropriate polymer and clay additives for drilling various oil and gas formations.

The main functions of drilling fluids include providing hydrostatic pressure to prevent formation fluids from entering into the well bore, keeping the drill bit cool and clean during drilling, carrying out drill cuttings, and suspending the drill cuttings while drilling is paused and when the drilling assembly is brought in and out of the hole. The drilling fluid used for a particular job is selected to avoid formation damage and to limit corrosion.

Many types of drilling fluids are used on a day-to-day basis. Some wells require different types to be used at different parts in the hole, or for some types to be used in combination with others. The various types of fluid generally fall into a few broad categories:[2]

On a drilling rig, mud is pumped from the mud pits through the drill string, where it sprays out of nozzles on the drill bit, thus cleaning and cooling the drill bit in the process. The mud then carries the crushed or cut rock ("cuttings") up the annular space ("annulus") between the drill string and the sides of the hole being drilled, up through the surface casing, where it emerges back at the surface. Cuttings are then filtered out with either a shale shaker or the newer shale conveyor technology, and the mud returns to the mud pits. The mud pits let the drilled "fines" settle; the pits are also where the fluid is treated by adding chemicals and other substances. 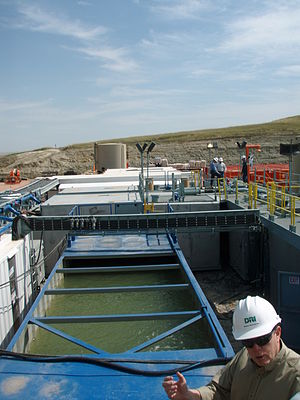 The returning mud can contain natural gases or other flammable materials which will collect in and around the shale shaker / conveyor area or in other work areas. Because of the risk of a fire or an explosion if they ignite, special monitoring sensors and explosion-proof certified equipment is commonly installed, and workers are trained in safety precautions. The mud is then pumped back down the hole and further re-circulated. After testing, the mud is treated periodically in the mud pits to ensure there are the desired properties that optimize and improve drilling efficiency, borehole stability, and other requirements, as listed below.

The main functions of a drilling mud can be summarized as follows:[1]

Drilling fluid carries the rock excavated by the drill bit up to the surface. Its ability to do so depends on cutting size, shape, and density, and speed of fluid traveling up the well (annular velocity). These considerations are analogous to the ability of a stream to carry sediment; large sand grains in a slow-moving stream settle to the stream bed, while small sand grains in a fast-moving stream are carried along with the water. The mud viscosity is another important property, as cuttings will settle to the bottom of the well if the viscosity is too low.

Cool, lubricate, and support the bit and drilling assembly 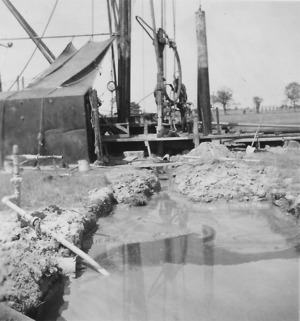 Unlined drilling fluid sumps were commonplace before the environmental consequences were recognized.

Mud is, in varying degrees, toxic. It is also difficult and expensive to dispose of it in an environmentally friendly manner. A Vanity Fair article described the conditions at Lago Agrio, a large oil field in Ecuador where drillers were effectively unregulated.[3]

Water-based drilling mud most commonly consists of bentonite clay (gel) with additives such as barium sulfate (barite), calcium carbonate (chalk) or hematite. Various thickeners are used to influence the viscosity of the fluid, e.g. xanthan gum, guar gum, glycol, carboxymethylcellulose, polyanionic cellulose (PAC), or starch. In turn, deflocculants are used to reduce viscosity of clay-based muds; anionic polyelectrolytes (e.g. acrylates, polyphosphates, lignosulfonates (Lig) or tannic acid derivates such as Quebracho) are frequently used. Red mud was the name for a Quebracho-based mixture, named after the color of the red tannic acid salts; it was commonly used in the 1940s to 1950s, then was made obsolete when lignosulfonates became available. Other components are added to provide various specific functional characteristics as listed above. Some other common additives include lubricants, shale inhibitors, fluid loss additives (to control loss of drilling fluids into permeable formations). A weighting agent such as barite is added to increase the overall density of the drilling fluid so that sufficient bottom hole pressure can be maintained thereby preventing an unwanted (and often dangerous) influx of formation fluids

They are classified based on their fluid phase, alkalinity, dispersion and the type of chemicals used.

"Mud engineer" is the name given to an oil field service company individual who is charged with maintaining a drilling fluid or completion fluid system on an oil and/or gas drilling rig.[9] This individual typically works for the company selling the chemicals for the job and is specifically trained with those products, though independent mud engineers are still common. The role of the mud engineer, or more properly drilling fluids engineer, is very critical to the entire drilling operation because even small problems with mud can stop the whole operations on rig. The internationally accepted shift pattern at off-shore drilling operations is personnel (including mud engineers) work on a 28-day shift pattern, where they work for 28 continuous days and rest the following 28 days. In Europe this is more commonly a 21-day shift pattern.

The cost of the drilling fluid is typically about 10% (may vary greatly) of the total cost of drilling a well, and demands competent mud engineers. Large cost savings result when the mud engineer and fluid performs adequately.

The mud engineer is not to be confused with mudloggers, service personnel who monitor gas from the mud and collect well bore samples.

The compliance engineer is the most common name for a relatively new position in the oil field, emerging around 2002 due to new environmental regulations on synthetic mud in the United States. Previously, synthetic mud was regulated the same as water-based mud and could be disposed of in offshore waters due to low toxicity to marine organisms. New regulations restrict the amount of synthetic oil that can be discharged. These new regulations created a significant burden in the form of tests needed to determine the "ROC" or retention on cuttings, sampling to determine the percentage of crude oil in the drilling mud, and extensive documentation. No type of oil/synthetic based mud (or drilled cuttings contaminated with OBM/SBM) may be dumped in the North Sea. Contaminated mud must either be shipped back to shore in skips or processed on the rigs.

A new monthly toxicity test is also now performed to determine sediment toxicity, using the amphipod Leptocheirus plumulosus. Various concentrations of the drilling mud are added to the environment of captive L. plumulosus to determine its effect on the animals.[10] The test is controversial for two reasons: