A fire door is a door with a fire-resistance rating (sometimes referred to as a fire protection rating for closures) used as part of a passive fire protection system to reduce the spread of fire and smoke between separate compartments of a structure and to enable safe egress from a building or structure or ship. In North American building codes, it, along with fire dampers, is often referred to as a closure, which can be derated compared against the fire separation that contains it, provided that this barrier is not a firewall or an occupancy separation. In Europe national standards for fire doors have been harmonised with the introduction of the new standard EN 16034, which refers to fire doors as fire-resisting door sets. Starting September 2016, a common CE marking procedure was available abolishing trade barriers within the European Union for these types of products. In the UK, it is Part B of the Building Regulations that sets out the minimum requirements for the fire protection that must be implemented in all dwellings this includes the use of fire doors. All fire doors must be installed with the appropriate fire resistant fittings, such as the frame and door hardware, for it to fully comply with any fire regulations.[citation needed]

In the UK the British Woodworking Federation outline the difference between a 'Fire Doorset' and a 'Fire Door Assembly'.[2]

Fire doors may be made of a combination of materials, such as:

Both the door leaf (the swinging panel of the door) and the door frame are required to meet the guidelines of the testing agency which provides the product listing. The door frame includes the fire or smoke seals, door hardware, and the structure that holds the fire door assembly in place. Together, these components form an assembly, typically called a "doorset" which holds a numerical rating, quantified in hours of resistance to a test fire. All of the components of the fire door assembly must bear a listing agencies label (with the exception of ball-bearing hinges which meet the basic build requirements of ANSI 156.2 and NFPA 80) to ensure the components have been tested to meet the fire rating requirements.

Edges of a fire door usually need to have fire rated seals which can be composed of:

When intumescent seals are used in the door design, use of the correct seal is crucial in the fire rating performance the door assembly. Seals may vary in chemical composition, expansion rate, expansion volume, and/or charring characteristics.

Some fire doors are equipped with integral windows which also have a rating, or have been incorporated at the time of the door test and be subject to the overall door's product certification. Fire-resistive windows must remain intact under fire conditions and hose stream impact resistance, and can include:

Wired glass typically withstands the fire, whereas the sodium silicate liquid also acts to insulate heat transfer, due to the endothermic action of this chemical. 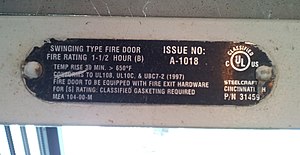 All components are required to adhere to product certification requirements that are acceptable to the local Authority Having Jurisdiction (AHJ) by meeting the requirements of the local building code and fire code. The regulatory requirement change from country to country. For example, in Australia, the National Construction Code dictates that all fire doors must be tested to certain specifications in order to meet resistance approvals and certification.[3]

In the United Kingdom a fire resisting doorset should be subjected to either a British Standard Fire Test BS 476 Part 22 1987, or a BS/EN 1634-1 2000 test. The results are recorded by the test agency and provided in a report which detail such things as constructional details, distortion data and pressure readings. The numerical fire resistance rating that is required to be installed in a particular building is provided in the Building Regulations approved Document B, or British Standards such as the BS 5588 series (e.g., 30 minutes FD30, or FD30(S) if cold smoke resistance is also required). Classifications in use which reflect the number of minutes of fire resistance offered are FD30, FD60, FD90 and FD120.[4]

Similar technical guidance documents and building regulations are in effect in other countries.

Fire doors are not necessarily noncombustible. It is acceptable for portions of the door to be destroyed by combustion during exposure to a fire as long as the door assembly meets the fire test criteria of limiting temperature on the non-fire side of the assembly. This is in accordance with the overall performance goal of a fire rated door to slow fire propagation from one fire rated compartment to another for only a limited amount of time, during which automatic or manual fire fighting may be employed to limit fire spread, or occupants can exit the building.

Fire doors are sometimes rendered unable to provide their listed fire resistance by ignorance of the intended use and associated restrictions and requirements, or by improper use. For example, fire doors are sometimes blocked open, or carpets are run through them, which would allow the fire to travel past the fire barrier in which the door is placed. The door's certification markings are displayed both on the door leaves and the fire door frames, and should not be removed or painted over during the life of the building.

Sometimes fire doors have apparently very large gaps at the foot of them, an inch or two even, allowing air movement, such as in dormitory facilities. This can lead the occupants of a building to question their status as 'real' fire doors. NFPA 80 allows a maximum door undercut of 3/4 inch however fire doors are tested with smaller clearances in accordance with NFPA 252.[5] Corridors have a fire rating of one hour or less, and the fire doors in them are required by code to have a fire rating of 1/2 or 1/3 hour, the intent of which is mainly to restrict smoke travel.[6]

Most fire doors are designed to be kept closed at all times. Some doors are designed to stay open under normal circumstances, and close automatically in the event of a fire. Whichever method is used, the door's movement should never be impaired by a doorstop or other obstacle. The intumescent and smoke-seal bounding of fire doors should be routinely checked, as should the action of the door closer and latch.

Some fire doors are held open by an electromagnet, which may be wired to a fire alarm system. If the power fails or the fire alarm is activated, the coil is de-energized, and the door closes. Wireless, battery operated fire door retainers can also be used to safely and legally hold fire doors open.

Rated fire doors are tested to withstand an ASTM E119 standard time-temperature curve for a specified period.[7] There are 20, 30, 45, 60, and 90-minute-rated fire doors that are certified by an approved laboratory designated as a Nationally Recognized Testing Laboratory (NRTL, e.g., Underwriters Laboratories). The certification only applies if all parts of the installation are correctly specified and installed. For example, fitting the wrong kind of glazing may severely reduce the door's fire resistance period.

As well as ensuring the door is hung properly and squarely, it is also very important that where a fire door is installed, any gaps left in the opening between the wall and the door frame must be properly filled with fire resisting material. Fire doors are normally installed by a carpenter.

In the United States, the NFPA requires annual inspections of fire-resistance rated door and frame assemblies.[8] Local Authorities Having Jurisdiction must adopt the new edition for this requirement to take effect. Most jurisdictions in the US will be adopting the IBC (International Building Code) model code, which references the NFPA 80 2007 edition requirement, as their local codes.

NFPA 80 5.2.4.requires the following items shall be verified, at minimum:

The final say on the acceptance of any inspection requires the approval of the AHJ (Authority Having Jurisdiction).