The sine quadrant (Arabic: Rub‘ul mujayyab, الربع المجيب) was a type of quadrant used by medieval Arabic astronomers. It is also known as a "sinecal quadrant" in the English-speaking world. The instrument could be used to measure celestial angles, to tell time, to find directions, or to determine the apparent positions of any celestial object for any time. The name is derived from the Arabic "rub‘‘‘" meaning a quarter and "mujayyab" meaning marked with sine.[1] It was described, according to King, by Muhammad ibn Mūsā al-Khwārizmī in 9th century Baghdad.[2]

Using the Sinecal Quadrant to measure the altitude of a celestial object. Note the index finger of the left hand ready to pin the cord to the quadrant as soon as the star sight is perfected. 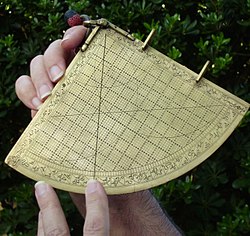 Reading the scale after taking the celestial altitude. 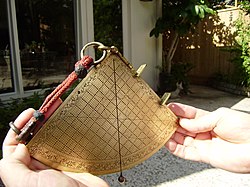 Taking the altitude of the Sun with the Sinecal Quadrant. Note shadow of sight vane with dot of sunlight on index finger of observer.

The instrument is a quarter of a circle made of wood or metal (usually brass) divided on its arc side into 90 equal parts or degrees. The 90 divisions are gathered in 18 groups of five degrees each and are generally numbered both ways from the ends of the arc. That is, one set of numbers begins at the left end of the arc and goes to 90 at the right end while the other set the zero is at the right and the 90 is at the left. This double numbering enables the instrument to measure either celestial altitude or zenith distance or both simultaneously.

At the apex where the two graduated straight sides of the grid pattern meet in a right angle there is a pin hole with a cord in it and a small weight on the free end with a small bead that slides along the cord. The cord is called “Khait” and is used as a plumb line when measuring celestial altitudes. It is also used as the indicator of angles when doing calculations with the instrument. The sliding bead facilitates trigonometric calculations with the instrument.

The reason for sixty divisions along the Jaibs and Jaib Tamams is that the instrument uses the Sexagesimal number system. That is it is graduated to the number base 60 and not to the base 10 or decimal system that we presently use. Time, angular measurement and geographical coordinate measurements are about the only hold overs from the Sumerian/Babylonian number system that are still in current use.

Like the arc, the Jaibs and Jaib tamams have their sixty divisions gathered into groups of five that are numbered in both directions to and from the apex. The double numbering of the arc means that the “Jaibs” and “Jaib tamams” labels are relative to the measurement being taken or to the calculation being performed at the time and the terms are not attached to one or the other of the graduated scales on the instrument.

Measuring a celestial altitude with the quadrant[edit]

On one of the straight edges of the non maritime quadrant (solid sheet form) there are two sighting plates which are called “Hadafatani”. Each of the alignment plates having a small, centrally placed aperture or "pinhole", the two apertures (front and back) forming the optical axis through which one sights an incline object or Sun. The light rays from the Sun passing through both apertures, the spot image of the Sun being concentric with the center of the rear plate pinhole, imaging on to a finger (project screen) if desired but not necessary or less frequent the eye at night. The hanging plum line serving two functions the first being to provide a means (indicator) to reading the angular orientation of the instrument, the second function ensuring that the instrument when optically aligned with the object of interest is situated parallel with the vertical plane (perpendicular with the ground).

It has been stated by non astronomers and non navigators, that two people are required to use the small instrument successfully; one to take the sight and one to read the cord (plum line) position on the radius segment and incorrect presumption as the instrument is to be held flush (face on) and below eye level with a single user, the two holes used for projecting the image of the Sun not direct sighting. As one can see from the photograph, it is easy to optically aligned the instrument with the Sun using simple image projection method, the device held in a single hand. At the moment of alignment, one views the face of the instrument to read the angular position of the cord relative to the radii segment of the instrument. However, it does help to have another person write down the scale readings as they are taken if a single operator is not able to do such because of environmental conditions, the single operator not having the capability to sufficiently hold the device stable, retaining the optical alignment, with just one hand.

Making altitude (elevation) measurements of the Sun being simple and direct, requiring the user to aligning the image of the Sun through the front pinhole (aperture), centered onto the rear back plate which operates more like a mask and not a viewing pass hole for sighting the Sun with the naked eye. Much in the same manner as performing eyepiece projection with a telescope, one fashioned with a front and rear aperture (font lens and rear eyepiece) along with a projection screen behind the eyepiece, or more rudimentary, the projecting of the Sun's image upon a small screen plate such as that done with a mariner's back staff. The rear, or second aperture (pass hole) having the function of working as a blacken attenuator so that any reflecting, annulus shaped sunlight off the metal aperture is not too bright, the Sun's image (light) passing through the second hole and similar in task though void of a fixed image plane, to that of an iris (diaphragm) in a camera lens to reduce the light intensity. For relative to human physiology, focusing on a bright spot of light such as a pin point image of the Sun for any extended period or repetitively over a short duration of time adversely effects momentarily, a person's visual acuity, thus making it more challenging to focus one's eyes to read the angular scale. It being typical to orientate the instrument such that the operator faces looking slightly down upon the scale, the Sun at the users left, with right hand placed in such a way that the rays of sunlight pass through the two, perforated sighting plates, forming a bright illuminated spot on the observer's finger (see photo), the finger functioning as a projection screen. At the moment an optical alignment with the Sun is established, the angular value of the device is read by the operator at the point where the graduated scale is bisected by the hanging plumb line.

These instruments, with poor angular resolution, not principally intended to function with stars at night, as an astronomical measuring device, since it is impractical to sight a star through the front pin hole (aperture) less on a fixed, stabilized mount relative to the half degree width of the very intense Sun. The maritime (navigation) version of these devices being skeletal in design rather than solid sheet form, so as to limit buffeting or displacement of the instrument while in the operators hand from wind exposure.