Short description: Boat that maneuvers other vessels by pushing or towing them 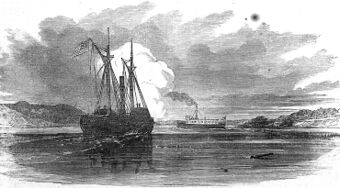 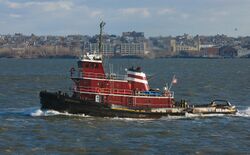 The tugboats Reid McAllister and McAllister Responder push the LPG tanker BW Volans into port at Marcus Hook on the Delaware River.

A tugboat or tug is a marine vessel that manoeuvres other vessels by pushing or pulling them, with direct contact or a tow line. These boats typically tug ships in circumstances where they can or should not move under their own power, such as in crowded harbour or narrow canals,[1] or cannot move at all, such as barges, disabled ships, log rafts, or oil platforms. Some are ocean-going, some are icebreakers or salvage tugs. Early models were powered by steam engines, long ago superseded by diesel engines. Many have deluge gun water jets, which help in firefighting, especially in harbours. 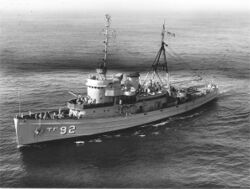 Fleet tug USS Tawasa (1,255 tons, 205 ft) which towed a nuclear depth charge as it was detonated in Operation Wigwam in 1955

Svitzer Tyr, a Danish tugboat, built in China in 2011, pictured in 2018 in Ystad harbour

Compared with seagoing tugboats, harbour tugboats that are employed exclusively as ship assist vessels are generally smaller and their width-to-length ratio is often higher, due to the need for the tugs' wheelhouse to avoid contact with the hull of a ship, which may have a pronounced rake at the bow and stern. In some ports there is a requirement for certain numbers and sizes of tugboats for port operations with gas tankers.[2] Also, in many ports, tankers are required to have tug escorts when transiting in harbors to render assistance in the event of mechanical failure. The port generally mandates a minimum horsepower or bollard pull, determined by the size of the escorted vessel. Most ports will have a number of tugs that are used for other purposes than ship assist, such as dredging operations, bunkering ships, transferring liquid products between berths, and cargo ops. These tugs may also be used for ship assist as needed. Modern ship assist tugs are "tractor tugs" that employ azimuthing stern drives (ASD), propellers that can rotate 360 degrees without a rudder, or cycloidal drives (as described below). 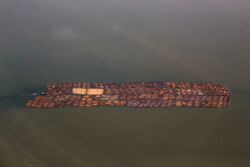 River tugs are also referred to as towboats or pushboats. Their hull designs would make open ocean operations dangerous. River tugs usually do not have any significant hawser or winch. Their hulls feature a flat front or bow to line up with the rectangular stern of the barge, often with large pushing knees.

File:Arakawa tugboat - 2019 3 25.webm The first tugboat, Charlotte Dundas, was built by William Symington in 1801. It had a steam engine and paddle wheels and was used on rivers in Scotland. Paddle tugs proliferated thereafter and were a common sight for a century. In the 1870s schooner hulls were converted to screw tugs. Compound steam engines and scotch boilers provided 300 Indicated Horse Power. Steam tugs were put to use in every harbour of the world towing and ship berthing.

Tugboat diesel engines typically produce 500 to 2,500 kW (~ 680 to 3,400 hp), but larger boats (used in deep waters) can have power ratings up to 20,000 kW (~ 27,200 hp). Tugboats usually have an extreme power:tonnage-ratio; normal cargo and passenger ships have a P:T-ratio (in kW:GRT) of 0.35 to 1.20, whereas large tugs typically are 2.20 to 4.50 and small harbour-tugs 4.0 to 9.5.[3] The engines are often the same as those used in railroad locomotives, but typically drive the propeller mechanically instead of converting the engine output to power electric motors, as is common for diesel-electric locomotives. For safety, tugboat engines often feature two of each critical part for redundancy.[4]

A tugboat is typically rated by its engine's power output and its overall bollard pull. The largest commercial harbour tugboats in the 2000s–2010s, used for towing container ships or similar, had around 60 to 65 short tons-force (530–580 kN) of bollard pull, which is described as 15 short tons-force (130 kN) above "normal" tugboats.[5][6]

Tugboats are highly manoeuvrable, and various propulsion systems have been developed to increase manoeuvrability and increase safety. The earliest tugs were fitted with paddle wheels, but these were soon replaced by propeller-driven tugs. Kort nozzles (see below) have been added to increase thrust-to-power ratio. This was followed by the nozzle-rudder, which omitted the need for a conventional rudder. The cycloidal propeller (see below) was developed prior to World War II and was occasionally used in tugs because of its maneuverability. After World War II it was also linked to safety due to the development of the Voith Water Tractor, a tugboat configuration that could not be pulled over by its tow. In the late 1950s, the Z-drive or (azimuth thruster) was developed. Although sometimes referred to as the Aquamaster or Schottel system, many brands exist: Steerprop, Wärtsilä, Berg Propulsion, etc. These propulsion systems are used on tugboats designed for tasks such as ship docking and marine construction. Conventional propeller/rudder configurations are more efficient for port-to-port towing.

The cycloidal propeller is a circular plate mounted on the underside of the hull, rotating around a vertical axis with a circular array of vertical blades (in the shape of hydrofoils) that protrude out of the bottom of the ship. Each blade can rotate itself around a vertical axis. The internal mechanism changes the angle of attack of the blades in sync with the rotation of the plate, so that each blade can provide thrust in any direction, similar to the collective pitch control and cyclic in a helicopter. 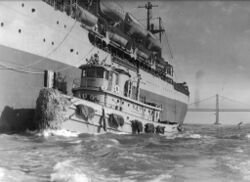 Red Cloud (foreground), a type V2-ME-A1 tug, alongside USNS David C. Shanks, at the Golden Gate at San Francisco, California, 1950s. On the bow is a tugboat fender, also call beards or bow pudding, which are rope padding to protect the bow.

Tugboat fenders are made of high-abrasion-resistance rubber with good resilience properties. They are very popular with small port craft owners and tug owners. These fenders are generally made from cut pieces of vehicle tires strung together. Often the rendering on the sides of the tug is composed of large heavy equipment or aircraft tires attached to or hung on the side of the tug. Some rendering is compression moulded in high-pressure thermic-fluid-heated moulds and have excellent seawater resistance, but are not widely used owing to the cost. Tugboat bow fenders are also called beards or bow puds. In the past they were made of rope for padding to protect the bow, but rope rendering is almost never seen in recent times. Other types of tugboat fender include Tug cylindrical fender, W fender, M fender, D fender, and others.[7]

Vintage tugboat races have been held annually in Olympia, Washington, since 1974 during the Olympia Harbor Days Maritime Festival. Tugboat races are held annually on Elliott Bay in Seattle,[10] on the Hudson River at the New York Tugboat Race,[11] the Detroit River,[12] and the Great Tugboat Race and Parade on the St. Mary's River.[13] 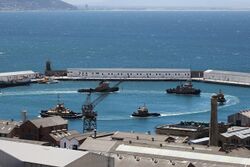 South African Naval tugs perform a "ballet" when welcoming a new member of the fleet.

Since 1980, an annual tugboat ballet has been held in Hamburg harbour on the occasion of the festival commemorating the anniversary of the establishment of a port in Hamburg. On a weekend in May, eight tugboats perform choreographed movements for about an hour to the tunes of waltz and other sorts of dance music.[14]

The Tugboat Roundup is a gathering of tugboats and other vessels in celebration of maritime industry. The Waterford Tugboat Roundup is held in the late summer at the confluence of the Hudson and Mohawk Rivers in Waterford, New York. The tugs featured are river tugs and other tugs re-purposed to serve on the New York State Canal System.[15] 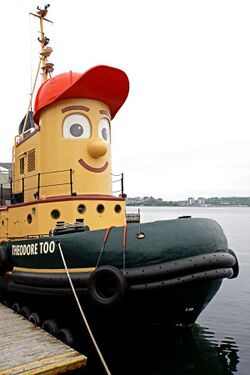 Theodore Tugboat, the titular hero of a children's show, was popular enough that a fullsize replica was constructed

To date, there have been four children's shows revolving around anthropomorphic tugboats.

"Tugger" is a tugboat in the animated series South Park. He appears in the episode "The New Terrance and Phillip Movie Trailer" as a sidekick for Russell Crowe in a fictitious television series entitled Fightin' Round The World with Russell Crowe. Tugger follows Crowe as he engages various people in physical conflicts, providing emotional support and comic relief. At one point Tugger even attempts to commit suicide, upon being forced to hear Russell Crowe's new musical composition.