In electrical engineering, particularly power engineering, voltage regulation is a measure of change in the voltage magnitude between the sending and receiving end of a component, such as a transmission or distribution line. Voltage regulation describes the ability of a system to provide near constant voltage over a wide range of load conditions. The term may refer to a passive property that results in more or less voltage drop under various load conditions, or to the active intervention with devices for the specific purpose of adjusting voltage.

In electrical power systems, voltage regulation is a dimensionless quantity defined at the receiving end of a transmission line as:

where Vnl is voltage at no load and Vfl is voltage at full load. The percent voltage regulation of an ideal transmission line, as defined by a transmission line with zero resistance and reactance, would equal zero due to Vnl equaling Vfl as a result of there being no voltage drop along the line. This is why a smaller value of Voltage Regulation is usually beneficial, indicating that the line is closer to ideal.

The Voltage Regulation formula could be visualized with the following: "Consider power being delivered to a load such that the voltage at the load is the load's rated voltage VRated, if then the load disappears, the voltage at the point of the load will rise to Vnl."

Vfull load is the voltage across the load at the receiving end when the load is connected and current flows in the transmission line. Now Vline drop = IZline is nonzero, so the voltages and the sending and receiving ends of the transmission line are not equal. The current I can be found by solving Ohm’s law using a combined line and load impedance: [math]\displaystyle{ I = \frac{V_{S}}{Z_{line} + Z_{load}} }[/math]. Then the VR, full load is given by [math]\displaystyle{ V_{S} - \frac{V_{S}Z_{line}}{Z_{line} + Z_{load}} }[/math].

Real transmission lines typically serve inductive loads, which are the motors that exist everywhere in modern electronics and machines. Transferring a large amount of reactive power Q to inductive loads makes the line current lag voltage, and the voltage regulation is characterized by decrease in voltage magnitude. In transferring a large amount of real power P to real loads, current is mostly in phase with voltage. The voltage regulation in this scenario is characterized by a decrease in phase angle rather than magnitude.

Sometimes, the term voltage regulation is used to describe processes by which the quantity VR is reduced, especially concerning special circuits and devices for this purpose (see below).

The quality of a system's voltage regulation is described by three main parameters:

Electric utilities aim to provide service to customers at a specific voltage level, for example, 220 V or 240 V. However, due to Kirchhoff's Laws, the voltage magnitude and thus the service voltage to customers will in fact vary along the length of a conductor such as a distribution feeder (see Electric power distribution). Depending on law and local practice, actual service voltage within a tolerance band such as ±5% or ±10% may be considered acceptable. In order to maintain voltage within tolerance under changing load conditions, various types of devices are traditionally employed:[3]

A new generation of devices for voltage regulation based on solid-state technology are in the early commercialization stages.[4]

Complications due to distributed generation

Distributed generation, in particular photovoltaics connected at the distribution level, presents a number of significant challenges for voltage regulation. 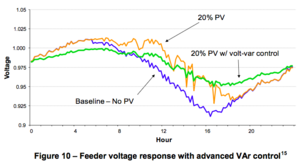 Comparison of 24-hour voltage swings on a feeder with no PV, 20% PV and 20% PV with volt-VAR control.

The voltage regulation issues caused by DG at the distribution level are complicated by lack of utility monitoring equipment along distribution feeders. The relative scarcity of information on distribution voltages and loads makes it difficult for utilities to make adjustments necessary to keep voltage levels within operating limits.[7]

Although DG poses a number of significant challenges for distribution level voltage regulation, if combined with intelligent power electronics DG can actually serve to enhance voltage regulation efforts.[8] One such example is PV connected to the grid through inverters with volt-VAR control. In a study conducted jointly by the National Renewable Energy Laboratory (NREL) and Electric Power Research Institute (EPRI), when volt-VAR control was added to a distribution feeder with 20% PV penetration, the diurnal voltage swings on the feeder were significantly reduced.[9]

One case of voltage regulation is in a transformer. The unideal components of the transformer cause a change in voltage when current flows. Under no load, when no current flows through the secondary coils, Vnl is given by the ideal model, where VS = VP*NS/NP. Looking at the equivalent circuit and neglecting the shunt components, as is a reasonable approximation, one can refer all resistance and reactance to the secondary side and clearly see that the secondary voltage at no load will indeed be given by the ideal model. In contrast, when the transformer delivers full load, a voltage drop occurs over the winding resistance, causing the terminal voltage across the load to be lower than anticipated. By the definition above, this leads to a nonzero voltage regulation which must be considered in use of the transformer.[2]