Short description: Opposition to the passage of an electric current

The resistance of an object depends in large part on the material it is made of. Objects made of electrical insulators like rubber tend to have very high resistance and low conductance, while objects made of electrical conductors like metals tend to have very low resistance and high conductance. This relationship is quantified by resistivity or conductivity. The nature of a material is not the only factor in resistance and conductance, however; it also depends on the size and shape of an object because these properties are extensive rather than intensive. For example, a wire's resistance is higher if it is long and thin, and lower if it is short and thick. All objects resist electrical current, except for superconductors, which have a resistance of zero.

For a wide variety of materials and conditions, V and I are directly proportional to each other, and therefore R and G are constants (although they will depend on the size and shape of the object, the material it is made of, and other factors like temperature or strain). This proportionality is called Ohm's law, and materials that satisfy it are called ohmic materials.

In other cases, such as a transformer, diode or battery, V and I are not directly proportional. The ratio V/I is sometimes still useful, and is referred to as a chordal resistance or static resistance,[1][2] since it corresponds to the inverse slope of a chord between the origin and an I–V curve. In other situations, the derivative [math]\displaystyle{ \frac{\mathrm{d}V}{\mathrm{d}I} }[/math] may be most useful; this is called the differential resistance. 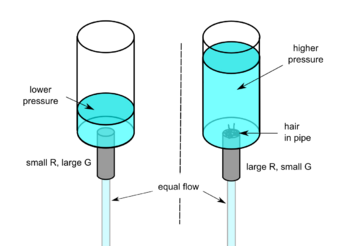 In the hydraulic analogy, current flowing through a wire (or resistor) is like water flowing through a pipe, and the voltage drop across the wire is like the pressure drop that pushes water through the pipe. Conductance is proportional to how much flow occurs for a given pressure, and resistance is proportional to how much pressure is required to achieve a given flow.

The voltage drop (i.e., difference between voltages on one side of the resistor and the other), not the voltage itself, provides the driving force pushing current through a resistor. In hydraulics, it is similar: the pressure difference between two sides of a pipe, not the pressure itself, determines the flow through it. For example, there may be a large water pressure above the pipe, which tries to push water down through the pipe. But there may be an equally large water pressure below the pipe, which tries to push water back up through the pipe. If these pressures are equal, no water flows. (In the image at right, the water pressure below the pipe is zero.)

The resistance and conductance of a wire, resistor, or other element is mostly determined by two properties:

Geometry is important because it is more difficult to push water through a long, narrow pipe than a wide, short pipe. In the same way, a long, thin copper wire has higher resistance (lower conductance) than a short, thick copper wire.

Materials are important as well. A pipe filled with hair restricts the flow of water more than a clean pipe of the same shape and size. Similarly, electrons can flow freely and easily through a copper wire, but cannot flow as easily through a steel wire of the same shape and size, and they essentially cannot flow at all through an insulator like rubber, regardless of its shape. The difference between copper, steel, and rubber is related to their microscopic structure and electron configuration, and is quantified by a property called resistivity.

In addition to geometry and material, there are various other factors that influence resistance and conductance, such as temperature; see below.

A 75 Ω resistor, as identified by its electronic color code (violet–green–black–gold–red). An ohmmeter could be used to verify this value.

Substances in which electricity can flow are called conductors. A piece of conducting material of a particular resistance meant for use in a circuit is called a resistor. Conductors are made of high-conductivity materials such as metals, in particular copper and aluminium. Resistors, on the other hand, are made of a wide variety of materials depending on factors such as the desired resistance, amount of energy that it needs to dissipate, precision, and costs.

The current–voltage characteristics of four devices: Two resistors, a diode, and a battery. The horizontal axis is voltage drop, the vertical axis is current. Ohm's law is satisfied when the graph is a straight line through the origin. Therefore, the two resistors are ohmic, but the diode and battery are not.

For many materials, the current I through the material is proportional to the voltage V applied across it: [math]\displaystyle{ I \propto V }[/math] over a wide range of voltages and currents. Therefore, the resistance and conductance of objects or electronic components made of these materials is constant. This relationship is called Ohm's law, and materials which obey it are called ohmic materials. Examples of ohmic components are wires and resistors. The current–voltage graph of an ohmic device consists of a straight line through the origin with positive slope.

Other components and materials used in electronics do not obey Ohm's law; the current is not proportional to the voltage, so the resistance varies with the voltage and current through them. These are called nonlinear or non-ohmic. Examples include diodes and fluorescent lamps. The current-voltage curve of a nonohmic device is a curved line.

Relation to resistivity and conductivity 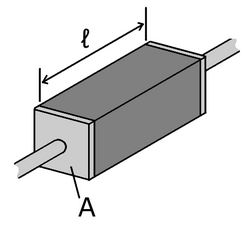 A piece of resistive material with electrical contacts on both ends.

This formula is not exact, as it assumes the current density is totally uniform in the conductor, which is not always true in practical situations. However, this formula still provides a good approximation for long thin conductors such as wires.

Another situation for which this formula is not exact is with alternating current (AC), because the skin effect inhibits current flow near the center of the conductor. For this reason, the geometrical cross-section is different from the effective cross-section in which current actually flows, so resistance is higher than expected. Similarly, if two conductors near each other carry AC current, their resistances increase due to the proximity effect. At commercial power frequency, these effects are significant for large conductors carrying large currents, such as busbars in an electrical substation,[3] or large power cables carrying more than a few hundred amperes.

The resistivity of different materials varies by an enormous amount: For example, the conductivity of teflon is about 1030 times lower than the conductivity of copper. Loosely speaking, this is because metals have large numbers of "delocalized" electrons that are not stuck in any one place, so they are free to move across large distances. In an insulator, such as Teflon, each electron is tightly bound to a single molecule so a great force is required to pull it away. Semiconductors lie between these two extremes. More details can be found in the article: Electrical resistivity and conductivity. For the case of electrolyte solutions, see the article: Conductivity (electrolytic).

Resistivity varies with temperature. In semiconductors, resistivity also changes when exposed to light. See below. 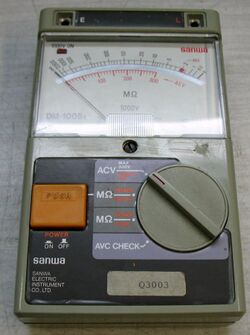 An instrument for measuring resistance is called an ohmmeter. Simple ohmmeters cannot measure low resistances accurately because the resistance of their measuring leads causes a voltage drop that interferes with the measurement, so more accurate devices use four-terminal sensing. 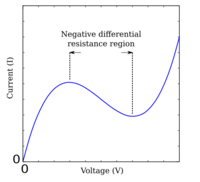 Many electrical elements, such as diodes and batteries do not satisfy Ohm's law. These are called non-ohmic or non-linear, and their current–voltage curves are not straight lines through the origin.

Resistance and conductance can still be defined for non-ohmic elements. However, unlike ohmic resistance, non-linear resistance is not constant but varies with the voltage or current through the device; i.e., its operating point. There are two types of resistance:[1][2]

Differential resistance is the derivative of the voltage with respect to the current; the slope of the current–voltage curve at a point [math]\displaystyle{ R_\mathrm{diff} = \frac { {\mathrm d}U}{ {\mathrm d}I} \,. }[/math] If the current–voltage curve is nonmonotonic (with peaks and troughs), the curve has a negative slope in some regions—so in these regions the device has negative differential resistance. Devices with negative differential resistance can amplify a signal applied to them, and are used to make amplifiers and oscillators. These include tunnel diodes, Gunn diodes, IMPATT diodes, magnetron tubes, and unijunction transistors. 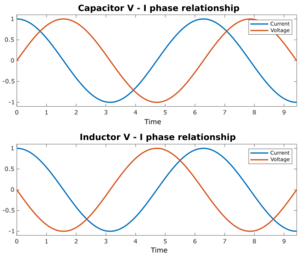 The impedance and admittance may be expressed as complex numbers that can be broken into real and imaginary parts: [math]\displaystyle{ \begin{align} Z &= R + jX \\ Y &= G + jB \end{align} }[/math]

where R is resistance, G is conductance, X is reactance, and B is susceptance. For ideal resistors, Z and Y reduce to R and G respectively. But for AC networks containing capacitors and inductors, X and B are nonzero.

A key feature of AC circuits is that the resistance and conductance can be frequency-dependent, a phenomenon known as the universal dielectric response.[7] One reason, mentioned above is the skin effect (and the related proximity effect). Another reason is that the resistivity itself may depend on frequency (see Drude model, deep-level traps, resonant frequency, Kramers–Kronig relations, etc.)

Running current through a material with resistance creates heat, in a phenomenon called Joule heating. In this picture, a cartridge heater, warmed by Joule heating, is glowing red hot.

The dissipation of electrical energy is often undesired, particularly in the case of transmission losses in power lines. High voltage transmission helps reduce the losses by reducing the current for a given power.

On the other hand, Joule heating is sometimes useful, for example in electric stoves and other electric heaters (also called resistive heaters). As another example, incandescent lamps rely on Joule heating: the filament is heated to such a high temperature that it glows "white hot" with thermal radiation (also called incandescence).

The formula for Joule heating is: [math]\displaystyle{ P=I^2R }[/math] where P is the power (energy per unit time) converted from electrical energy to thermal energy, R is the resistance, and I is the current through the resistor.

Dependence on other conditions

Resistance thermometers and thermistors are generally used in two ways. First, they can be used as thermometers: by measuring the resistance, the temperature of the environment can be inferred. Second, they can be used in conjunction with Joule heating (also called self-heating): if a large current is running through the resistor, the resistor's temperature rises and therefore its resistance changes. Therefore, these components can be used in a circuit-protection role similar to fuses, or for feedback in circuits, or for many other purposes. In general, self-heating can turn a resistor into a nonlinear and hysteretic circuit element. For more details see Thermistor.

The temperature coefficient [math]\displaystyle{ \alpha }[/math] is typically +3×10−3 K−1 to +6×10−3 K−1 for metals near room temperature. It is usually negative for semiconductors and insulators, with highly variable magnitude.[lower-alpha 4]

Some resistors, particularly those made from semiconductors, exhibit photoconductivity, meaning that their resistance changes when light is shining on them. Therefore, they are called photoresistors (or light dependent resistors). These are a common type of light detector.