Short description: Date on which a pregnant woman is estimated to give birth

Origins of the term

Confinement is a traditional term referring to the period of pregnancy when an upper-class, noble, or royal woman would withdraw from society in medieval and Tudor times and be confined to their rooms with midwives, ladies-in-waiting and female family members only to attend them.[5] This was believed to calm the mother and reduce the risk of premature delivery. "Lying-in" or bedrest is no longer a part of antenatal care.

According to American Congress of Obstetricians and Gynecologists, the main methods to calculate gestational age are:[7]

Estimation of gestational age at childbirth

Childbirth on average occurs at a gestational age of 280 days (40 weeks), which is therefore often used as a standard estimation for individual pregnancies.[6] However, alternative durations as well as more individualized methods have also been suggested. There is in any case considerable variation among individual pregnancies. 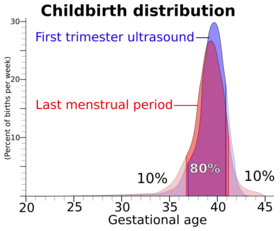 Given that these gestation lengths are only estimates of an average, it is helpful to consider gestation time as a range of dates rather than as a single "due date". The median is merely a guideline for the day at which half of all births occur earlier, and half of all births occur later. Births rarely occur on a due date, but they are clustered around due dates.[12] A study of singleton live births in the US came to the result that childbirth has a standard deviation of 14 days when gestational age is estimated by first trimester ultrasound, and 16 days when estimated directly by last menstrual period.[11]

Naegele's rule is a standard way of calculating the due date for a pregnancy when assuming a gestational age of 280 days at childbirth. The rule estimates the expected date of delivery (EDD) by adding a year, subtracting three months, and adding seven days to the origin of gestational age.[13][14] The result is approximately 280 days (40 weeks) from the start of the last menstrual period. Another method is by adding 9 months and 7 days to the first day of the last menstrual period.

Naegele's rule is named after Franz Karl Naegele, the German obstetrician who devised the rule. Naegele was born July 12, 1778, in Düsseldorf, Germany. In 1806, Naegele became ordinary professor and director of the lying-in hospital in Heidelberg. His Lehrbuch der Geburtshilfe, published in 1830 for midwives, enjoyed a successful 14 editions.

280 days past the start of the last menstrual period is found by checking the day of the week of the LMP and adjusting the calculated date to land on the same day of the week. Using the example above, 8 May 2020 is a Friday. The calculated date (15 February) is a Monday; adjusting to the closest Friday produces 12 February, which is exactly 280 days past 8 May. The calculation method does not always result in 280 days because not all calendar months are the same length; it does not account for leap years.