In economics, a cost curve is a graph of the costs of production as a function of total quantity produced. In a free market economy, productively efficient firms optimize their production process by minimizing cost consistent with each possible level of production, and the result is a cost curve. Profit-maximizing firms use cost curves to decide output quantities. There are various types of cost curves, all related to each other, including total and average cost curves; marginal ("for each additional unit") cost curves, which are equal to the differential of the total cost curves; and variable cost curves. Some are applicable to the short run, others to the long run.

There are standard acronyms for each cost concept, expressed in terms of the following descriptors:

From the various combinations we have the following short-run cost curves:

and the following long-run cost curves: 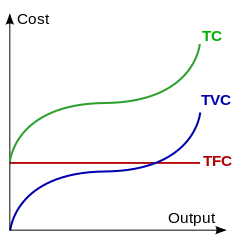 The total cost curve, if non-linear, can represent increasing and diminishing marginal returns.

With only one variable input (labor usage) in the short run, each possible quantity of output requires a specific quantity of usage of labor, and the short–run total cost as a function of the output level is this unique quantity of labor times the unit cost of labor. But in the long run, with the quantities of both labor and physical capital able to be chosen, the total cost of producing a particular output level is the result of an optimization problem: The sum of expenditures on labor (the wage rate times the chosen level of labor usage) and expenditures on capital (the unit cost of capital times the chosen level of physical capital usage) is minimized with respect to labor usage and capital usage, subject to the production function equality relating output to both input usages; then the (minimal) level of total cost is the total cost of producing the given quantity of output. 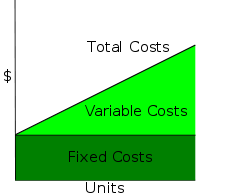 One can decompose total costs as the sum of fixed costs and variable costs. Here output is measured along the horizontal axis. In the Cost-Volume-Profit Analysis model, total costs are linear in volume. 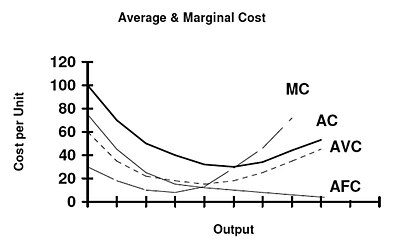 Average variable cost (AVC/SRAVC) (which is a short-run concept) is the variable cost (typically labor cost) per unit of output: SRAVC = wL / Q where w is the wage rate, L is the quantity of labor used, and Q is the quantity of output produced. The SRAVC curve plots the short-run average variable cost against the level of output and is typically drawn as U-shaped. However, whilst this is convenient for economic theory, it has been argued that it bears little relationship to the real world. Some estimates show that, at least for manufacturing, the proportion of firms reporting a U-shaped cost curve is in the range of 5 to 11 percent.[1][2]

Since fixed cost by definition does not vary with output, short-run average fixed cost (SRAFC) per unit of output is lower when output is higher, giving rise to the downward-sloped curve shown.

The average total cost curve is constructed to capture the relation between cost per unit of output and the level of output, ceteris paribus. A perfectly competitive and productively efficient firm organizes its factors of production in such a way that the usage of the factors of production is as low as possible consistent with the given level of output to be produced. In the short run, when at least one factor of production is fixed, this occurs at the output level where it has enjoyed all possible average cost gains from increasing production. This is at the minimum point in the above diagram.

Short-run total cost is given by

Within the graph above, the Average Fixed Cost curve and Average Variable Cost curve cannot start with zero, as at quantity zero these values are not defined since they would involve dividing by zero.

The long-run average cost (LRATC/LRAC) curve looks similar to the short-run curve, but it allows the usage of physical capital to vary. 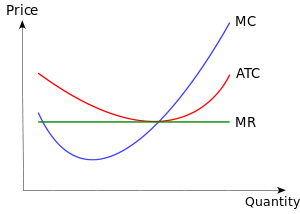 Cost curves can be combined to provide information about firms. In this diagram for example, firms are assumed to be in a perfectly competitive market. In a perfectly competitive market the price that firms are faced with in the long run would be the price at which the marginal cost curve cuts the average cost curve, since any price above or below that would result in entry to or exit from the industry, driving the market-determined price to the level that gives zero economic profit.

For each quantity of output there is one cost–minimizing level of capital and a unique short–run average cost curve associated with producing the given quantity.[11] The following statements assume that the firm is using the optimal level of capital for the quantity produced. If not, then the SRAC curve would lie "wholly above" the LRAC and would not be tangent at any point.

Both the SRAC and LRAC curves are typically expressed as U-shaped.[10]:211; 226 [15]:182;187–188 However, the shapes of the curves are not due to the same factors. For the short run curve the initial downward slope is largely due to declining average fixed costs.[4]:227 Increasing returns to the variable input at low levels of production also play a role,[18] while the upward slope is due to diminishing marginal returns to the variable input.[4]:227 With the long run curve the shape by definition reflects economies and diseconomies of scale.[15]:186 At low levels of production long run production functions generally exhibit increasing returns to scale, which, for firms that are perfect competitors in input markets, means that the long run average cost is falling;[4]:227 the upward slope of the long run average cost function at higher levels of output is due to decreasing returns to scale at those output levels.[4]:227

There is some evidence that shows that average cost curves are not typically U-shaped. In a survey by Wilford J. Eiteman and Glenn E. Guthrie in 1952 managers of 334 companies were shown a number of different cost curves, and asked to specify which one best represented the company’s cost curve. 95% of managers responding to the survey reported cost curves with constant or falling costs.[1]

Alan Blinder, former vice president of the American Economics Association, conducted the same type of survey in 1998, which involved 200 US firms in a sample that should be representative of the US economy at large. He found that about 40% of firms reported falling variable or marginal cost, and 48.4% reported constant marginal/variable cost.[19]