‹ The template Infobox event is being considered for merging. ›

Legionnaires Disease is an acute type of pneumonia that is caused by the inhalation of aerosolized water containing the Legionella bacteria.[3] Forty-two Legionella species have been classified to date, and these bacteria can grow in areas where there is warm water, such as cooling towers.[4][5] 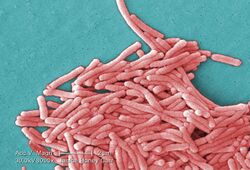 In an unrelated July and August 2015 outbreak, the disease affected at least 120 people and caused at least twelve deaths in the South Bronx area.[7] The cause of the outbreak was traced back to the Opera House Hotel on July 10, 2015, and was declared as over as of August 20. Following the Morrisania outbreak, city officials stated that they would be pursuing new regulations for cooling towers.[2][8][9][10] Affected buildings were also ordered to be decontaminated within 14 days, under the threat of misdemeanor charges.[7]

On September 21, 2015, 13 more cases of Legionnaires Disease were identified and were said to be unrelated to the outbreaks from previous months. 35 cooling towers were inspected and 15 of these tested positive for the Legionella bacteria. After the cases surfaced, city officials put legislative programs into effect that require building owners to perform quarterly inspections and to verify that the cooling towers have been tested and are free of the Legionnella bacteria.[11]