Many of today's current analytical nebulizers as of 2017

The general term nebulizer refers to an apparatus that converts liquids into a fine mist. Nozzles also convert liquids into a fine mist, but do so by pressure through small holes. Nebulizers generally use gas flows to deliver the mist. The most common form of nebulizers are medical appliances such as asthma inhalers or paint spray cans. Analytical nebulizers are a special category in that their purpose is to deliver a fine mist to spectrometric instruments for elemental analysis. They are necessary parts of inductively coupled plasma atomic emission spectroscopy (ICP-AES), inductively coupled plasma mass spectrometry (ICP-MS), and atomic absorption spectroscopy (AAS).

Analytical nebulizers are used in trace element analysis. This type of work plays an important role in areas of pharmaceutical and clinical study, biological, environmental and agricultural assessment and petroleum testing. They also have nuclear applications.

Present induction pneumatic nebulizer designs fit into 5 categories: 1. Concentric: Liquid flow surrounded by a Gas flow or Gas flow surrounded by a Liquid flow; 2. Cross Flow: Gas flow at right angles to the Liquid flow; 3. Entrained: Gas and Liquid mixed in the system and emitted as a combined flow. 4. Babington and V Groove: Liquid is spread over a surface to decrease the surface tension, and passed over a gas orifice; 5. Parallel Path: Liquid is delivered beside a gas orifice and induction pulls the liquid into the gas stream.

Newer non-induction nebulizers include 3 more categories: 6. Enhanced Parallel Path: Liquid is delivered beside a gas orifice and drawn into the gas stream by surface tension along a spout; 7: Flow Blurring: liquid is injected by pressure into a gas stream; 8. Vibrating Mesh: liquid is pushed through tiny holes by a vibrating ultrasonic plate. 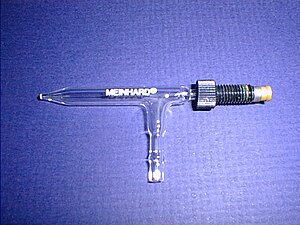 Concentric nebulizers have a central capillary with the liquid and an outer capillary with the gas. The gas draws the liquid into the gas stream through induction, and the liquid is broken into a fine mist as it moves into the gas stream. In theory, the gas and liquid may be switched with the gas in the center and the liquid in the outer capillary, but generally they work better with the gas outside and the liquid inside.[1] The first Canadian concentric patent was Canadian Patent #2405 of April 18, 1873. It was designed to deliver a better spray of oil into a burner. The design is larger but essentially the same as modern analytical nebulizers. The first one developed for spectrometers was a glass design developed by Dr. Meinhard of California in 1973.[2] His design enabled early ICP users to have a consistent sample introduction nebulizer, but it plugged easily. Today many companies produce glass concentrics, and since 1997, Teflon concentrics have become available.

There are no analytical nebulizers at present using this technique, but some oil burners do. Mainly used in much older designs as newer concentrics and cross flows are much better and easier to make.

V Groove nebulizers are similar to a cross flow in that the liquid is delivered in a capillary at right angles to the gas capillary, but the liquid is poured down a vertically orientated groove that flows past a gas orifice. The gas pulls the liquid into the gas flow and forms a fine mist. These allow for very large ID liquid capillaries, but have no suction and require a pump to feed the liquid to the device. They must be correctly orientated or they do not allow the liquid to flow past the gas stream. And their mist usually produces larger droplets than with concentrics or cross flows.

This design was developed by John Burgener of Burgener Research Inc.[4] Here, the gas stream and sample run through the nebulizer in parallel capillaries. At the tip of the nebulizer, the liquid is pulled into the gas stream by surface tension along a spout dipping into the gas stream. This allows the gas to impact the liquid, and has the liquid interact in the center of the gas flow where the gas flow speed is highest, producing a better transfer of energy from the gas to the liquid, and producing a finer droplet size. The Burgener Mira Mist nebulizers are the main products using the Enhanced Parallel Path method.

This is a new type of nebulizer which does not use induction to mix the sample and gas. Instead, pneumatic atomization is employed here, which results in the micro-mixing of fluids using a reflux cell.[5] This means that there is a turbulent mixing of the liquid and gas which results in great sensitivity and is very efficient. The OneNeb is the only example of this sort.

Since 2011, this variation on ultrasonic nebulizers has been available. There is a vibrating membrane which has micro holes in it. The sample enters through the back and is pushed through the holes as the membrane vibrates. This makes a fine mist with a droplet size proportional to the hole size. This method requires no gas flow, and is used in conjunction with a chamber. If the droplets are less than 5μm then they are too small to stick to the chamber walls and the chamber remains dry while 90–100% of the sample makes it to the torch.

The early history of medical nebulizers can be read here. The development of analytical nebulizers since the introduction of the ICP / ICP-MS is seen below:[6]

With the introduction of the ICP-MS to the laboratory, the creation of micro nebulizers became a priority in order to deliver smaller amounts of sample at lower flow rates.

1993 The Meinhard HEN (high efficiency nebulizer) was produced which handled very low flow rates but salted and plugged easily as a result. (25 times less sample than a standard Meinhard)

2010 – 2013 Meinhard and Glass Expansion: Significant improvements in attachments and designs of glass concentrics.