Babies switched at birth are babies who, because of either error or malice, are interchanged with each other at birth or very soon thereafter, leading to the babies being unknowingly raised by parents who are not their biological parents. The occurrence has historically rarely been discovered in real life, but in recent years is becoming more commonly identified due to genealogical testing of DNA, which reveals true genetic parentage. The phenomenon has been common as a plot device in novels and films, such as the TV series Switched at Birth and Autumn in My Heart.

As a literary plot device

The plot device of babies who are switched at birth, or in their cradles, has been a common one in American fiction since the 18th century. It is one of the several identifiable characteristics of melodrama that are plot devices dealing with situations that are highly improbable in real life.[1]

The use of this common theme has continued ever since. The device was used a number of times by W.S. Gilbert, including in the Gilbert and Sullivan comic operas H.M.S. Pinafore and The Gondoliers. In both cases, well-born babies were switched with commoners. Mark Twain later used this plot device in The Tragedy of Pudd'nhead Wilson (1893), where two babies, one white and one black, are switched at birth, resulting in both passing for races that they are not.[2] It is one of the themes that television films regularly exploited in the 1970s and 1980s.[3] It continues to be a popular theme in the 1990s and 21st century with (for examples) it being employed as a plot device in Veronica Mars (the characters Cindy "Mac" Mackenzie and Madison Sinclair), in Neighbours (the characters Bree Timmins and Anne Baxter), Night and Day (the characters Jane Harper and Della Wells) and in The Young and the Restless (children of Lauren Fenmore Baldwin and Sheila Carter). A non-human example occurs in the Planet of the Apes franchise, when the son of intelligent apes Zira and Cornelius is swapped with a 20th-century circus ape's infant, in order to assure the survival of the offspring that can become sentient. In Desperate Housewives, the characters Juanita Solis and Grace Sanchez were switched at birth by a nurse named Teresa Pruitt. In the Philippine television series Mara Clara, the characters Mara Davis/David and Clara del Valle were switched at birth by Gary for revenge after his former lover was married to another man. On the series Switched at Birth, the characters Bay and Daphne were switched at birth.

Baby switching storylines are a staple of daytime drama, as in the case of The Young and the Restless mentioned above. Other notable switched-at-birth storylines on American soaps include One Life to Live's story, begun in 1979, in which prostitute Katrina Karr, who had planned to put her child up for adoption as soon as it was born, and former nun Jenny Vernon both gave birth to girls at the same hospital, at the same time. Jenny's baby died in the maternity ward as Karen Wolek and Marco Dane (posing as a doctor) visited the child. As they knew Katrina had planned to give up her baby girl, Karen and Marco switched the newborns. It was not until 1982 that the truth came out and Jenny tearfully gave baby Mary back to Katrina.

In 2008, another One Life to Live storyline saw Starr Manning pregnant with Cole Thornhart's baby. Her cousin Jessica Brennan was also pregnant with her late husband's baby. Starr went into labor as her father Todd Manning (later revealed to be his twin brother Victor) planned to kidnap his grandchild and raise the baby secretly with Cole's amnesiac mother Marty Saybrooke. Tess, one of Jessica's alter personalities, had taken control of Jessica's life and went into premature labor. Starr, with the help of the baby's adoptive mother Marcie McBain and Starr's mother Blair Manning, gave birth to a healthy girl, whom she named Hope. Tess's child, named Chloe, was stillborn. The trauma of Chloe's death resulted in the emergence of another alter, Bess, who took Jessica's deceased baby to the hospital and switched her with Starr's healthy child. Seven months later, Jessica realized what had happened and told the truth to her cousin.

In George R.R. Martin's A Song of Ice and Fire series, the baby Aegon Targaryen was switched with a commoner's baby at some point prior to the Sack of King's Landing in order to save him from being killed during the rebellion against the Targaryen dynasty. After the commoner's baby is killed, everyone believes that Aegon is dead when in fact he is preparing to take back his grandfather's throne.

In the 1971 manga/anime Wandering Sun / Nozomi in the Sun (Sasurai no Taiyou), Miki and Nozomi are two girls who were switched at birth by the nurse Michiko Nohara, who holds a personal grudge against one of the families involved. Miki should've been raised as the daughter of the poor but loving Mine family but instead is taken in by the rich and snobbish Kouda clan, and Nozomi the opposite. The deceit isn't properly revealed until almost the end of the series.

In the Umineko no naku koro ni visual novels, Rudolf Ushiromiya's wife Asumu and mistress/later second wife Kyrie were pregnant and gave birth at roughly the same time. Rudolf had the children switched when Asumu's child was stillborn so the affair wouldn't be uncovered, and after Asumu's death from an illness, he married Kyrie. The surviving child grows into the protagonist of the games, Battler Ushiromiya, who believes himself to be Asumu and Rudolf's son until later in the story.

In the game Tales of the Abyss, Princess Natalia Luzu Kimlasca-Lanvaldear died few after birth so her nanny Maggie switched her with her also newborn granddaughter, Meryl Oakland. This causes Meryl's mother Sylvia (Maggie's own daughter) to commit suicide out of grief, and her father Badaq soon became the enemy general Largo the Black Lion. Meryl, now Natalia, is raised as the Princess and doesn't find out the truth until she's a teenager. 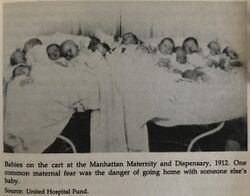 Babies on a cart at Manhattan Maternity and Dispensary in 1912

In real life, such a switch occurs rarely.[1] Since many cases of babies switched at birth are likely undocumented or unknown, the following is presumably not an exhaustive list.

Some hospitals take fingerprints, foot prints, or palm prints of newborns to prevent babies from being mixed up. Nurses also double check with the mother, checking the identity of that person as well, in order to prevent errors.[39][40] Many hospitals also have policies in which a medical record number is assigned to an infant at birth, and bands with this number as well as the last name of the mother of the infant, the sex of the infant, and the date and time of birth are placed on the infant and the mother immediately after parturition before the mother and child are separated. A band may also be placed on the father (or other person chosen by the mother) at the time of birth.