A cancer cluster is a disease cluster in which a high number of cancer cases occurs in a group of people in a particular geographic area over a limited period of time.[1]

Cancer cluster suspicions usually arise when members of the general public report that their family members, friends, neighbors, or coworkers have been diagnosed with the same or related cancers. State or local health departments will investigate the possibility of a cancer cluster when a claim is filed.[3] In order to justify investigating such claims, health departments conduct a preliminary review. Data will be collected and verified regarding: the types of cancer reported, numbers of cases, geographic area of the cases, and the patients clinical history. At this point, a committee of medical professionals will examine the data and determine whether or not an investigation (often lengthy and expensive) is justified.[4]

In the U.S., state and local health departments respond to more than 1,000 inquiries about suspected cancer clusters each year. It is possible that a suspected cancer cluster may be due to chance alone; however, only clusters that have a disease rate that is statistically significantly greater than the disease rate of the general population are investigated. Given the number of inquiries it is likely that many of these are due to chance alone. It is a well-known problem in interpreting data that random cases of cancer can appear to form clumps that are misinterpreted as a cluster.[5]

A cluster is less likely to be coincidental if the case consists of one type of cancer, a rare type of cancer, or a type of cancer that is not usually found in a certain age group. Between 5% to 15% of suspected cancer clusters are statistically significant.[3] 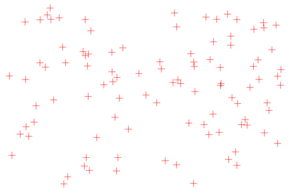 Statisticians examining data for cancer clusters must beware of random coincidences, which seem to form a pattern.[5] In this randomly generated scatter graph, arcs and patterns appear to exist that have formed only by coincidence.

Some of the larger or more well known cancer clusters include: