Aside from the physical characteristics of the eyes there is also less sensation in the eyes when stimulated.[4] The eyes also show low motor control(ataxia).[4] Along with ataxia comes a lack of coordination or ability to judge the distance of objects(dysmetria).[6] MRIs show a constant feature of rhombencephalosynapsis–a condition marked by the absence or partial absence of the cerebellar vermis and varying degrees of fusion in the cerebellum in every case of Gomez-Lopez-Hernandez syndrome.[4][7][8] Also absent are the trigeminal nerve of the trigeminal cave and the foramen rotundum, causing abnormal sensations on the forehead and the corneas.[6][8] One Gomez-Lopez-Hernandez Syndrome case in Japan also presents fever-induced seizures.[9] Others may or may not present with non-fever-induced seizures.[4] Malformations of motor centers in the brain cause reduced muscle strength(Hypotonia).[8] Eleven of fifteen people in one study showed moderate-to-severe intellectual disability.[6] In cases where it has been noted, head nodding is present.[6] Hydrocephalus and enlargement of the ventricular system is consistently present.[6] A reduced corpus callosum is present in some cases(agenesis of the corpus callosum).[6] 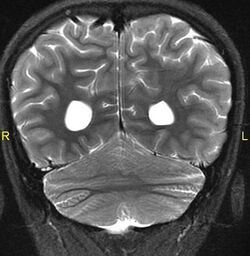 Gomez-Lopez-Hernandez Syndrome is associated with irritability, anxiety, insomnia, and self-harming behavior.[4] Developmental disabilities often present as intellectual disability with social, occupational, and learning disabilities.[4] Reduced eye sensation may cause self-harm to the eyes; one patient is on record as having put her fingers into her eyes to the point of causing additional corneal damage beyond what is normally characteristic of the syndrome.[4]

Gomez-Lopez-Hernandez Syndrome is rare and similar to other developmental disabilities. Management is similar to other developmental disabilities as there is no cure for malformations of the brain. Gomez-Lopez-Hernandez Syndrome has been diagnosed mostly in poorer countries.[4] There have been no documented attempts made to educate children with the syndrome(when intellectual disability is present) to establish a baseline of intellectual ability due to these socioeconomic problems.[4]

The oldest person who has been diagnosed with Gomez-Lopez-Hernandez Syndrome was 29 years old at the time of his assessment in 2008.[4] Most people with Gomez-Lopez-Hernandez syndrome are consistently low weight (3rd-25th percentile) and low stature due to a deficiency of growth hormone.[4] Low mobility is often an issue.[4] The cause of low mobility is thought to be neurological, therefore bone structure is not greatly affected.[4] Seizures may or may not be present and can result in injuries for those who are more mobile.[4] ADHD and bipolar disorder — which are sometimes present — can lead to dangerous behavior or outbursts.[4] While most people with Gomez-Lopez-Hernandez Syndrome show moderate intellectual disability, one case (age 14) has resulted in normal learning and social skills without intervention.[4]

Most cases have been diagnosed in Latin America with five of the thirty-four being from Brazil.[2] Two of these Brazilians are related by blood(consanguinity) suggesting the possibility of Mendelian inheritance.[2] There has been one case of a Japanese patient with Gomez-Lopez-Hernandez Syndrome so far.[9] Two Armenian cases and two from Europe have been identified, signaling that the perceived prevalence in Latin America may be short-lived as better diagnostic techniques and information about this syndrome become more widespread.[5]