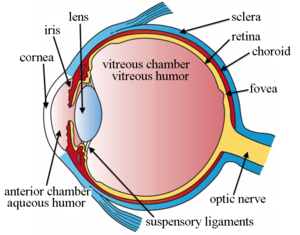 The most common reason intravitreal injections are used is to administer anti-vascular endothelial growth factor (anti-VEGF) therapies to treat wet age related macular degeneration (AMD) and diabetic retinopathy. Both of these conditions cause damage to the retina leading to vision loss. There are three widely used Anti-VEGF drugs to treat these conditions: ranibizumab (Lucentis®; Genentech), bevacizumab (Avastin®; Genentech), and aflibercept (Eylea®; Regeneron Pharmaceuticals). Bevacizumab has not been FDA approved to treat wet AMD however in the US it is the first line anti-VEGF therapy for over half of ophthalmologists due to its efficacy and drastically lower cost.[4]  These three drugs bind to VEGF molecules preventing them from binding to VEGF receptors on the surface of endothelial cells thereby stopping the abnormal angiogenesis that causes wet AMD.  All three of these therapies have vastly improved outcomes for sufferers who had limited treatment options prior to their invention but must be administered via intravitreal injection.

Endophthalmitis, or a bacterial infection within the eye causing inflammation of the sclera, is one of the most severe complications due to intravitreal injections. Incidence of endophthalmitis after intravitreal injection per patient has been reported to range from 0.019 to 1.6%.[6] Endophthalmitis can also result in white or yellow discharge inside the eyelid, and a white, cloudy cornea. A layer of white blood cells called hypopyon may develop between the iris and the cornea. Endophthalmitis is considered an ophthalmological emergency and requires immediate treatment in many cases. It is treated with injections of antibiotics and antifungal compounds as appropriate. In severe cases a vitrectomy, or removal of vitreous humor, may be required to surgically remove infectious debris.[7]

Rhegmatogenous retinal detachment, when the retina breaks allowing vitreous fluid to leak into the subretinal space, resulting from intravitreal injection is rare, occurring at most in 0.67% of people.[6] This fluid can cause sensory tissues to detach from the retina, thus losing their source of nutrition, and slowly killing the cells.[8]

At least one study has noted that up to 8.6% of intravitreal injections may be administered in the incorrect eye. Factors identified by Mimouni et al. in 2020 which may lead to a person identifying the wrong eye for self-administration include length of time since last injection and previous injections in both eyes.[9]

Treatments administered via intravitreal injection are not cures and therefore repeated injections are necessary for managing conditions. For example, anti-VEGF therapies must be injected monthly or bi-monthly for the rest of their lives in order to treat wet age related macular degeneration. A growing body of evidence has shown repeat intravitreal injections have their own increased risks and complications.

Use of a lid speculum is no longer essential. Now a lid speculum, manual lid retraction or a similar maneuver can be used to keep the eyelids out of the way during the procedure.

The strong 2004 consensus that the pupil should be routinely dilated to examine the posterior segment of the eye post injection was dropped. Some of the 2014 panelists did not dilate the pupil for routine injections while others found this examination to be highly important. As no consensus was reached this recommendation was dropped from the 2014 guidance.

The new guidelines include hand washing and glove use consistent with the modern-day medical practice of universal precautions. Although the use of gloves was agreed upon by the committee some panelists cited studies showing no impact of glove use on endophthalmitis rate.[12][15]

In 2004, the topic of droplet contamination was not addressed. Since then new evidence has come to light showing that streptococcal species cause a disproportionate number of post intravitreal injection endophthalmitis cases compared to other forms of ocular surgery.[18][19] This is likely due to aerosolized droplet contamination from either the practitioners’ or patients’ mouth.[20] The 2014 guidelines were updated to address these findings recommending both clinicians and patients wear face masks during the procedure.

The 2014 guidelines addressed bilateral injections done in the same visit. The committee recommended treating each eye as a separate procedure and use different lots or batches of medication whenever possible. The panel was not able to support the use of sterile drapes in the procedure as retrospective studies showed no increased rate of endophthalmitis in injections done without drapes.[22]

Intravitreal injections have vastly improved outcomes for patients with retinal diseases however the risk and patient burden associated with repeated injections has prompted researchers to pursue less invasive methods of application. There has been significant emphasis on finding methods to administer treatments topically over the last 50 years.[23] This research has garnered more attention thanks to the increase in intravitreal injections and the growing evidence linking repeat injections to adverse events.