Short description: Inflammation of the uvea of the eye

Uveitis (/ˌjuːvɪaɪtɪs/) is the inflammation of the uvea, the pigmented layer that lies between the inner retina and the outer fibrous layer composed of the sclera and cornea. The uvea consists of the middle layer of pigmented vascular structures of the eye and includes the iris, ciliary body, and choroid. Uveitis is described anatomically, by the part of the eye affected, as anterior, intermediate or posterior, from front to back. In the panuveitic form, all parts are involved. The most common form is the anterior one. Symptoms include pain, floaters and blurred vision, and clinical examination may show redness and an irregular pupil, while ophthalmic examination shows dilated ciliary blood vessels and the presence of cells in the anterior chamber. Uveitis may arise spontaneously and associated with some genetic factors, or be associated with a wide range of conditions including autoimmune disease and infections. While the eye is a relatively protected environment, its immune mechanisms may be overcome resulting in inflammation and tissue destruction associated with T-cell activation. The incidence is approximately 1:4500, most commonly between the ages of 20–60.

Uveitis is an ophthalmic emergency and requires a thorough examination by an ophthalmologist or optometrist, including dilation of the pupil to allow better visualisation. Urgent treatment is required to control the inflammation. Further procedures may be required to identify any underlying disease. Treatment usually involves the use of steroids, most commonly as eye drops. Any underlying disease, for instance herpes zoster (shingles) will also require treatment. While initial treatment is usually successful, complications include other ocular disorders, such as uveitic glaucoma, retinal detachment, optic nerve damage, cataracts, and in some cases, a permanent loss of vision. In the United States uveitis accounts for about 10%-20% of cases of blindness. 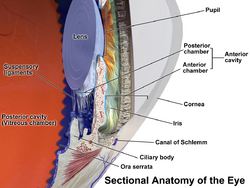 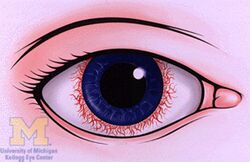 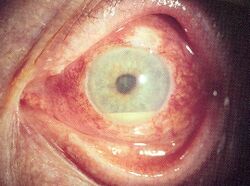 Hypopyon in anterior uveitis, seen as yellowish exudation in lower part of anterior chamber of eye

The signs and symptoms of uveitis include the following;[1]

Intermediate uveitis usually affects one eye. Less common is the presence of pain and photophobia.[3]

Inflammation in the back of the eye is commonly characterized by:

The most common form of uveitis is acute anterior uveitis (AAU). It is most commonly associated with HLA-B27, which has important features: HLA-B27 AAU can be associated with ocular inflammation alone or in association with systemic disease. HLA-B27 AAU has characteristic clinical features including male preponderance, unilateral alternating acute onset, a non-granulomatous appearance, and frequent recurrences, whereas HLA-B27 negative AAU has an equivalent male to female onset, bilateral chronic course, and more frequent granulomatous appearance.[5] Rheumatoid arthritis is not uncommon in Asian countries as a significant association of uveitis.[6]

Uveitis may be an immune response to fight an infection inside the eye. While representing the minority of patients with uveitis, such possible infections include:

Systemic disorders that can be associated with uveitis include:[8][9]

Occasionally, uveitis is not associated with a systemic condition: the inflammation is confined to the eye and has unknown cause. In some of these cases, the presentation in the eye is characteristic of a described syndrome, which are called white dot syndromes, and include the following diagnoses:

Masquerade syndromes are those conditions that include the presence of intraocular cells but are not due to immune-mediated uveitis entities. These may be divided into neoplastic and non-neoplastic conditions.

Onset of uveitis can broadly be described as a failure of the ocular immune system and the disease results from inflammation and tissue destruction. Uveitis is driven by the Th17 T cell sub-population that bear T-cell receptors specific for proteins found in the eye.[12] These are often not deleted centrally whether due to ocular antigen not being presented in the thymus (therefore not negatively selected) or a state of anergy is induced to prevent self targeting.[13][14]

Autoreactive T cells must normally be held in check by the suppressive environment produced by microglia and dendritic cells in the eye.[15] These cells produce large amounts of TGF beta and other suppressive cytokines, including IL-10, to prevent damage to the eye by reducing inflammation and causing T cells to differentiate to inducible T reg cells. Innate immune stimulation by bacteria and cellular stress is normally suppressed by myeloid suppression while inducible Treg cells prevent activation and clonal expansion of the autoreactive Th1 and Th17 cells that possess potential to cause damage to the eye.

Whether through infection or other causes, this balance can be upset and autoreactive T cells allowed to proliferate and migrate to the eye. Upon entry to the eye, these cells may be returned to an inducible Treg state by the presence of IL-10 and TGF-beta from microglia. Failure of this mechanism leads to neutrophil and other leukocyte recruitment from the peripheral blood through IL-17 secretion. Tissue destruction is mediated by non-specific macrophage activation and the resulting cytokine cascades.[16] Serum TNF-α is significantly elevated in cases while IL-6 and IL-8 are present in significantly higher quantities in the aqueous humour in patients with both quiescent and active uveitis.[17] These are inflammatory markers that non-specifically activate local macrophages causing tissue damage.

The cause of non-infectious uveitis is unknown but there are some strong genetic factors that predispose disease onset including HLA-B27[18][19] and the PTPN22 genotype.[20]

Recent evidence has pointed to reactivation of herpes simplex, varicella zoster and other viruses as important causes of developing what was previously described as idiopathic anterior uveitis.[21] Bacterial infection is another significant contributing factor in developing uveitis.[22] 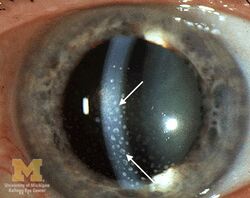 Diagnosis includes dilated fundus examination to rule out posterior uveitis, which presents with white spots across the retina along with retinitis and vasculitis.

Major histocompatibility antigen testing may be performed to investigate genetic susceptibility to uveitis. The most common antigens include HLA-B27, HLA-A29 (in birdshot chorioretinopathy) and HLA-B51 (in Behçet disease).

Uveitis is classified anatomically into anterior, intermediate, posterior, and panuveitic forms—based on the part of the eye primarily affected.[23] Prior to the twentieth century, uveitis was typically referred to in English as "ophthalmia."[24]

Uveitis is typically treated with glucocorticoid steroids, either as topical eye drops (prednisolone acetate) or as oral therapy.[25] Prior to the administration of corticosteroids, corneal ulcers must be ruled out. This is typically done using a fluorescence dye test.[26] In addition to corticosteroids, topical cycloplegics, such as atropine or homatropine, may be used. Successful treatment of active uveitis increases T-regulatory cells in the eye, which likely contributes to disease regression.[27] In severe cases an injection of posterior subtenon triamcinolone acetate may also be given to reduce the swelling of the eye. [28]

Antimetabolite medications, such as methotrexate are often used for recalcitrant or more aggressive cases of uveitis. Experimental treatments with Infliximab or other anti-TNF infusions may prove helpful.

The anti-diabetic drug metformin is reported to inhibit the process that causes the inflammation in uveitis.[29]

In the case of herpetic uveitis, anti-viral medications, such as valaciclovir or aciclovir, may be administered to treat the causative viral infection.[30]

The prognosis is generally good for those who receive prompt diagnosis and treatment, but serious complication including cataracts, uveitic glaucoma, band keratopathy, macular edema and permanent vision loss may result if left untreated. The type of uveitis, as well as its severity, duration, and responsiveness to treatment or any associated illnesses, all factor into the outlook.[1][31]

Uveitis affects approximately 1 in 4500 people and is most common between the ages 20 to 60 with men and women affected equally. In western countries, anterior uveitis accounts for between 50% and 90% of uveitis cases. In Asian countries the proportion is between 28% and 50%.[32] Uveitis is estimated to be responsible for approximately 10%-20% of the blindness in the United States.[33]