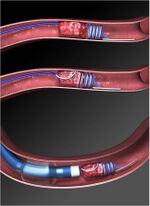 The MERCI Retriever is a medical device designed to treat Ischemic Strokes. The name is an acronym for Mechanical Embolus Removal in Cerebral Ischemia. Designed by University of California, Los Angeles in 2001, MERCI was the first device approved in the U.S. to remove blood clots in patients who had acute brain ischemia.[1]

It may result in benefit in certain people as long as 8 hours after the ischemic event.[2] In this carefully selected group it achieved 48% vessel re-canalization[2] and lower mortality rates than the use of r-tPA in revascularized patients.[2]

In an ischemic stroke, there is an obstruction within blood vessels that supply blood to the brain. The goal in treatment of such a stroke is to restore blood flow through these blood vessels. The MERCI retriever does so by allowing the removal of the blood clots causing the obstruction.

Concentric Medical undertook a preliminary study of the MERCI retriever to assess its effectiveness.[4] The manufacturers of the MERCI device filed a 510(k) premarket notification, and received an FDA premarket approval in 2004.[clarification needed]