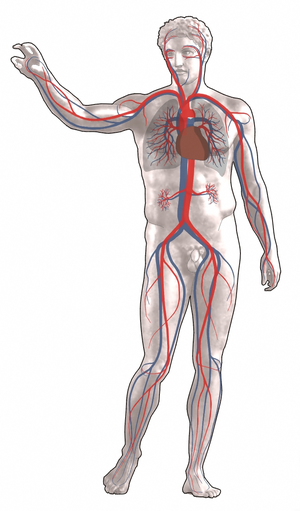 Oxygen saturation is the fraction of oxygen-saturated hemoglobin relative to total hemoglobin (unsaturated + saturated) in the blood. The human body requires and regulates a very precise and specific balance of oxygen in the blood. Normal arterial blood oxygen saturation levels in humans are 95–100 percent. If the level is below 90 percent, it is considered low and called hypoxemia.[1] Arterial blood oxygen levels below 80 percent may compromise organ function, such as the brain and heart, and should be promptly addressed. Continued low oxygen levels may lead to respiratory or cardiac arrest. Oxygen therapy may be used to assist in raising blood oxygen levels. Oxygenation occurs when oxygen molecules (O2) enter the tissues of the body. For example, blood is oxygenated in the lungs, where oxygen molecules travel from the air and into the blood. Oxygenation is commonly used to refer to medical oxygen saturation.

The body maintains a stable level of oxygen saturation for the most part by chemical processes of aerobic metabolism associated with breathing. Using the respiratory system, red blood cells, specifically the hemoglobin, gather oxygen in the lungs and distribute it to the rest of the body. The needs of the body's blood oxygen may fluctuate such as during exercise when more oxygen is required [3] or when living at higher altitudes. A blood cell is said to be "saturated" when carrying a normal amount of oxygen.[4] Both too high and too low levels can have adverse effects on the body.[5]

An SaO2 (arterial oxygen saturation, as determined by an arterial blood gas test[6]) value below 90% indicates hypoxemia (which can also be caused by anemia). Hypoxemia due to low SaO2 is indicated by cyanosis. Oxygen saturation can be measured in different tissues:[6]

Pulse oximetry is a method used to estimate the percentage of oxygen bound to hemoglobin in the blood.[8] This approximation to SaO2 is designated SpO2 (peripheral oxygen saturation). The pulse oximeter consists of a small device that clips to the body (typically a finger, an earlobe or an infant's foot) and transfers its readings to a reading meter by wire or wirelessly. The device uses light-emitting diodes in conjunction with a light-sensitive sensor to measure the absorption of red and infrared light in the extremity. The difference in absorption between oxygenated and deoxygenated hemoglobin makes the calculation possible.[6]

An SaO2 (arterial oxygen saturation) value below 90% causes hypoxia (which can also be caused by anemia). Hypoxia due to low SaO2 is indicated by cyanosis, but oxygen saturation does not directly reflect tissue oxygenation. The affinity of hemoglobin to oxygen may impair or enhance oxygen release at the tissue level. Oxygen is more readily released to the tissues (i.e., hemoglobin has a lower affinity for oxygen) when pH is decreased, body temperature is increased, arterial partial pressure of carbon dioxide (PaCO2) is increased, and 2,3-DPG levels (a byproduct of glucose metabolism also found in stored blood products) are increased. When the hemoglobin has greater affinity for oxygen, less is available to the tissues. Conditions such as increased pH, decreased temperature, decreased PaCO2, and decreased 2,3-DPG will increase oxygen binding to the hemoglobin and limit its release to the tissue.[11]