The Food and Drug Administration (FDA) of the Philippines, formerly the Bureau of Food and Drugs (BFAD /ˈbiːfæd/; 1982–2009), is a health regulatory agency under the Department of Health created on 1963 by Republic Act No. 3720, amended on 1987 by Executive Order 175 otherwise known as the “Food, Drugs and Devices, and Cosmetics Act”, and subsequently reorganized by Republic Act No. 9711 otherwise known as “The Food and Drug Administration Act of 2009”. The agency is responsible for licensing, monitoring, and regulation of cosmetics, drugs, foods, household hazardous products, medical devices[2] and electromagnetic radiation emitting devices, pesticides, tobacco and related products, and vaccines for safety, efficacy, and quality in the Philippines . 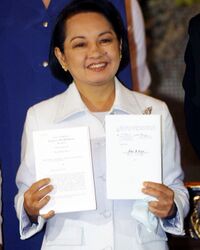 President Gloria Macapagal Arroyo shows a copy of Republic Act No. 9711 after the ceremonial signing at the Rizal Hall on Malacanang on August 18, 2009.

Department of Health (DOH) Secretary Francisco Duque Sr. created a subcommittee on Food and Drugs in 1961–62 to initiate an administration bill to Congress to enact a law that would ensure the safety, purity and quality of foods, drugs and cosmetics being made available to the public. The Subcommittee on Food and Drug was chaired by the then Undersecretary for Special Health Services, Dr. Rodolfo Caños, with members Dr. Trinidad Pesigan, Director of the Bureau of Research and Laboratories, Mr. Emilio Espinosa of the Bureau of Health Services, Ms. Amor Cita M. Pallera, Pharmacy Adviser, Office of the Secretary of Health, also as Secretary and Liaison to Congress. Thus, on June 22, 1963, Republic Act No. 3720 was passed into law known as the “Food, Drug and Cosmetic Act”.

To carry out the provisions of R.A. 3720, the Food and Drug Administration (FDA) was created with offices and laboratories constructed in the DOH San Lazaro Compound, Sta. Cruz, Manila at a cost of about Php 2.5M. The Food and Drug Administration became operational with the appointment of its first FDA Administrator, Ms. Luzonica M. Pesigan on May 25, 1966, to Dec. 7, 1977 with Mr. Emilio Espinosa as Deputy Director. By Virtue of R.A. 3720, the powers, functions and duties of the Division of Food and Drug Testing of the Bureau of Research and Laboratories and the Board of Food Inspection, all personnel together with all their equipment, supplies, records, files and balance of appropriations were transferred to the FDA.

In 1987, the Bureau moved to its new site in Alabang, Muntinlupa, and acquired new facilities including state-of-the-art analytical instruments and a modern experimental animal laboratory with the $12M grant from the Government of Japan through the Japan International Cooperation Agency (JICA). This new BFAD in Alabang became operational on April 30, 1987.

It was also on the same occasion of the inauguration of this new BFAD facility that Pres. Corazon C. Aquino declared publicly the Philippine National Drug Policy (PNDP) together with its four pillars, i.e., Quality Assurance, Rational Use of Drugs, Self-Reliance, and Tailored Procurement. Based on the issuance of E.O. Nos. 174 and 175 amendments to R.A. 5921 “The Pharmacy Law” and R.A. 3720 “Food, Drug, and Cosmetic Act” respectively, the Philippine National Drug Policy was organized. Executive Order No. 851 was superseded by E.O. No. 119 s. 1987 under Hon. Alfredo R. A. Bengzon, Sec. of Health, that again reorganized the BFAD on the basis of Administrative Order (A.O.) No. 30 s. 1987, Provisions to Implement the Reorganization of the Department of Health.

Executive Order No. 102 dated May 24, 1999 was signed and redirected the functions and operations of the Department of Health, with then Hon. Alberto G. Romualdez, Sec. of Health, wherein BFAD was expanded with an added Division, the Policy, Planning, and Advocacy Division. The joining of the National Drug Policy workforce with that of BFAD in Alabang, further strengthened the Bureau to meet new challenges in serving the interests of the Filipino people consistent with the Philippine National Drug Policy and the National Health Policy.

Republic Act No. 9711, an act strengthening and rationalizing the regulatory capacity of the Bureau of Food and Drugs by establishing adequate testing laboratories and field offices, upgrading its equipment, augmenting its human resources complement, giving authority to retain its income, renaming it the Food and Drug Administration (FDA), amending certain sections of Republic Act No. 3720, was signed by President on August 18, 2009.