The Michoud Assembly Facility (MAF) is an 832-acre (1.3 sq mi; 3.4 km2) manufacturing complex owned by NASA in New Orleans East, a district within New Orleans, Louisiana, in the United States. Organizationally it is part of NASA's Marshall Space Flight Center, and is currently a multi-tenant complex[2] to allow commercial and government contractors, as well as government agencies, to use the site.

MAF is one of the largest manufacturing plants in the world with 43 environmentally controlled acres—174,000 m2 (1,870,000 sq ft)—under one roof, and it employs more than 4,200 people.[3] From September 1961 to the end of the Apollo program in December 1972 the site was utilized by Chrysler Corporation to build the first stages of the Saturn I and Saturn IB, later joined by Boeing Corporation to build the first stage of the Saturn V rockets.[4] From September 5, 1973, to September 20, 2010, the factory was used for the construction of the Space Shuttle's external fuel tanks by Martin Marietta Corporation.[5]

In 2012, the parts of the facility dedicated to rocket construction were renamed the Chris A. Hadfield Rocket Factory (CAHRF), after the factory's former employee and Canadian astronaut Chris Hadfield.[6][7] 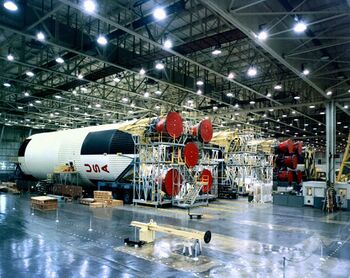 The facility was originally constructed in 1940 at the village of Michoud, Louisiana, by the Higgins-Tucker division of Higgins Industries under the direction of Andrew Jackson Higgins. Construction was done on behalf of the United States government for the war production during World War II of plywood C-76 cargo planes and landing craft. The project cost $180 million ($2.8 billion in 2018).[8] Production of the C-76 never commenced and instead produced 2 Curtiss C-46 Commando in 1943 and remaining order cancelled in 1944. The facility was referred to as Michoud (Factory) Airfield in the 1940s and briefly as a National Guard field in 1949, but became inactive by 1952.[9] During the Korean War it made engines for Sherman and Patton tanks, and boasted a 5,500-foot paved runway. It came under the management of NASA in 1961, and was used for the construction of the S-IC first stage of the Saturn V rockets and the S-IB first stage of the Saturn IB rockets built by Chrysler Corporation. It is home to the first stage of the last-constructed Saturn V, SA-515, built by The Boeing Company. The factory's ceiling height limitation - 12 meters, was unable to allow the construction of the bigger Saturn C-8 direct Moon vehicle, was one of the major reasons why the smaller C-5 (later renamed Saturn V) was chosen instead of the originally planned Moon vehicle. The runway was slowly transformed into Saturn Boulevard in the 1960s with the middle becoming a heliport and decommissioned by the 1970s.[9]

The majority of the NASA factory's history was focused on construction and production of NASA's Space Shuttle external tank (ET). Beginning with the rollout of ET-1 on June 29, 1979, which flew on STS-1, 136 tanks were produced throughout the Space Shuttle program, ending with the flight-ready tank ET-122, which flew on STS-134, rolled out on September 20, 2010.[10] A single tank produced at the facility, ET-94, was not used in spaceflight and remained at Michoud as a test article.[5][11]

Modular parts for the International Space Station were fabricated at the facility in the mid 1990s until 2010.[12] 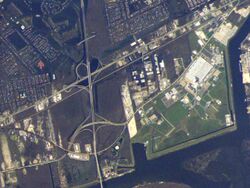 A section of eastern New Orleans after Hurricane Katrina. MAF (green) is not flooded, while the surrounding neighborhoods (dark greenish brown) are extensively flooded.

The facility did not experience significant flooding during Hurricane Katrina due to a natural ridge that runs along its northwestern boundary, the levee that makes up the southern and eastern boundaries, and the work of the pump operators who stayed to protect the facility during the storm. Several buildings sustained wind and rainwater damage. All shifts were initially canceled up to September 26, 2005, potentially setting back future Shuttle flights. All the buildings and the shuttle hardware within survived the hurricane without grave damage, but the roof of the main manufacturing building was breached and debris damaged ET-122 stored inside; that tank was refurbished and later flew on the final flight of Space Shuttle Endeavour, STS-134. Thirty-eight NASA and Lockheed Martin employees stayed behind during Hurricane Katrina to operate the pumping systems, knowing that if not activated and sustained, the facility would have been destroyed. The workers pumped more than one billion gallons (3,800,000 m3) of water out of the facility and probably were the reason that the rocket factory suffered very little damage. These employees were each awarded the NASA Exceptional Bravery Medal, NASA's highest bravery award.[13]

On September 16, 2005 NASA announced that the repairs were progressing faster than anticipated,[14] and so they would continue to use Michoud for external tank work. On October 3, 2005, the facility officially reopened for essential personnel, though some key personnel had returned earlier. On October 31 the facility reopened to all personnel.

On February 7, 2017, an EF3 tornado carved a path through Orleans Parish, in which the factory is located. Two major buildings including the main manufacturing building were damaged, with multiple broken windows. 5 people were injured, and resulting repairs and other factors contributed to the delay of the first SLS launch until early 2022.[15][16][17] 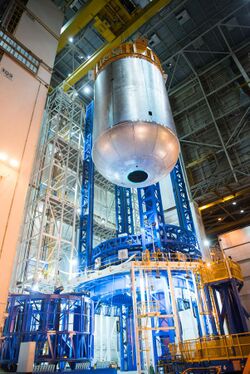 The facility consists of four large buildings in one complex:

The shipping port is located 600 meters southwest of the main manufacturing building. Transporting vehicles carrying manufactured SLS components move down Saturn Blvd, past large open fields, to the pier - where the Pegasus Barge is docked. This is where the components are shipped to either their final destination - Kennedy Space Center, or rarely back to the main Marshall Space Flight Center in Huntsville, Alabama, or the John C. Stennis Space Center in Mississippi for testing.

Other and future activities 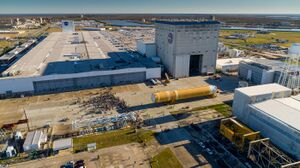 The Michoud main manufacturing building and the twin vertical assembly buildings as seen from a drone in January 2020. The Artemis 1 core stage is being rolled out, along with a crowd of workers

The Michoud Assembly Facility also houses other organizations such as the National Finance Center operated by the United States Department of Agriculture, the United States Coast Guard, GE,[25][26] Lockheed Martin and NASA. The factory is now the location for the Space Launch System (SLS) being built by the Boeing company which will be the most powerful rocket in the history of spaceflight. It will carry the Orion spacecraft during its first launch to prove capabilities.[27] (As of April 2022), the first launch is scheduled for no earlier than August 2022.[28]

The factory complex is open to the public (though through pre-booking in advance). Visitors must sign in at main reception and clear security.[29]

NASA planned to use the rocket factory to build the structure for several components of the cancelled Constellation program, including the Orion spacecraft, the Ares I Upper Stage, and the Ares V Core Stage. Under the Obama administration, the Constellation Program was cancelled in 2010,[30] but was replaced with SLS a year later to continue space exploration efforts.

NASA has an agreement in place to rent out a portion of the facility to Big Easy Studios, a New Orleans film studio.[31] This deal has been criticized by competing studios as violating NASA's rule that any deal with an outside entity must serve the agency's mission and must not compete with the private sector. NASA officials defend the agreement, stating that this helps to offset the cost of unused space on the facility and that their pricing is vetted by state and local economic development agencies to ensure it is not competing with the private market.[32] Portions of Ender's Game,[33] G.I. Joe: Retaliation,[34] and Dawn of the Planet of the Apes were filmed at the factory.

On May 24, 1988, TACA Flight 110 operated with a Boeing 737-300 jetliner made a successful emergency landing on a grassy levee in the Michoud grounds after power was lost in both engines during a severe thunderstorm. The aircraft was towed into the Michoud facility, where its engines were replaced. On 6 June, it took off, with a crew of two and minimal fuel, using the former runway at Michoud,[35] which had been reused as a road, Saturn Boulevard.[36] It was flown the short distance to New Orleans International Airport, where it was repaired.[35]