Safecast is an international, volunteer-centered organization devoted to open citizen science for the environment. Safecast was established by Sean Bonner, Pieter Franken, and Joi Ito shortly after the Fukushima Daiichi nuclear disaster in Japan, following the Tōhoku earthquake on 11 March 2011 and manages a global open data network for ionizing radiation monitoring.

The Safecast team, with help of International Medcom, Tokyo Hackerspace and other volunteers, has designed various devices for radiation mapping. These include the bGeigie and bGeigie Nano for mobile applications (carborne and walking measurements) as well as fixed stations called Pointcast. Despite being a citizen science project the methodology and toolsets safecast has develop and deployed are being used and described in the scientific literature[2].

All data are collected via the Safecast API and are presented on the publicly available interactive Safecast Tile Map. 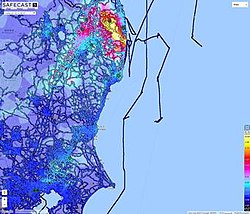 The bGeigie Nano is available as a kit, so the user needs to learn how to solder in order to build it from the supplied parts. The kit can be purchased from the Kithub product page. The device was developed in collaboration with International Medcom Inc. and shares some parts with their Inspector Alert™ detector. According to the Safecast Github page "bGeigie Nano is a lighter version of the bGeigie Mini using an Arduino Fio, a GpsBee, an OpenLog and an Inspector Alert geiger counter. The aim is to make everything fit in a Pelican Micro Case 1040". The final version of the bGeigie is placed inside the smaller Pelican Micro Case 1010. It features the LND 7317 pancake Geiger-Mueller tube type detector, a GPS receiver and is expandable with a Bluetooth module. The mode switch offers choice between geotagged radiation logging (data saved to microSD card) and measuring without GPS - showing also Bq/m2 (137Cs) values. Inside the case the unit is calibrated for gamma radiation. The main unit taken out of its case will additionally do α- and β-detection for careful use as a surface contamination spot meter.

According to the KitHub page [3] Safecast devices are also used by the following institutions: