The University of Gothenburg (Swedish: Göteborgs universitet) is a university in Sweden's second largest city, Gothenburg.

The University is the third-oldest of the current Swedish universities and with 37,000 students and 6000 staff members[3] it is one of the largest universities in the Nordic countries.

With its eight faculties and 38 departments, the University of Gothenburg is one of the most wide-ranging and versatile universities in Sweden. Its eight faculties offer training in the Creative Arts, Social Sciences, Natural Sciences, Humanities, Education, Information Technology, Business, Economics and Law, and Health Sciences.

The University of Gothenburg has the highest number of applicants per study place in many of its subjects and courses, making it one of the most popular universities in Sweden. 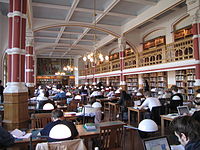 The University of Gothenburg was founded as Göteborgs högskola (Gothenburg University College) in 1891. In 1907 it was granted the same status as Uppsala University and Lund University by the Swedish government, thus creating Sweden's third university.

Over the course of time, it has merged with a number of previously independent higher education institutions in the city and has continuously expanded its study profile. It was granted the rights of a full university by the Swedish Government in 1954, following the merger of the Göteborgs högskola (Gothenburg College) with the Medicinhögskolan i Göteborg (Gothenburg Medical School).[4]

In 1971, the originally separate Gothenburg School of Economics and Commercial Law became part of the University of Gothenburg.

Sahlgrenska University Hospital is associated with the university as a teaching hospital. The Sahlgrenska Hospital was founded in 1772 following a donation by Niclas Sahlgren, and is the largest in Northern Europe.

In the 1990s the School of Economics and the Academy of Music, Drama and Opera have moved to new buildings in the city centre. A new campus for the Faculty of Education (teacher training) was opened in central Gothenburg in 2006.

The University of Gothenburg is a pronounced city university, that is most of its facilities are within the city centre of Gothenburg. The main building as well as most faculties are located in the central part of Gothenburg.

Gothenburg has a great academic excellence, originating from the University of Gothenburg, Chalmers University of Technology and the Sahlgrenska University Hospital, to face these challenges. It has a strong tradition of innovation, resulting in for example Losec, the Brånemark implant, drugs against Parkinson’s and most recently, the first ever completed pregnancy from a transplanted uterus. Together with Uppsala, Lund, and Stockholm universities, it is one of four large international research universities in Sweden.

The entrance (left) to and the auditorium (right) of the main administrative building of the university.

The University of Gothenburg is one of Sweden’s largest universities. It is a comprehensive university, organised into eight faculties and 38 departments. The University is a public authority as well as a confederation of Faculty Boards. Each faculty/school has significant autonomy based on its attributed powers, and a distinct identity within the University.

The University Board is the University’s highest decision-making body.[5] The board consists of 15 members and has "supervision over all the University’s affairs, and is responsible that its duties are fulfilled". The Swedish Government appoints seven of the members externally, based on their having experience in activities that have significance for the university’s teaching and research functions. In addition, the Vice-Chancellor, three faculty members and three students, as well as union representatives are included as ordinary members.

The day-to-day management is headed by the Vice-Chancellor, who is responsible for implementing the decisions of the board.[6] She is supported by the central administration. 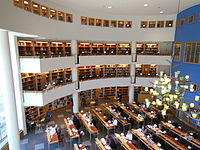 Modern architecture: Sahlgrenska Academy (left) and the reading hall of the School of Business and Law (right).

The Faculty of Arts

University of Gothenburg places well in local and global rankings and is usually positioned among the world's best for life sciences and medicine. It was ranked 2nd in Sweden, 11th in Europe and 40th in the world in the subjects of biological and life sciences by AWRU-Shanghai 2018 world ranking. In dentistry and clinical medicine it was ranked 21st and 33rd respectively by the AWRU-Shanghai 2018 world ranking.[9][10]

Artisten – Academy of Music and Drama

Lotta Lotass, writer and member of the Swedish Academy.

The University of Gothenburg has awarded numerous honorary doctorates to public figures and excellent academics, including: