Pattern Blocks are a set of mathematical manipulatives developed in the 1960s. The six shapes are both a play resource and a tool for learning in mathematics, which serve to develop spatial reasoning skills that are fundamental to the learning of mathematics. Among other things, they allow children to see how shapes can be composed and decomposed into other shapes, and introduce children to ideas of tilings. Pattern blocks sets are multiple copies of just six shapes:

The blocks were designed with their possibilities for both mathematics and play in mind. The advice given in the 1968 EDC Teacher's Guide is: "Take out the blocks, and play with them yourself. Try out some of your own ideas. Then, when you give the blocks to the children, sit back and watch what they do."[1] The blocks are sufficiently mathematically structured that children’s self-directed play can lead to a variety of mathematical experience.[2] Christopher Danielson identifies a number of frequent features of play which occur:[3] 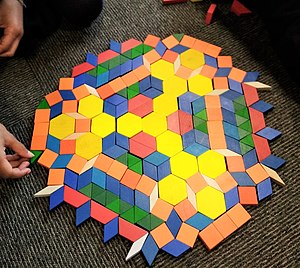 The EDC Teacher's Guide continues: "Many children start by making abstract designs — both symmetrical and asymmetrical. As play continues these designs may become more and more elegant and complex, or they become simple as the child refines his ideas."

An example of their use is given by Meha Agrawal: "Starting from the center, I would add tier after tier of blocks to build my pattern — it was an iterative process, because if something didn't look aesthetically appealing or fit correctly, it would require peeling off a layer and reevaluating ways to fix it. The best part was the gratification I received when my creation was complete. Though individually boring, collectively these blocks produced an intricate masterpiece that brought art and math, big-picture and detail, simplicity and complexity closer together".[4]

Pattern blocks were developed, along with a Teacher's Guide to their use,[1] at the Education Development Center in Newton, Massachusetts as part of the Elementary Science Study (ESS) project.[5] The first Trial Edition of the Teacher's Guide states: "Work on Pattern Blocks was begun by Edward Prenowitz in 1963. He developed most of the ideas for the blocks and their uses and arranged for the first classroom trials. Many ESS staff members tried the materials and suggested additional activities."[6] When Marion Walter, who was also part of the project in the 1960s spoke to Prenowitz in 1996, he said that he considered the allocation of one color to all blocks of a particular shape, much like Cuisenaire rods, which may have given him the idea, to be one of the innovative features of the blocks. Also important in his choice was that there was a small number of blocks, that also combined in particular ways.[6]

A number of compatible shapes that extend pattern blocks are commercially available. Two sets of "Fractional Pattern Blocks" exist: both with two blocks.[7] The first has a pink double hexagon and a black chevron equivalent to four triangles. The second has a brown half-trapezoid and a pink half-triangle. Another set, Deci-Blocks, is made up of six shapes, equivalent to four, five, seven, eight, nine and ten triangles respectively.