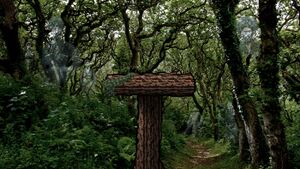 An artistic depiction of the Circassian Hammer-cross, a symbol of Habze.

The belief system takes its name from the Circassian epic Nart Saga, originally orally transmitted, which has heavily contributed to the shaping of Circassian values over the centuries. Although historically Christianised and Islamised, the period of the Soviet Union contributed to a severe weakening of religions in the area, especially among the Circassians. During this time and after the fall of the Soviet regime, the revival of Habzist worldview was supported by Circassian intellectuals, as part of a rise in nationalism and cultural identity in the 1990s[3] and, more recently as a thwarting force against Wahhabism and other Islamic fundamentalism.[4]

The movement has developed a following especially in Karachay-Cherkessia (12%) and Kabardino-Balkaria (3%), according to the 2012 Sreda Atlas statistics.[5] Practitioners and advocates have faced radical Islamist persecution.

On 29 December 2010, a prominent Kabard-Circassian ethnographer and Habze advocate, Arsen Tsipinov,[6] was murdered by Islamists who had accused him of mushrik (idolatrous disbelief in Islamic monotheism) and months earlier threatened him and others they accused as idolaters and munafiqun ("hypocrites" who are said are outwardly Muslims but secretly unsympathetic to the cause of Islam) to stop "reviving" and diffusing the rituals of the original Circassian pre-Islamic faith.[7][8]

On 11 May 2018, a book about Habze (with focus on the code of conduct, code of honour, and traditions of the Circassian people) entitled الاديغة هابزة-العادات الشركسية or Адыгэ хабзэ (in Circassian) was released. It was written by Circassian language expert Zarema Madin Gutchetl and translated by Nancy Hatkh.[9]

"Habze" (Хабзэ) is a Circassian compound made up from хы "khy", meaning "vast" or "universe", and бзэ "bze", meaning "speech", "word", "language".[10] Thus, its meaning is roughly "language of the universe" or "word of the cosmos", comparable to the concept of Dharma.

An important element is the belief in the soul (psa) of the ancestors, who have the ability to observe and evaluate the affairs of their offspring.[2] The concept of physical pain or pleasure in the Hereafter (Hedryhe) is absent: the soul is granted spiritual satisfaction or remorse for one's chosen path in life in front of himself and his ancestors.[2]

Therefore, the goal of man's earthly existence is the perfection of the soul, which corresponds to the maintenance of honour (nape), manifestation of compassion (guschlegu), gratuitous help (psape), which, along with valour, and bravery of a warrior, enables the human soul to join the soul of the ancestors with a clear conscience (nape huzhkle).[2] The souls of the ancestors require commemoration: funeral feasts are arranged (hedeus) and sacrifice or memorial meal preparations (zheryme) are practiced and distributed for the remembrance of the dead souls.[2]

A wheel, representing the articulation of the universe from the center, Tha.

The Habzist theology is monistic, with utmost prominence given to the god Tha (Тхьэ, tħa), Thashkhue (Тхьэшхуэ, tħaʃxʷa, also known as Theshxwe) or Thashkho (Тхьашхо), who begets the universe.[2] First of all, Tha expresses himself generating the Word or cosmic Law (Khy), the primordial pattern from which all the beings form naturally, developing by internal laws.[2] Enlightenment for men corresponds to an understanding of Tha's Law.[2] − Thashkhue is omnipresent in his creation (coagulation); according to Adyghe cosmological texts, "his spirit is scattered throughout space".[2] In Adyghe hymns Tha (Thashxue) is referred to as "the One everyone asks, but who doesn't ask back", "the multiplier of the non-existent", "on whom everyone places their hope, but who doesn’t place hope on anyone", "from whom the gifts come", "His amazing work", "the One who permits heaven and earth to move".[2]

Everything is One (Псори Зыщ, Psora Zysch, or Псори Хыщ, Psora Hysch), and is one with the Tha.[10] The material-manifested world is in perpetual change, but at the same time there is a foundation that always remains unshaken. That is the originating principle of the world and its Law.[10] The always-changing world and its basis is compared to a rotating wheel (дунейр шэрхъщи duneyr sherhschi, мэкlэрахъуэ meklerahue): although the wheel is constantly rotating (changing), it has its central hub around which it revolves, which remains still.[10]