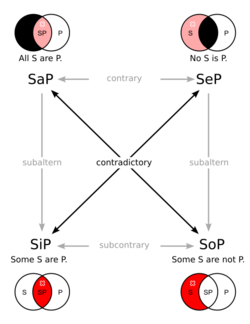 Square of opposition
In the Venn diagrams black areas are empty and red areas are nonempty.
The faded arrows and faded red areas apply in traditional logic.

Boolean logic is a system of syllogistic logic invented by 19th-century British mathematician George Boole, which attempts to incorporate the "empty set", that is, a class of non-existent entities, such as round squares, without resorting to uncertain truth values.

Thus, the subaltern relationship between universal and existential also does not hold, since for a nonexistent S, "All S is P" is true but does not entail "Some S is P", which is false. Of the Aristotelian square of opposition, only the contradictory relationships remain intact.