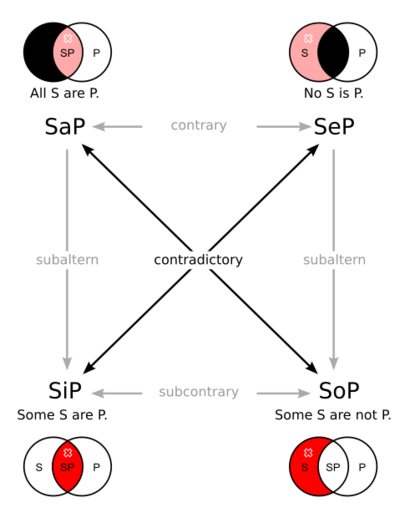 * Square of opposition. * The lower case letters (a, e, i, o) are used instead of the upper case letters (A, E, I, O) here in order to be visually distinguished from the surrounding upper case letters S (Subject term) and P (Predicate term). * In the Venn diagrams, black areas are empty and red areas are nonempty. White areas may or may not be empty. * The faded arrows and faded red areas apply in traditional logic assuming the existence of things stated as S (or things satisfying a statement S in modern logic). In modern logic, this is not assumed so the faded ones do not hold. (There can be no element in the faded red areas in the modern logic.) 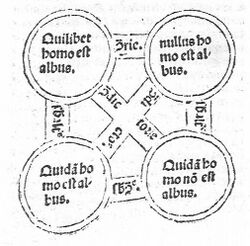 Depiction from the 15th century

In term logic (a branch of philosophical logic), the square of opposition is a diagram representing the relations between the four basic categorical propositions. The origin of the square can be traced back to Aristotle's tractate On Interpretation and its distinction between two oppositions: contradiction and contrariety. However, Aristotle did not draw any diagram. This was done several centuries later by Apuleius and Boethius.

In traditional logic, a proposition (Latin: propositio) is a spoken assertion (oratio enunciativa), not the meaning of an assertion, as in modern philosophy of language and logic. A categorical proposition is a simple proposition containing two terms, subject (S) and predicate (P), in which the predicate is either asserted or denied of the subject.

*Proposition 'A' may be stated as "All S is P." However, Proposition 'E' when stated correspondingly as "All S is not P." is ambiguous[2] because it can be either an E or O proposition, thus requiring a context to determine the form; the standard form "No S is P" is unambiguous, so it is preferred. Proposition 'O' also takes the forms "Sometimes S is not P." and "A certain S is not P." (literally the Latin 'Quoddam S nōn est P.')

Aristotle states (in chapters six and seven of the Peri hermēneias (Περὶ Ἑρμηνείας, Latin De Interpretatione, English 'On Interpretation')), that there are certain logical relationships between these four kinds of proposition. He says that to every affirmation there corresponds exactly one negation, and that every affirmation and its negation are 'opposed' such that always one of them must be true, and the other false. A pair of an affirmative statement and its negation is, he calls, a 'contradiction' (in medieval Latin, contradictio). Examples of contradictories are 'every man is white' and 'not every man is white' (also read as 'some men are not white'), 'no man is white' and 'some man is white'.

The below relations, contrary, subcontrary, subalternation, and superalternation, do hold based on the traditional logic assumption that things stated as S (or things satisfying a statement S in modern logic) exist. If this assumption is taken out, then these relations do not hold.

'Contrary' (medieval: contrariae) statements, are such that both statements cannot be true at the same time. Examples of these are the universal affirmative 'every man is white', and the universal negative 'no man is white'. These cannot be true at the same time. However, these are not contradictories because both of them may be false. For example, it is false that every man is white, since some men are not white. Yet it is also false that no man is white, since there are some white men.

These relationships became the basis of a diagram originating with Boethius and used by medieval logicians to classify the logical relationships. The propositions are placed in the four corners of a square, and the relations represented as lines drawn between them, whence the name 'The Square of Opposition'. Therefore, the following cases can be made:[6]

To memorize them, the medievals invented the following Latin rhyme:[7]

It affirms that A and E are not neither both true nor both false in each of the above cases. The same applies to I and O. While the first two are universal statements, the couple I / O refers to particular ones.

The problem of existential import

Subcontraries (I and O), which medieval logicians represented in the form 'quoddam A est B' (some particular A is B) and 'quoddam A non est B' (some particular A is not B) cannot both be false, since their universal contradictory statements (no A is B / every A is B) cannot both be true. This leads to a difficulty firstly identified by Peter Abelard (1079 – 21 April 1142). 'Some A is B' seems to imply 'something is A', in other words, there exists something that is A. For example, 'Some man is white' seems to imply that at least one thing that exists is a man, namely the man who has to be white, if 'some man is white' is true. But, 'some man is not white' also implies that something as a man exists, namely the man who is not white, if the statement 'some man is not white' is true. But Aristotelian logic requires that one of these statements (more generally 'some particular A is B' and 'some particular A is not B') is necessarily true, i.e., they cannot both be false. Therefore, since both statements imply the presence of at least one thing that is a man, the presence of a man or men is followed. But, as Abelard points out in the Dialectica, surely men might not exist?[8]

For with absolutely no man existing, neither the proposition 'every man is a man' is true nor 'some man is not a man'.[9]

Abelard also points out that subcontraries containing subject terms denoting nothing, such as 'a man who is a stone', are both false.

If 'every stone-man is a stone' is true, also its conversion per accidens is true ('some stones are stone-men'). But no stone is a stone-man, because neither this man nor that man etc. is a stone. But also this 'a certain stone-man is not a stone' is false by necessity, since it is impossible to suppose it is true.[10]

Affirmatives have existential import, and negatives do not. The ancients thus did not see the incoherence of the square as formulated by Aristotle because there was no incoherence to see.[11]

And points to Boethius' translation of Aristotle's work as giving rise to the mistaken notion that the O form has existential import.

But when Boethius (477 – 524 AD) comments on this text he illustrates Aristotle's doctrine with the now-famous diagram, and he uses the wording 'Some man is not just'. So this must have seemed to him to be a natural equivalent in Latin. It looks odd to us in English, but he wasn't bothered by it.[13] 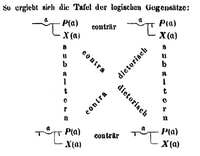 Frege's square of opposition
The conträr below is an erratum:
It should read subconträr

In the 19th century, George Boole (November 1815 – 8 December 1864) argued for requiring existential import on both terms in particular claims (I and O), but allowing all terms of universal claims (A and E) to lack existential import. This decision made Venn diagrams particularly easy to use for term logic. The square of opposition, under this Boolean set of assumptions, is often called the modern Square of opposition. In the modern square of opposition, A and O claims are contradictories, as are E and I, but all other forms of opposition cease to hold; there are no contraries, subcontraries, subalternations, and superalternations. Thus, from a modern point of view, it often makes sense to talk about 'the' opposition of a claim, rather than insisting, as older logicians did, that a claim has several different opposites, which are in different kinds of opposition with the claim.

The traditional square of opposition is now often compared with squares based on inner- and outer-negation.[14]

Logical hexagons and other bi-simplexes

The square of opposition has been extended to a logical hexagon which includes the relationships of six statements. It was discovered independently by both Augustin Sesmat (April 7, 1885 – December 12, 1957) and Robert Blanché (1898–1975).[15] It has been proven that both the square and the hexagon, followed by a "logical cube", belong to a regular series of n-dimensional objects called "logical bi-simplexes of dimension n." The pattern also goes even beyond this.[16]

Square of opposition (or logical square) and modal logic

The logical square, also called square of opposition or square of Apuleius has its origin in the four marked sentences to be employed in syllogistic reasoning: “Every man is bad,” the universal affirmative - The negation of the universal affirmative “Not every man is bad” (or “Some men are not bad”) - “Some men are bad,” the particular affirmative - and finally, the negation of the particular affirmative “No man is bad”. Robert Blanché published with Vrin his Structures intellectuelles in 1966 and since then many scholars think that the logical square or square of opposition representing four values should be replaced by the logical hexagon which by representing six values is a more potent figure because it has the power to explain more things about logic and natural language.

By definition, the empty set [math]\displaystyle{ \empty }[/math] is a subset of all sets. From this fact it follows that, according to this mathematical convention, if there are no A's, then the statements "All A is B" and "No A is B" are always true whereas the statements "Some A is B" and "Some A is not B" are always false. This also implies that AaB does not entail AiB, and some of the syllogisms mentioned above are not valid when there are no A's ([math]\displaystyle{ s(A) = \empty }[/math]).