Short description: Commitment or obligation to someone or something or to perform an action on the behalf of 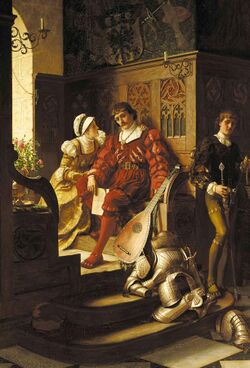 A duty (from "due" meaning "that which is owing"; Old French: deu, did, past participle of devoir; Latin: debere, debitum, whence "debt") is a commitment or expectation to perform some action in general or if certain circumstances arise. A duty may arise from a system of ethics or morality, especially in an honor culture. Many duties are created by law, sometimes including a codified punishment or liability for non-performance. Performing one's duty may require some sacrifice of self-interest.

Cicero, an early Roman philosopher who discusses duty in his work “On Duty", suggests that duties can come from four different sources:[1]

The specific duties imposed by law or culture vary considerably, depending on jurisdiction, religion, and social normalities.

Duty[2] is also often perceived as something owed to one's country (patriotism), or to one's homeland or community. Civic duties could include:

Specific obligations arise in the services performed by a minister of a church, by a soldier, or by any employee or servant.[3]

Examples of legal duties include:

Lady Feng and the Bear

In most cultures, children are expected to take on duties in relation to their families. This may take the form of behaving in such a way that upholds the family's honor in the eyes of the community, entering into arranged marriages that benefit the family's status, or caring for ailing relatives. This family-oriented sense of duty is a particularly central aspect to the teachings of Confucius, and is known as xiao, or filial piety. As such, the duties of filial piety have played an enormous role in the lives of people in eastern Asia for centuries. For example, the painting Lady Feng and the Bear, from ancient China, depicts the heroic act of a consort of the emperor placing herself between her husband and a rampaging bear. This is meant to be taken as an example of admirable filial behavior. Filial piety is considered so important that in some cases, it outweighs other cardinal virtues: In a more modern example, "concerns with filial piety of the same general sort that motivate women to engage in factory work in Korea, Japan, Taiwan, Malaysia, Singapore, Indonesia, and elsewhere in Asia are commonly cited by Thai prostitutes as one of their primary rationales for working in the skin trade".[5] The importance of filial piety can be expressed in this quote from the Analects of Confucius: "Yu Tzu said, 'It is rare for a man whose character is such that he is good as a son and obedient as a young man to have the inclination to transgress against his superiors; it is unheard of for one who has no such inclination to be inclined to start a rebellion. The gentleman devotes his efforts to the roots, for once the roots are established, the Way will grow there from. Being good as a son and obedient as a young man is, perhaps, the root of a man's character'".

Duty varies between different cultures and continents. Duty in Asia and Latin America is commonly more heavily weighted than in Western culture. According to a study done on attitudes toward family obligation:

"Asian and Latin American adolescents possessed stronger values and greater expectations regarding their duty to assist, respect, and support their families than their peers with European backgrounds".[6]

The deeply rooted tradition of duty among both Asian and Latin American cultures contributes to much of the strong sense of duty that exists in comparison to western cultures. Michael Peletz discusses the concept of duty in his book Gender, Sexuality, and Body Politics in Modern Asia:

"Notions of filial duty … are commonly invoked to mobilize the loyalties, labor power, and other resources children in the ostensible interests of the household and, in some cases, those of the lineage clan as a whole. Doctrines of filial piety … attuned to them may thus be a source of great comfort and solace to the elders but they can also be experienced as stressful, repressive, or both by those who are enjoined to honor their parents’ (and grandparents’) wishes and unspoken expectations".[7]

An arranged marriage is an example of an expected duty in Asia and the Middle East. In an arranged marriage relating to duty, it is expected that the wife will move in with the husband's family and household to raise their children. Patrilocal residence is usual; rarely does the man move in with the woman, or is the married couple allowed to start their own household and life somewhere else. They need to provide for the entire family in labor and care for the farms and family. Older generations rely heavily on the help from their children's and grandchildren's families. This form of duty is in response to keeping the lineage of a family intact and obliging to the needs of elders.

Criticisms of the concept

Friedrich Nietzsche is among the fiercest critics of the concept of duty. "What destroys a man more quickly", he asks, "than to work, think, and feel without inner necessity, without any deep personal desire, without pleasure—as a mere automaton of “duty”?" (The Antichrist, § 11)

Schopenhauer's writings, among them On the Basis of Morality, had a profound effect on Nietzsche and led him to a series of inversions to show that morality was not based in "compassion or sympathy" but in life overcoming itself through the will to power. Among these inversions "duty" and "pity," from Kant and Schopenhauer respectively.

Ayn Rand, a youthful admirer of Nietzsche, anchored her morality against Kant's notion of duty. "In a deontological theory, all personal desires are banished from the realm of morality; a personal desire has no moral significance, be it a desire to create or a desire to kill. For example, if a man is not supporting his life from duty, such a morality makes no distinction between supporting it by honest labor or by robbery. If a man wants to be honest, he deserves no moral credit; as Kant would put it, such honesty is 'praiseworthy,' but without 'moral import.'"[8]