Kaharingan is a folk religion professed by many Dayaks in Kalimantan, Indonesia; particularly Central Kalimantan, although many have converted to Christianity or Islam. The word means life, and this belief system includes a concept of a supreme deity—although this may be the result of the need to conform to the idea of "One Supreme God" (Ketuhanan yang Maha Esa), which is the first principle of the Indonesian state ideology Pancasila. Hindu-Javanese influence can be seen in this religion, and the Indonesian government views it as a form of Hinduism because the Indonesian government recognizes only six official religions, and Kaharingan is not one of them.[1][2] The main festival of Kaharingan is the Tiwah festival, which lasts for thirty days, and involves the sacrifice of many animals like buffaloes, cows, pigs and chickens, as offerings to the Supreme God.[3] The supreme God in Kaharingan is called Ranying. In addition, the religion has ritual offerings called Yadnya, places of worship called Balai Basarah or Balai Kaharingan and a holy book called Panaturan, Talatah Basarah (group of prayers) and Tawar (a guide to seek God's help by giving rice). 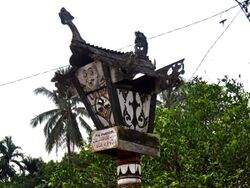 Sandung of Dayak Pesaguan people in Ketapang Regency, West Kalimantan. Note a sculpture of a dragon above it 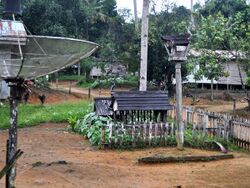 Sandung of Dayak Pebihingan people, side by side with two tombs. Ketapang Regency

The term Kaharingan comes from the Old Dayak word "Haring" meaning "Life" or "Alive". This concept is expressed in the symbol of the faith depicting the Tree of Life. This Tree of Life resembles a spear that has three branches on eitherside, some facing up and some down. At the bottom of the symbol are two receptacles, while at the very top are a hornbill and the sun. The hornbill bird and the sun represent Ranying Mahalala meaning God Almighty, Source of all life on earth.

The spear and its branches denote the upper world and the afterlife, while the lower part where are the receptacles convey the idea of man’s earthly life. Although both the spiritual world and the earthly world are different, but they are closely connected to one another and are inseparable since they are both interdependent.

The branches where some face up while others face down mean that there is an eternal balance between the earthly and the afterlife. That life on earth is temporary, and that human life is designed for the hereafter.

Altogether the Tree of Life expresses the core of the Kaharingan faith, which is that Human Life must be a balance and kept in harmony between man and his fellow humans, between man and his natural environment, and between man and the Almighty. This is also the basic concept of the Balinese Hindu religion, where in Bali it is known as the Tri Hita Karana.

In practice the Ngaju Dayaks focus on the supernatural world of spirits, including ancestral spirit. For them, the secondary funeral is most important, usually held after several months or even years after burial. During the second funeral rites (known as tiwah) the bones are exhumed and cleansed then placed in a special mausoleum, called sandung. The spirit of the deceased is then believed to watch over the village. The mausoleums are often beautifully decorated showing scenes of the upper world. An ornate ship of the dead made of rubber is usually placed next to the remains depiciting his entourage that accompany the soul to paradise.

One of the most outstanding features of the Dayak faith is their Local Wisdom and innate concern to preserve the forest and the natural environment. There are strict rules and directives on how to treat the rainforests, what may be done or taken from the forests and what are taboo. The Dayaks’ local wisdom directs that trespassing these rules will destroy the balance of the forest and animals living in the forest, and so directly or indirectly will adversely damage communities living from the forest bounty.

Recognition by the Indonesian government

Among the many tribes of Dayaks in Borneo, those living in the upper reaches of the rivers in the province of Central Kalimantan are the Dayak Ngaju, the Lawangan, the Ma'anyan and the Ot Danum, known as the Barito Dayaks, named after the large Barito river. The Ngaju, who inhabit the Kahayan river basin by the present city of Palangkaraya, are involved in agricultural commerce, planting rice, cloves, coffee, palm oil, pepper and cocoa, whilst, the other tribes still mostly practice subsistence farming through the slash and burn lifestyle. The Dayak Ngaju were more open to technological and cultural influences from outside than most other Dayak, even during precolonial times. With the arrival of the Dutch and - in 1835 - the missionary Rheinische Mission (later followed up by the Basler Mission, many converted to Christianity. The missionaries founded schools and increased the literacy rate. Education stimulated a 'national awakening' among the Ngaju and Ma'anyan Dayak.

Already long before the Second World War, the Dayak founded nationalistic political parties. During the Indonesian battle for independence against the Dutch, the Dayak from the Kalimantan region fought under Major Tjilik Riwut, a parachutist from the Ngaju Dayak who practiced the traditional religion. After the proclamation of independence, Jakarta decided that the Islamic Banjarmasin and mostly Dayak area west of it, should be one province. The plan got resistance from the Dayak - the Ngaju in front - which demanded a sole province. Under Riwut, which had become big during the revolution, the Dayak began a small guerrilla. The Indonesian army limited escalation of the conflict, probably because Riwut had been a loyal soldier. In 1957, the province of Kalimantan Tengah ("Central Kalimantan") or 'KalTeng' was officially formed by Presidential Law. The government was led by the Ngaju, and Rawit became governor. The 'battle' was about a sole province, together with a revaluation of the traditional Dayak culture, especially the religious part - a reaction on the worsening missionaries. The traditional religions of the Ngaju, Ot Danum, Ma'anyan and other Dayak was named Kaharingan ('power of life').

After the Communist Party of Indonesia was declared illegal in the 1960s, the subject 'religion' became very sensitive. The state ideology saw religion as the belief in one God and the membership ow a 'acknowledged' world religion with a holy book. The Dayak were seen as 'atheists', which were highly associated with the communist ideology, and had to pick between two options: conversion to a world religion or being pressured by local authorities to do so. With this in mind; it is fairly clear why the missions with their schools, hospitals and minimal pressure, had much more success after the 1960s. Compared to the environments in the 17th and 18th century, Christianity offered more possibilities for social progress than Islam. Over time the ban on local religions was abandoned. In 1980, Kaharingan was officially recognised as religion, but only as a part of the Hindu Dharma, so in fact it was placed under Hinduism. In Central Kalimantan, a small minority does practice this religion.

The carnival in the Jungle

In the religion of the Ngaju, the supernatural world is important, in which also the souls of ancestors have their place. Just like among other Dayak, the Ngaju known ritual re-burial, which usually takes place several months (sometimes several years) after the initial burial. This re-burial is very important for the soul of the deceased, so it can reach the highest point in heaven. With practicing the rytes, they protect themselves against bad supernatural powers. The first funeral takes place just after someone has died. During this ceremony, masked dancers protect the deceased against the bad spirits. Guided by drums, the kaharingan-priests start singing, which will send the soul to heaven. On its journey in the traditional ship of souls it is accompanied by spirits. Once in heaven, which consists of several 'layers', the soul has to wait in the lowest layer until the re-burial takes place.

During this second ritual (tiwah), the remainders of the deceased are excavated, cleaned and put in a special grave. These woodcarved and decorated graves often have the shape of a bird or watersnake and are decorated with images of the hereafter. Too bad sandung from the factory replace the traditional tombes. The tiwah is a big, complex and long lasting event. The cost vary between US$6,000 and US$12,000. It's common that several families hold a tiwah together, so they can spread the cost of sacrificed animals like a big number of waterbuffalo's and pigs. Once there were more than 200 souls brought to a higher level in one ceremony. But a tiwah also is a happy event. In the open air, foodstalls and shops are put up, and at some distance, there is also some gambling. The tiwah is the carnival of the jungle.

Sandung made of concrete are not the only changes in the Kaharingan religion. To make the religion acceptable for the government a council was set up, which had to control the theological and ritual activities of the about 330,000 supporters. None of the about 78 basir upu (top specialists about rites) are part of the council and also the about three hundred kaharingan priests are not in there as well. The council reflects aspects of the religion which are also known in other big religions. It also organises weekly meetings in specially built kaharingan-communal rooms, complete with speeches, prayers and psalms. Furthermore, the council registers and coordinates all tiwah (there are two to ten every year), before asking the police for a permit.

From early times the Iban believed that fighting cocks used by the supernatural, turned into human warriors and the cock fight is then closely tied with "intangible qualities of human nature, spiritual fulfillment and religious refinement"[4]

Shamanic curing or balian is one of the core features of Kaharingan ritual practices. Because this healing practice often occurs as a result of the loss of a soul resulting in some kind of illness, the focus of this practice is thus on the body. Sickness comes by offending one of the many spirits inhabiting the earth and fields, usually from a failure to sacrifice to them. The goal of the balian is to call back the wayward soul and restore the health of the community through trance, dance, and possession.