Short description: Ancient Greek aphorism; one of the Delphic maxims 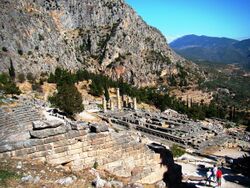 Ruins of forecourt of the Temple of Apollo at Delphi, where "know yourself" was once said to be inscribed 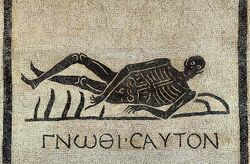 A memento mori mosaic from excavations in the convent of San Gregorio in Rome, featuring the Greek motto.

The Ancient Greece aphorism "know thyself" (Greek: γνῶθι σεαυτόν, transliterated: gnōthi seauton; also ... σαυτόν … sauton with the ε contracted) is the first of three Delphic maxims inscribed in the forecourt of the Temple of Apollo at Delphi according to the Greek writer Pausanias (10.24.1).[1] The two maxims that follow "know thyself" were "nothing to excess" and "certainty brings insanity".[2] In Latin the phrase, "know thyself", is given as nosce te ipsum[3] or temet nosce.[4]

The maxim, or aphorism, "know thyself" has had a variety of meanings attributed to it in literature, and over time, as in early ancient Greek the phrase means "know thy measure".[5]

The Greek aphorism has been attributed to at least the following ancient Greek sages:

Diogenes Laërtius attributes it to Thales (Lives I.40), but also notes that Antisthenes in his Successions of Philosophers attributes it to Phemonoe, a mythical Greek poet, though admitting that it was appropriated by Chilon. In a discussion of moderation and self-awareness, the Roman poet Juvenal quotes the phrase in Greek and states that the precept descended e caelo (from heaven) (Satires 11.27). The 10th-century Byzantine encyclopedia the Suda recognized Chilon[7] and Thales[12] as the sources of the maxim "Know Thyself".

The authenticity of all such attributions is doubtful; according to Parke and Wormell (1956), "The actual authorship of the three maxims set up on the Delphian temple may be left uncertain. Most likely they were popular proverbs, which tended later to be attributed to particular sages."[13][14]

The ancient Greek playwright Aeschylus uses the maxim "know thyself" in his play Prometheus Bound. The play, about a mythological sequence, thereby places the maxim within the context of Greek mythology. In this play, the demi-god Prometheus first rails at the Olympian gods, and against what he believes to be the injustice of his having been bound to a cliffside by Zeus, king of the Olympian gods. The demi-god Oceanus comes to Prometheus to reason with him, and cautions him that he should "know thyself".[15] In this context, Oceanus is telling Prometheus that he should know better than to speak ill of the one who decides his fate and accordingly, perhaps he should better know his place in the "great order of things".

One of Socrates's students, the historian Xenophon, described some of the instances of Socrates's use of the Delphic maxim "Know Thyself" in his history titled: Memorabilia. In this writing, Xenophon portrayed his teacher's use of the maxim as an organizing theme for Socrates's lengthy dialogue with Euthydemus.[16]

Plato, another student of Socrates, employs the maxim "Know Thyself" extensively by having the character of Socrates use it to motivate his dialogues. Benjamin Jowett's index to his translation of the Dialogues of Plato lists six dialogues which discuss or explore the Delphic maxim: "know thyself". These dialogues (and the Stephanus numbers indexing the pages where these discussions begin) are Charmides (164D), Protagoras (343B), Phaedrus (229E), Philebus (48C), Laws (II.923A), Alcibiades I (124A, 129A, 132C).[17]

In Plato's Charmides, Critias argues that "succeeding sages who added 'never too much', or, 'give a pledge, and evil is nigh at hand', would appear to have so misunderstood them; for they imagined that 'know thyself!' was a piece of advice which the god gave, and not his salutation of the worshippers at their first coming in; and they dedicated their own inscription under the idea that they too would give equally useful pieces of advice."[18] In Critias' opinion "know thyself!" was an admonition to those entering the sacred temple to remember or know their place and that "know thyself!" and "be temperate!" are the same.[19] In the balance of the Charmides, Plato has Socrates lead a longer inquiry as to how we may gain knowledge of ourselves.

In Plato's Phaedrus, Socrates uses the maxim "know thyself" as his explanation to Phaedrus to explain why he has no time for the attempts to rationally explain mythology or other far flung topics. Socrates says, "But I have no leisure for them at all; and the reason, my friend, is this: I am not yet able, as the Delphic inscription has it, to know myself; so it seems to me ridiculous, when I do not yet know that, to investigate irrelevant things."[20]

In Plato's Protagoras, Socrates lauds the authors of pithy and concise sayings delivered precisely at the right moment and says that Lacedaemon, or Sparta, educates its people to that end. Socrates lists the Seven Sages as Thales, Pittacus, Bias, Solon, Cleobulus, Myson, and Chilon, who he says are gifted in that Lacedaemonian art of concise words "twisted together, like a bowstring, where a slight effort gives great force".[21] Socrates says examples of them are, "the far-famed inscriptions, which are in all men's mouths—'Know thyself', and 'Nothing too much'".[22] Having lauded the maxims, Socrates then spends a great deal of time getting to the bottom of what one of them means, the saying of Pittacus, "Hard is it to be good." The irony here is that although the sayings of Delphi bear "great force", it is not clear how to live life in accordance with their meanings. Although, the concise and broad nature of the sayings suggests the active partaking in the usage and personal discovery of each maxim; as if the intended nature of the saying lay not in the words but the self-reflection and self-referencing of the person thereof.

In Plato's Philebus dialogue, Socrates refers back to the same usage of "know thyself" from Phaedrus to build an example of the ridiculous for Protarchus. Socrates says, as he did in Phaedrus, that people make themselves appear ridiculous when they are trying to know obscure things before they know themselves.[23] Plato also alluded to the fact that understanding "thyself" would have a greater yielded factor of understanding the nature of a human being. Syllogistically, understanding oneself would enable thyself to have an understanding of others as a result. 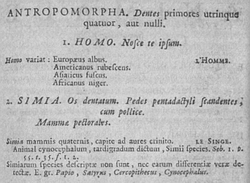 The Suda, a 10th-century encyclopedia of Greek knowledge, states: "the proverb is applied to those whose boasts exceed what they are",[7] and that "know thyself" is a warning to pay no attention to the opinion of the multitude.[24]

Self-knowledge was an important concept in the writings of the 12-13th century Spanish Sufi Ibn Arabi. He distinguished between various philosophical and mystical meanings of "Know Thyself" and the hadith "Who knows himself, knows his Lord."[25]

One work by the Medieval philosopher Peter Abelard is titled Scito te ipsum ("know yourself") or Ethica.

From 1539 onward, the phrase nosce te ipsum and its Latin variants were used in the anonymous texts written for anatomical fugitive sheets printed in Venice as well as for later anatomical atlases printed throughout Europe. The 1530s fugitive sheets are the first instances in which the phrase was applied to knowledge of the human body attained through dissection.[26]

In 1600, in his play Hamlet, Shakespeare writes, "To thine own self be true."

In 1734, Alexander Pope wrote a poem entitled "An Essay on Man, Epistle II", which begins "Know then thyself, presume not God to scan, The proper study of mankind is Man."[28]

In 1735, Carl Linnaeus published the first edition of Systema Naturae in which he described humans (Homo) with the simple phrase "Nosce te ipsum".[29]

In 1750, Benjamin Franklin, in his Poor Richard's Almanack, observed the great difficulty of knowing one's self, with: "There are three Things extremely hard, Steel, a Diamond, and to know one's self."[30]

In 1754, Jean-Jacques Rousseau lauded the "inscription of the Temple at Delphi" in his Discourse on the Origin of Inequality.

In 1831, Ralph Waldo Emerson wrote a poem titled "Γνώθι Σεαυτόν", or Gnothi Seauton ('Know Thyself'), on the theme of "God in thee". The poem was an anthem to Emerson's belief that to "know thyself" meant knowing the God that Emerson felt existed within each person.[31]

In 1832, Samuel T. Coleridge wrote a poem titled "Self Knowledge" in which the text centers on the Delphic maxim "Know Thyself" beginning "Gnôthi seauton!—and is this the prime And heaven-sprung adage of the olden time!—" and ending with "Ignore thyself, and strive to know thy God!" Coleridge's text references JUVENAL, xi. 27.[32]

In 1857, Allan Kardec asks in The Spirits Book (question 919): "What is the most effective method for guaranteeing self-improvement and resisting the attraction of wrongdoing?" and obtains the answer from the Spirits "A philosopher of antiquity once said, 'Know thyself'".[33] Acknowledging the wisdom of the maxim, he then asks about the means of acquiring self-knowledge, obtaining a detailed answer with practical instructions and philosophical-moral considerations.

In 1902, Hugo von Hofmannsthal had his 16th-century alter ego in his letter to Francis Bacon mention a book he intended to call Nosce te ipsum.

In 1978 Idries Shah wrote in Learning How to Learn, p. 38, "People have to know more about themselves before they take on what are so often misconceived projects." In 1997 he explained "Know Thyself" thus in The Commanding Self, p. 15, "'He who knows himself, knows his Lord' means, among other things, that self-deception prevents knowledge... The first self about which to obtain knowledge is the secondary, false self which stands in the way..." The theme of knowing oneself and knowing God is also featured in the above citations from Ibn Arabi, Pope, Coleridge and Emerson, in different ways.

The Wachowskis used one of the Latin versions (temet nosce) of this aphorism as inscription over the Oracle's kitchen doorway in their movies The Matrix (1999)[34] and The Matrix Revolutions (2003).[35] The character Nomi from the series Sense8, also directed by The Wachowskis, has a tattoo on her arm with the Greek version of this phrase.

"Know Thyself" is the motto of Hamilton College of Lyceum International School (Nugegoda, Sri Lanka) and of İpek University (Ankara, Turkey).[36] The Latin phrase "Nosce te ipsum" is the motto of Landmark College.

Knowing the Self is a core principle towards spiritual liberation or Moksha in Indian philosophical traditions, including Advaita Vedanta. In the Upanishads, it appears as "ātmā́naṃ viddhi", that literally translates to "know thyself". The idea is reflected through the four key statements known as Mahavakya, found in the four Vedas, which form the foundations of Vedanta philosophy.

In The Art of War, the maxim 知彼知己，百战不殆 means "know others and know thyself, and you will not be endangered by innumerable battles". In this saying by Sun Tze (孙子, Sun Zi), the idea of knowing oneself is paramount.