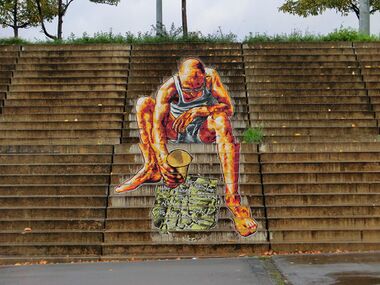 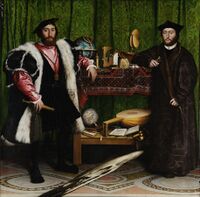 The Ambassadors, 1533, Hans Holbein the Younger 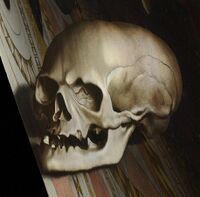 The Ambassador's Skull: detail when viewed from the accidental viewpoint (from The Ambassadors – Hans Holbein the Younger)

Accidental viewpoint contributes to the successful perception of anamorphic images, which intentionally appear distorted from non-accidental viewpoints. Other than viewing the image from a specific location, the distortion can be countered by looking at the image when reflected in a mirror (known as catoptric anamorphoses[9]). How our brains interpret images make it so that the geometry of 2D object is related to that of 3D objects, rather than just taking the image for how it is, a drawing made from a single viewpoint.[2] Related to this is the generic viewpoint assumption, which is the tendency to assume that image characteristics are not a result of an accidental viewpoint.[10] The artist and mathematician Niceron developed a method of creating perspective anamorphic images by segmenting an image into a grid then distorting each segment of the grid from a square shape to a trapezoidal shape. The image can then be reconciled by viewing it from a specific point.[9] Two dimensional art objects generally use the assumption of a single viewpoint to give the illusion of depth (monocular depth cues), Hans Holbein's The Ambassadors (1533) is no different in that sense, however, Holbein also includes an anamorphic image of a skull which has a completely different view point in order to accurately view the object. In the 17th century, perspective boxes (peep boxes, raree shows) became popular attractions. These took advantage of the accidental viewpoint by creating a scene that appeared to be three dimensional when viewed through a single hole in the box. A modern representation of anamorphic images that makes use of an accidental viewpoint can be found in illusionistic street art.[9]