Short description: Fluid under thermodynamic or mechanical conditions which force it to be a liquid

A p-v diagram for liquid water. The compressed fluid region is located to the left of the blue line (the liquid-vapor phase boundary). 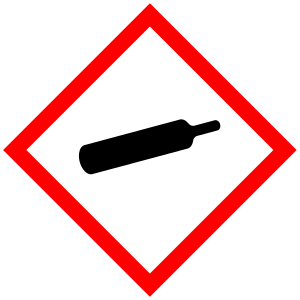 The international pictogram for compressed gases.

A compressed fluid (also called a compressed or unsaturated liquid,[1] subcooled fluid or liquid) is a fluid under mechanical or thermodynamic conditions that force it to be a liquid.[2]

Conditions that cause a fluid to be compressed include:

The term compressed liquid emphasizes that the pressure is greater than the saturation pressure for the given temperature. Compressed liquid properties are relatively independent of pressure.