Short description: Static pressure exerted by the weight of the atmosphere

In most circumstances, atmospheric pressure is closely approximated by the hydrostatic pressure caused by the weight of air above the measurement point. As elevation increases, there is less overlying atmospheric mass, so that atmospheric pressure decreases with increasing elevation. Because the atmosphere is thin relative to the Earth's radius—especially the dense atmospheric layer at low altitudes—the Earth's gravitational acceleration as a function of altitude can be approximated as constant and contributes little to this fall off. Pressure measures force per unit area, with SI units of pascals (1 pascal = 1 newton per square metre, 1 N/m2). On average, a column of air with a cross-sectional area of 1 square centimetre (cm2), measured from mean (average) sea level to the top of Earth's atmosphere, has a mass of about 1.03 kilogram and exerts a force or "weight" of about 10.1 newtons, resulting in a pressure of 10.1 N/cm2 or 101 kN/m2 (101 kilopascals, kPa). A column of air with a cross-sectional area of 1 in2 would have a weight of about 14.7 lbf, resulting in a pressure of 14.7 lbf/in2. 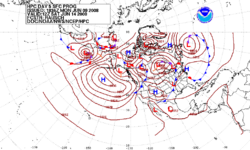 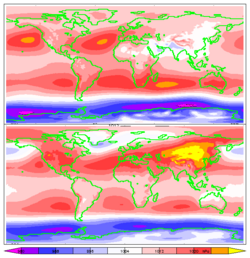 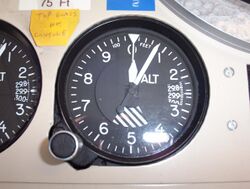 The altimeter setting in aviation is an atmospheric pressure adjustment.

Average sea-level pressure is 1013.25 hPa (29.921 inHg; 760.00 mmHg). In aviation weather reports (METAR), QNH is transmitted around the world in hectopascals or millibars (1 hectopascal = 1 millibar), except in the United States , Canada , and Japan where it is reported in inches of mercury (to two decimal places). The United States and Canada also report sea-level pressure SLP, which is adjusted to sea level by a different method, in the remarks section, not in the internationally transmitted part of the code, in hectopascals or millibars.[6] However, in Canada's public weather reports, sea level pressure is instead reported in kilopascals.[7]

Surface pressure is the atmospheric pressure at a location on Earth's surface (terrain and oceans). It is directly proportional to the mass of air over that location.

The average value of surface pressure on Earth is 985 hPa.[8] This is in contrast to mean sea-level pressure, which involves the extrapolation of pressure to sea-level for locations above or below sea-level. The average pressure at mean sea-level (MSL) in the International Standard Atmosphere (ISA) is 1013.25 hPa, or 1 atmosphere (atm), or 29.92 inches of mercury.

Pressure (p), mass (m), and the acceleration due to gravity (g), are related by P = F/A = (m*g)/A, where A is surface area. Atmospheric pressure is thus proportional to the weight per unit area of the atmospheric mass above that location.

A very local storm above Snæfellsjökull (Iceland), showing clouds formed on the mountain by orographic lift 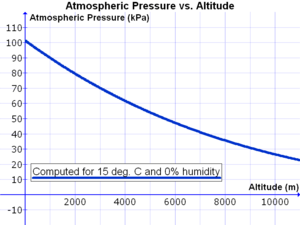 Variation in atmospheric pressure with altitude, computed for 15 °C and 0% relative humidity.

Pressure on Earth varies with the altitude of the surface; so air pressure on mountains is usually lower than air pressure at sea level. Pressure varies smoothly from the Earth's surface to the top of the mesosphere. Although the pressure changes with the weather, NASA has averaged the conditions for all parts of the earth year-round. As altitude increases, atmospheric pressure decreases. One can calculate the atmospheric pressure at a given altitude.[9] Temperature and humidity also affect the atmospheric pressure. Pressure is proportional to temperature and inversely proportional to humidity. And it is necessary to know both of these to compute an accurate figure. The graph Template:If mobile was developed for a temperature of 15 °C and a relative humidity of 0%.

. The values in these equations are: 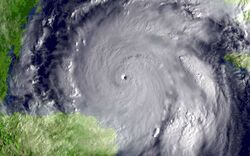 Atmospheric pressure varies widely on Earth, and these changes are important in studying weather and climate. See pressure system for the effects of air pressure variations on weather.

Atmospheric pressure shows a diurnal or semidiurnal (twice-daily) cycle caused by global atmospheric tides. This effect is strongest in tropical zones, with an amplitude of a few hectopascals, and almost zero in polar areas. These variations have two superimposed cycles, a circadian (24 h) cycle and semi-circadian (12 h) cycle.

The lowest non-tornadic atmospheric pressure ever measured was 870 hPa (0.858 atm; 25.69 inHg), set on 12 October 1979, during Typhoon Tip in the western Pacific Ocean. The measurement was based on an instrumental observation made from a reconnaissance aircraft.[14]

Measurement based on depth of water

One atmosphere (101.325 kPa or 14.7 psi) is also the pressure caused by the weight of a column of fresh water of approximately 10.3 m (33.8 ft). Thus, a diver 10.3 m underwater experiences a pressure of about 2 atmospheres (1 atm of air plus 1 atm of water). Conversely, 10.3 m is the maximum height to which water can be raised using suction under standard atmospheric conditions.

Low pressures, such as natural gas lines, are sometimes specified in inches of water, typically written as w.c. (water column) gauge or w.g. (inches water) gauge. A typical gas-using residential appliance in the US is rated for a maximum of 1/2 psi, which is approximately 14 w.g. (3487 Pa or 34.9 millibars). Similar metric units with a wide variety of names and notation based on millimetres, centimetres or metres are now less commonly used. 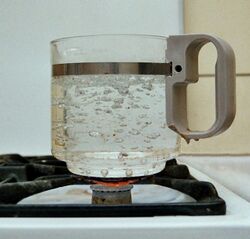 Pure water boils at 100 °C (212 °F) at earth's standard atmospheric pressure. The boiling point is the temperature at which the vapor pressure is equal to the atmospheric pressure around the liquid.[15] Because of this, the boiling point of liquids is lower at lower pressure and higher at higher pressure. Cooking at high elevations, therefore, requires adjustments to recipes[16] or pressure cooking. A rough approximation of elevation can be obtained by measuring the temperature at which water boils; in the mid-19th century, this method was used by explorers.[17] Conversely, if one wishes to evaporate a liquid at a lower temperature, for example in distillation, the atmospheric pressure may be lowered by using a vacuum pump, as in a rotary evaporator.

An important application of the knowledge that atmospheric pressure varies directly with altitude was in determining the height of hills and mountains thanks to the availability of reliable pressure measurement devices. In 1774, Maskelyne was confirming Newton's theory of gravitation at and on Schiehallion mountain in Scotland, and he needed to accurately measure elevations on the mountain's sides. William Roy, using barometric pressure, was able to confirm Maskelyne's height determinations, the agreement being to within one meter (3.28 feet). This method became and continues to be useful for survey work and map making.[18]