Short description: Extent of the observable world seen at any given moment 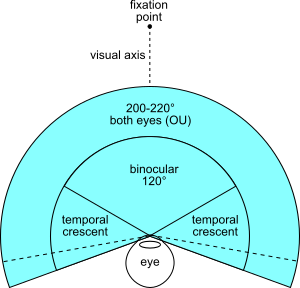 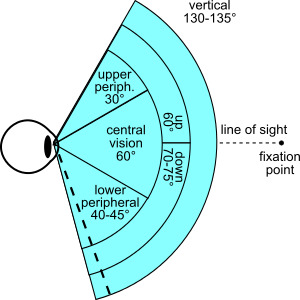 Angle of view can be measured horizontally, vertically, or diagonally.

A 360-degree panorama of the Milky Way at the Very Large Telescope. In the image, the Milky Way appears like an arc of stars spanning horizon to horizon with two streams of stars seemingly cascading down like waterfalls.[1]

The field of view (FoV) is the extent of the observable world that is seen at any given moment. In the case of optical instruments or sensors it is a solid angle through which a detector is sensitive to electromagnetic radiation.

In the context of human and primate vision, the term "field of view" is typically only used in the sense of a restriction to what is visible by external apparatus, like when wearing spectacles[2] or virtual reality goggles. Note that eye movements are allowed in the definition but do not change the field of view when understood this way.

If the analogy of the eye's retina working as a sensor is drawn upon, the corresponding concept in human (and much of animal vision) is the visual field.[3] It is defined as "the number of degrees of visual angle during stable fixation of the eyes".[4] Note that eye movements are excluded in the visual field's definition. Humans have a slightly over 210-degree forward-facing horizontal arc of their visual field (i.e. without eye movements),[5][6] (with eye movements included it is slightly larger, as you can try for yourself by wiggling a finger on the side), while some birds have a complete or nearly complete 360-degree visual field. The vertical range of the visual field in humans is around 150 degrees.[5]

Similarly, color vision and the ability to perceive shape and motion vary across the visual field; in humans color vision and form perception are concentrated in the center of the visual field, while motion perception is only slightly reduced in the periphery and thus has a relative advantage there. The physiological basis for that is the much higher concentration of color-sensitive cone cells and color-sensitive parvocellular retinal ganglion cells in the fovea – the central region of the retina, together with a larger representation in the visual cortex – in comparison to the higher concentration of color-insensitive rod cells and motion-sensitive magnocellular retinal ganglion cells in the visual periphery, and smaller cortical representation. Since rod cells require considerably less light to be activated, the result of this distribution is further that peripheral vision is much more sensitive at night relative to foveal vision (sensitivity is highest at around 20 deg eccentricity).[3]

In machine vision the lens focal length and image sensor size sets up the fixed relationship between the field of view and the working distance. Field of view is the area of the inspection captured on the camera’s imager. The size of the field of view and the size of the camera’s imager directly affect the image resolution (one determining factor in accuracy). Working distance is the distance between the back of the lens and the target object.

In computed tomography (abdominal CT pictured), the field of view (FOV) multiplied by scan range creates a volume of voxels.

In tomography, the field of view is the area of each tomogram. In for example computed tomography, a volume of voxels can be created from such tomograms by merging multiple slices along the scan range.

In remote sensing, the solid angle through which a detector element (a pixel sensor) is sensitive to electromagnetic radiation at any one time, is called instantaneous field of view or IFOV. A measure of the spatial resolution of a remote sensing imaging system, it is often expressed as dimensions of visible ground area, for some known sensor altitude.[8][9] Single pixel IFOV is closely related to concept of resolved pixel size, ground resolved distance, ground sample distance and modulation transfer function.

In photography, the field of view is that part of the world that is visible through the camera at a particular position and orientation in space; objects outside the FOV when the picture is taken are not recorded in the photograph. It is most often expressed as the angular size of the view cone, as an angle of view. For a normal lens, the diagonal (or horizontal or vertical) field of view can be calculated as:

Field of view diameter in microscopy

In microscopy, the field of view in high power (usually a 400-fold magnification when referenced in scientific papers) is called a high-power field, and is used as a reference point for various classification schemes.

For an objective with magnification [math]\displaystyle{ m }[/math], the FOV is related to the Field Number (FN) by

if other magnifying lenses are used in the system (in addition to the objective), the total [math]\displaystyle{ m }[/math] for the projection is used.