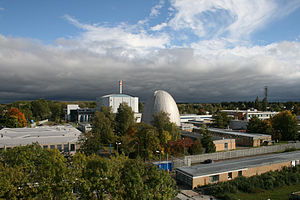 The FRM II is located in the immediate neighbourhood of FRM I, on the research and university campus near Garching (18 km north of Munich). It is operated by Technische Universität München. Several other universities and research institutions are taking part in the scientific use.

The reactor was built by Siemens AG. It went critical on March 2, 2004, and reached the full power of 20 MW on August, 24. Since April 2005, it is in routine operation. The regular schedule comprises 4 reactor cycles per year, with 60 days per cycle.

The FRM II is optimized for neutron scattering experiments at beam tubes and neutron guides. Furthermore, there are irradiation facilities, for example to produce medically used radioisotopes (as Lu-177), and a tumour treatment facility. The more than 25 scientific instruments are operated by different chairs of the TU München, other universities, Helmholtz Centres and Max-Planck Institutes. The Jülich Centre for Neutron Science (JCNS) of the Forschungszentrum Jülich operates its own outstation at the FRM II. Each instrument offers 2/3 of its beam time for scientists from all over the world. 30 percent is foreseen for industrial use.[1]