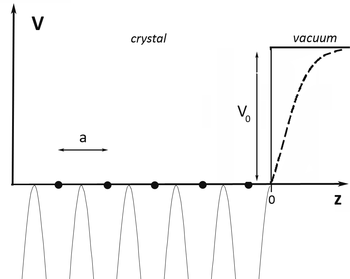 Figure 1. Simplified one-dimensional model of a periodic crystal potential terminating at an ideal surface. At the surface, the model potential jumps abruptly to the vacuum level (solid line). The dashed line represents a more realistic picture, where the potential reaches the vacuum level over some distance.

Figure 2. Real part of the type of solution to the one-dimensional Schrödinger equation that corresponds to the bulk states. These states have Bloch character in the bulk, while decaying exponentially into the vacuum.

Figure 3. Real part of the type of solution to the one-dimensional Schrödinger equation that corresponds to surface states. These states decay into both the vacuum and the bulk crystal and thus represent states localized at the crystal surface.

As stated by Bloch's theorem, eigenstates of the single-electron Schrödinger equation with a perfectly periodic potential, a crystal, are Bloch waves[2]

Here [math]u_{n\boldsymbol{k}}(\boldsymbol{r})[/math] is a function with the same periodicity as the crystal, n is the band index and k is the wave number. The allowed wave numbers for a given potential are found by applying the usual Born–von Karman cyclic boundary conditions.[2] The termination of a crystal, i.e. the formation of a surface, obviously causes deviation from perfect periodicity. Consequently, if the cyclic boundary conditions are abandoned in the direction normal to the surface the behavior of electrons will deviate from the behavior in the bulk and some modifications of the electronic structure has to be expected.

A simplified model of the crystal potential in one dimension can be sketched as shown in Figure 1.[3] In the crystal, the potential has the periodicity, a, of the lattice while close to the surface it has to somehow attain the value of the vacuum level. The step potential (solid line) shown in Figure 1 is an oversimplification which is mostly convenient for simple model calculations. At a real surface the potential is influenced by image charges and the formation of surface dipoles and it rather looks as indicated by the dashed line.

Given the potential in Figure 1, it can be shown that the one-dimensional single-electron Schrödinger equation gives two qualitatively different types of solutions.[4]

The first type of solution can be obtained for both metals and semiconductors. In semiconductors though, the associated eigenenergies have to belong to one of the allowed energy bands. The second type of solution exists in forbidden energy gap of semiconductors as well as in local gaps of the projected band structure of metals. It can be shown that the energies of these states all lie within the band gap. As a consequence, in the crystal these states are characterized by an imaginary wavenumber leading to an exponential decay into the bulk.

In the discussion of surface states, one generally distinguishes between Shockley states[5] and Tamm states,[6] named after the American physicist William Shockley and the Russian physicist Igor Tamm. However, there is no real physical distinction between the two terms, only the mathematical approach in describing surface states is different.

All materials can be classified by a single number, a topological invariant; this is constructed out of the bulk electronic wave functions, which are integrated in over the Brillouin zone, in a similar way that the genus is calculated in geometric topology. In certain materials the topological invariant can be changed when certain bulk energy bands invert due to strong spin-orbital coupling. At the interface between an insulator with non-trivial topology, a so-called topological insulator, and one with a trivial topology, the interface must become metallic. More over, the surface state must have linear Dirac-like dispersion with a crossing point which is protected by time reversal symmetry. Such a state is predicted to be robust under disorder, and therefore cannot be easily localized.

A simple model for the derivation of the basic properties of states at a metal surface is a semi-infinite periodic chain of identical atoms.[1] In this model, the termination of the chain represents the surface, where the potential attains the value V0 of the vacuum in the form of a step function, figure 1. Within the crystal the potential is assumed periodic with the periodicity a of the lattice. The Shockley states are then found as solutions to the one-dimensional single electron Schrödinger equation

with the periodic potential

where l is an integer, and P is the normalization factor. The solution must be obtained independently for the two domains z<0 and z>0, where at the domain boundary (z=0) the usual conditions on continuity of the wave function and its derivatives are applied. Since the potential is periodic deep inside the crystal, the electronic wave functions must be Bloch waves here. The solution in the crystal is then a linear combination of an incoming wave and a wave reflected from the surface. For z>0 the solution will be required to decrease exponentially into the vacuum

The wave function for a state at a metal surface is qualitatively shown in figure 2. It is an extended Bloch wave within the crystal with an exponentially decaying tail outside the surface. The consequence of the tail is a deficiency of negative charge density just inside the crystal and an increased negative charge density just outside the surface, leading to the formation of a dipole double layer. The dipole perturbs the potential at the surface leading, for example, to a change of the metal work function.

Figure 4. Electronic band structure in the nearly free electron picture. Away from the Brillouin zone boundary the electron wave function has plane wave character and the dispersion relation is parabolic. At the Brillouin zone boundary the wave function is a standing wave composed of an incoming and a Bragg-reflected wave. This ultimately leads to the creation of a band gap.

The nearly free electron approximation can be used to derive the basic properties of surface states for narrow gap semiconductors. The semi-infinite linear chain model is also useful in this case.[4] However, now the potential along the atomic chain is assumed to vary as a cosine function

whereas at the surface the potential is modeled as a step function of height V0. The solutions to the Schrödinger equation must be obtained separately for the two domains z < 0 and z > 0. In the sense of the nearly free electron approximation, the solutions obtained for z < 0 will have plane wave character for wave vectors away from the Brillouin zone boundary [math]k=\pm\pi/a[/math], where the dispersion relation will be parabolic, as shown in figure 4. At the Brillouin zone boundaries, Bragg reflection occurs resulting in a standing wave consisting of a wave with wave vector [math]k = \pi/a[/math] and wave vector [math]k=-\pi/a[/math].

Here [math]G=2\pi/a[/math] is a lattice vector of the reciprocal lattice (see figure 4). Since the solutions of interest are close to the Brillouin zone boundary, we set [math]k_\perp=\bigl(\pi/a\bigr)+\kappa[/math], where κ is a small quantity. The arbitrary constants A,B are found by substitution into the Schrödinger equation. This leads to the following eigenvalues

demonstrating the band splitting at the edges of the Brillouin zone, where the width of the forbidden gap is given by 2V. The electronic wave functions deep inside the crystal, attributed to the different bands are given by

Where C is a normalization constant. Near the surface at z = 0, the bulk solution has to be fitted to an exponentially decaying solution, which is compatible with the constant potential V0.

It can be shown that the matching conditions can be fulfilled for every possible energy eigenvalue which lies in the allowed band. As in the case for metals, this type of solution represents standing Bloch waves extending into the crystal which spill over into the vacuum at the surface. A qualitative plot of the wave function is shown in figure 2.

one obtains solutions with a decaying amplitude into the crystal

The energy eigenvalues are given by

E is real for large negative z, as required. Also in the range [math]0\leq q\leq q_{max}=\frac{m a V} {\hbar^2 \pi}[/math] all energies of the surface states fall into the forbidden gap. The complete solution is again found by matching the bulk solution to the exponentially decaying vacuum solution. The result is a state localized at the surface decaying both into the crystal and the vacuum. A qualitative plot is shown in figure 3.

Surface states of a three-dimensional crystal 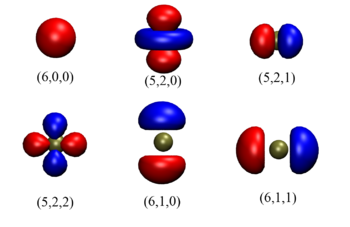 Figure 5. Atomic like orbitals of a Pt-atom. The orbitals shown are part of the double-zeta basis set used in density functional calculations. The orbitals are indexed according to the usual quantum numbers (n,l,m).

A surface state is described by the energy [math]E_s[/math] and its wave vector [math]\textbf{k}_{||}[/math] parallel to the surface, while a bulk state is characterized by both [math]\mathbf{k}_{||}[/math] and [math]\mathbf{k}_\perp[/math] wave numbers. In the two-dimensional Brillouin zone of the surface, for each value of [math]\mathbf{k}_{||}[/math] therefore a rod of [math]\mathbf{k}_\perp[/math] is extending into the three-dimensional Brillouin zone of the Bulk. Bulk energy bands that are being cut by these rods allow states that penetrate deep into the crystal. One therefore generally distinguishes between true surface states and surface resonances. True surface states are characterized by energy bands that are not degenerate with bulk energy bands. These states exist in the forbidden energy gap only and are therefore localized at the surface, similar to the picture given in figure 3. At energies where a surface and a bulk state are degenerate, the surface and the bulk state can mix, forming a surface resonance. Such a state can propagate deep into the bulk, similar to Bloch waves, while retaining an enhanced amplitude close to the surface.

Surface states that are calculated in the framework of a tight-binding model are often called Tamm states. In the tight binding approach, the electronic wave functions are usually expressed as a linear combination of atomic orbitals (LCAO), see figure 5. In this picture, it is easy to comprehend that the existence of a surface will give rise to surface states with energies different from the energies of the bulk states: Since the atoms residing in the topmost surface layer are missing their bonding partners on one side, their orbitals have less overlap with the orbitals of neighboring atoms. The splitting and shifting of energy levels of the atoms forming the crystal is therefore smaller at the surface than in the bulk.

If a particular orbital is responsible for the chemical bonding, e.g. the sp3 hybrid in Si or Ge, it is strongly affected by the presence of the surface, bonds are broken, and the remaining lobes of the orbital stick out from the surface. They are called dangling bonds. The energy levels of such states are expected to significantly shift from the bulk values.

In contrast to the nearly free electron model used to describe the Shockley states, the Tamm states are suitable to describe also transition metals and wide bandgap semiconductors.

Extrinsic surface states are usually defined as states not originating from a clean and well ordered surface. Surfaces that fit into the category extrinsic are:[7]