Short description: Mountain system at the intersection of Europe, Asia, and the Middle East 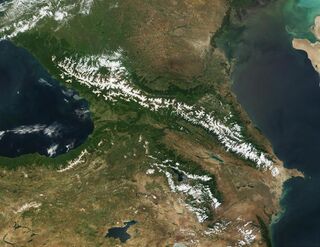 Satellite image of the Caucasus Mountains

The Caucasus Mountains[lower-alpha 1] are a mountain range at the intersection of Asia and Europe. Stretching between the Black Sea and the Caspian Sea, they are surrounded by the Caucasus region and are home to Mount Elbrus, the highest peak in Europe at 5,642 metres (18,510 ft) above sea level.

Geologically, the Caucasus Mountains belong to the Alpide belt system that extends from southeastern Europe into Asia[2] and is considered a border between the two continents.[3] The Greater Caucasus Mountains are mainly composed of Cretaceous and Jurassic rocks with the Paleozoic and Precambrian rocks in the higher regions. Some volcanic formations are found throughout the range. On the other hand, the Lesser Caucasus Mountains are formed predominantly of the Paleogene rocks with a much smaller portion of the Jurassic and Cretaceous rocks. The evolution of the Caucasus began from the Late Triassic to the Late Jurassic during the Cimmerian orogeny at the active margin of the Tethys Ocean while the uplift of the Greater Caucasus is dated to the Miocene during the Alpine orogeny.

The Javakheti Volcanic Plateau in Georgia and the surrounding volcanic ranges which extend well into central Armenia are some of the youngest features of the region. Only recently was the Caucasus a scene for intense volcanic activity: the Armenian highland was flooded by calc-alkaline basalts and andesites in the Pliocene and the highest summits of the Caucasus, the Elbrus, and the Kazbek, formed as Pleistocene-Pliocene volcanoes. The Kazbek is no longer active, but the Elbrus erupted in postglacial times and fumarole activity is registered near its summit. Contemporary seismic activity is a prominent feature of the region, reflecting active faulting and crustal shortening. Clusters of seismicity occur in Dagestan and in northern Armenia. Many devastating earthquakes have been documented in historical times, including the Spitak earthquake in December 1988 which destroyed the Gyumri-Vanadzor region of Armenia.

Mount Elbrus, at 5,642 m (18,510 ft), in the Caucasus Mountains, is sometimes cited as the highest peak in Europe. Mount Elbrus is 832 m (2,730 ft) higher than Mont Blanc, the highest peak in the Alps and Western Europe at 4,810 m (15,780 ft). However, there are some technical disagreements over whether Mount Elbrus is in Europe.[7] The crest of the Greater Caucasus Mountains is usually taken to define the Greater Caucasus Watershed which marks the continental boundary between Asia and Europe for the region between the Black and Caspian seas. This classification would place Mount Elbrus at the junction with Asia.[3]

The table below lists some of the highest peaks of the Caucasus. With the exception of Shkhara, the heights are taken from Soviet 1:50,000 mapping. The list includes the ten ultras (mountains of more than 1,500 m prominence) and all mountains over 4,500 m height with 300 m prominence. Mount Ararat (5,137 m) in Turkey is just south of the Lesser Caucasus.

The climate of the Caucasus varies both vertically (according to elevation) and horizontally (by latitude and location). Temperature generally decreases as elevation rises. Average annual temperature in Sukhumi, Abkhazia at sea level is 15 °C (59 °F) while on the slopes of Mt.Kazbek at an elevation of 3,700 metres (12,100 ft), average annual temperature falls to −6.1 °C (21.0 °F). The northern slopes of the Greater Caucasus Mountain Range are 3 °C (5.4 °F) colder than the southern slopes. The highlands of the Lesser Caucasus Mountains in Armenia, Azerbaijan, and Georgia are marked by sharp temperature contrasts between the summer and winter months due to a more continental climate.

Snow cover in several regions (Svaneti and northern Abkhazia) may reach 5 metres (16 ft). The Mt. Achishkho region, which is the snowiest place in the Caucasus, often records snow depths of 7 m (23 ft). 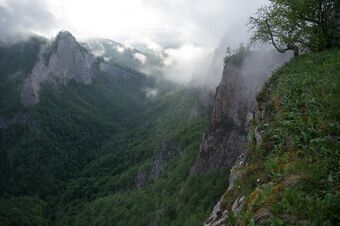 The Caucasus Mountains have a varied landscape which mainly changes according to elevation and distance from large bodies of water. The region contains biomes ranging from subtropical lowland marshes and forests to glaciers (Western and Central Caucasus), and highland semideserts, steppes, and alpine meadows in the south (mainly in Armenia and Azerbaijan).

The northern and western slopes of the Lesser Caucasus Mountains are characterized both by Colchian and other deciduous forests at lower elevations while mixed and coniferous forests (mainly spruce and fir) dominate at higher elevations. Beech forests are also common at higher elevations. The southern slopes of the Lesser Caucasus Mountains are largely covered by grasslands and steppes up to an elevation of 2,500 metres (8,200 ft). The highest areas of the region contain alpine grasslands as well. Volcanic and other rock formations are common throughout the region. The volcanic zone extends over a large area from southern Georgia into Armenia and southwestern Azerbaijan. Some of the prominent peaks of the region include Mt. Aragats, Didi Abuli, Samsari, and others. The area is characterized by volcanic plateaus, lava flows, volcanic lakes, volcanic cones and other features. The Lesser Caucasus Mountains lack the type of glaciers and glacial features that are common on the Greater Caucasus Mountain Range.

Crossing the Caucasus Mountain range was an important section of the northern arm of the Silk Route. There was one pass on the southeast end in Derbent (known as the Caspian Gates or Gates of Alexander), and multiple passes throughout the range: Jvari Pass at 2379 m and above the Darial Gorge on the Georgian Military Road, Mamison Pass on the Ossetian Military Road at 2911 m, and Roki Tunnel at 2310 m.