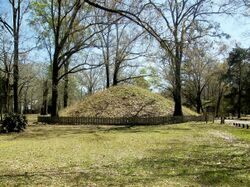 Burial mound at the site

Marksville is the type site for the Marksville culture (a local variation of the Hopewell tradition) and was the first scientifically excavated site for the culture. Centuries later the Avoyel and Natchez peoples lived in the vicinity of the site until 1700.[3] Burial mounds at the site are surrounded by a horseshoe-shaped earthen embankment about 3,000 feet (910 m) long. The site is also one of the largest of the period in the southeastern United States, with large and distinctive ring features not found elsewhere. The site's importance has been known since the 1920s, when it was first formally investigated, and it is regularly the subject of further investigation. Radiometric dating of the sites features have yielded occupancy dates from 0-400 CE.[4]

The archaeological site was declared a National Historic Landmark in 1964.[2][5]

The site was formerly operated by the State of Louisiana as a Louisiana State Park, however, in August 2020, the ownership and operations of the site transferred to the City of Marksville. As of November 2021, the site is closed to public access.