The Stability Pact for Southeastern Europe was an institution aimed at strengthening peace, democracy, human rights and economy in the countries of South Eastern Europe from 1999 to 2008. It was replaced by the Regional Cooperation Council (RCC) in February 2008. The RCC replaced it because it is more "regionally owned" than the Stability Pact, which was driven more by outside partners such as the EU. 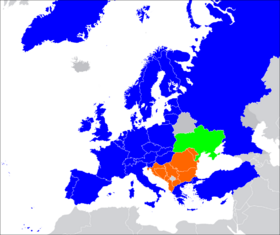 The pact was created at the initiative of the European Union on June 10, 1999, in Cologne. All of the countries of the region, except for Serbia and Montenegro (then FR Yugoslavia) and Moldova, were present at the founding conference. Representatives of Bulgaria, Romania, Russia , Turkey, United States , all members of the EU at the time, OSCE, Council of Europe and European Commission were also considered active participants.

The pact was created following the escalation of Kosovo War; stability of Kosovo was among the primary objectives.

In 2006 it was announced that the Stability Pact should be succeeded in early 2008 by a more regionally owned co-operation framework, the Regional Cooperation Council (RCC) formed by the countries of the region themselves, but with continued support and advice from the international community. The South-East European Cooperation Process should be playing an important role in this process.

The last meeting of the SPSEE took place on 28 February 2008, in Sofia, Bulgaria when it was succeeded by the Regional Cooperation Council.[1]

The pact was divided among three Working Tables, with the fourth, Regional Working Table, coordinating actions between them.

Each of the Working Tables was responsible for a set of issues, working with participant countries' governments and NGOs on resolving them.

Apart from its Director WT I relies on the work of two experts Srđan Cvijić and Talia Boati.

Working Table III deals with questions of both internal and external security. The aim is to establish a stable security environment in the region and to promote regional co-operation in fighting organised crime and corruption and on migration issues. It is divided into two sub-tables. The first one deals with Justice and Home Affairs and the second one with Defence and Security Sector Reform issues.