The R4000 is a microprocessor developed by MIPS Computer Systems that implements the MIPS III instruction set architecture (ISA). Officially announced on 1 October 1991, it was one of the first 64-bit microprocessors and the first MIPS III implementation. In the early 1990s, when RISC microprocessors were expected to replace CISC microprocessors such as the Intel i486, the R4000 was selected to be the microprocessor of the Advanced Computing Environment (ACE), an industry standard that intended to define a common RISC platform. ACE ultimately failed for a number of reasons, but the R4000 found success in the workstation and server markets.

Load and store instructions are executed by the integer pipeline, and access the on-chip 8 KB data cache.

The FPU can operate in parallel with the ALU unless there is a data or resource dependency, which causes it to stall. It contains three sub-units: an adder, a multiplier and a divider. The multiplier and divider can execute an instruction in parallel with the adder, but they use the adder in their final stages of execution, thus imposing limits to overlapping execution. Thus, under certain conditions, it can execute up to three instructions at any time, one in each unit. The FPU is capable of retiring one instruction per cycle.

The adder and multiplier are pipelined. The multiplier has a four-stage multiplier pipeline. It is clocked at twice the clock frequency of the microprocessor for adequate performance and uses dynamic logic to achieve the high clock frequency. Division has a 23- or 36-cycle latency for single- or double-precision operations and square-root has a 54- or 112-cycle latency. Division and square-root uses the SRT algorithm.

The R4000 (SC and MC configurations only) supports an external secondary cache with a capacity of 128 KB to 4 MB. The cache is accessed via a dedicated 128-bit data bus. The secondary cache can be configured either as a unified cache or as a split instruction and data cache. In the latter configuration, each cache can have a capacity of 128 KB to 2 MB.[2] The secondary cache is physically indexed, physically tagged and has a programmable line size of 128, 256, 512 or 1,024 bytes. The cache controller is on-die. The cache is built from standard static random access memory (SRAM). The data and tag buses are ECC-protected.

The R4000 uses a 64-bit system bus called the SysAD bus. The SysAD bus was an address and data multiplexed bus, that is, it used the same set of wires to transfer data and addresses. While this reduces bandwidth, it is also less expensive than providing a separate address bus, which requires more pins and increases the complexity of the system. The SysAD bus can be configured to operate at half, a third or a quarter of the internal clock frequency. The SysAD bus generates its clock signal by dividing the operating frequency.

The R4000 contains 1.2 million transistors.[3] It was designed for a 1.0 μm two-layer metal complementary metal–oxide–semiconductor (CMOS) process. As MIPS was a fabless company, the R4000 was fabricated by partners in their own processes, which had a 0.8 μm minimum feature size.[4]

The R4000PC is packaged in a 179-pin ceramic pin grid array (CPGA). The R4000SC and R4000MC are packaged in a 447-pin ceramic staggered pin grid array (SPGA). The pin out of the R4000MC is different from the R4000SC, with some pins which are unused on the R4000SC used for signals to implement cache coherency on the R4000MC. The pin-out of the R4000PC is similar to that of the PGA-packaged R4200 and R4600 microprocessors. This characteristic enables a properly designed system to use any of the three microprocessors.

An example of a R4400MC microprocessor fabricated by Toshiba 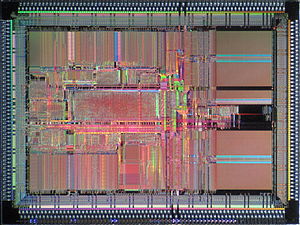 The R4400 is a further development of the R4000. It was announced in early November 1992. Samples of the microprocessor had been shipped to selected customers before then, with general availability in January 1993. The R4400 operates at clock frequencies of 100, 133, 150, 200, and 250 MHz. The only major improvement from the R4000 is larger primary caches, which were doubled in capacity to 16 KB each from 8 KB each. It contained 2.3 million transistors.